Marriage, adultery and the attempt to destroy the Eucharist

In the previous installment, I talked about Cdl. Wuerl's willful misreading of canon 915 and his attempts to justify sacrilege by giving Communion to pro-abortion politicians. In 2014, the debate shifted to Holy Communion to the divorced and civilly remarried, and it's on such grounds the new war over the Eucharist has been fought.

German cardinal Walter Kasper, who had fallen out of favor under Pope Benedict, experienced a swift rehabilitation under Pope Francis. Kasper's February 2014 keynote speech to the Consistory of Cardinals, where he advanced his proposal that those in adulterous unions should be allowed to receive the Eucharist, was praised by the Pope as "serene theology."

The strong opposition evidenced by a majority of cardinals in attendance was not manifested by Cdl. Wuerl; it's a short step, after all, from giving Holy Communion to the publicly impenitent to giving the same to the privately impenitent.

Wuerl and his like-minded cronies crafted a persuasive argument: Although the doctrine of the indissolubility of marriage could not be touched, the discipline could — including the longstanding discipline of withholding Communion from the divorced and civilly remarried. The justification was a renewed understanding of "mercy" — and in order to achieve his aims, Wuerl has consistently pitted mercy against the law, making the two appear in opposition.

"The reception of Communion is not a doctrinal position," he said just before last year's Synod on the Family. "It's a pastoral application of the doctrine of the Church. And that involves a number of things: It involves the mercy of God, the sacrament of reconciliation, the conscience of the individual person, the state of the soul of that individual person — all of those things are quite distinct from a statement in the doctrine of the Church concerning the nature of marriage."

As some have noted, the proposal to give Communion to those in objective adultery is not only an attempt to destroy marriage, but also has the ultimate purpose of destroying Church dogma on the Eucharist. The argument goes that not only would relaxing the discipline show implicit toleration and even approval of adulterous unions, thereby destroying belief in the indissolubility of sacramental marriage, it also leads to loss of belief in the Real Presence of Our Lord in the Eucharist. If it is indeed the case that the Eucharist is God Himself, and that God can only be received by those in the state of grace, to do otherwise would be to profane the Sacrament — to commit sacrilege, one of the gravest offenses that could be done against Our Lord.

Cardinal Wuerl's latest remarks continue the theme of false opposition between mercy and the law. Commenting on the 2015 Synod on the Family, he said, "The frame of reference now is no longer the Code of Canon Law. The frame of reference is now going to be, 'What does the Gospel really say here?'"

Cardinal Burke himself has addressed such anti-law attitudes. In a 2012 speech, he said:

This antinomianism embedded in civil society has unfortunately infected post-Council ecclesial life, associating itself, regrettably, with so-called cultural novelties. Excitement following the Council, linked to the establishment of a new Church which teaches freedom and love, has strongly encouraged an attitude of indifference towards Church discipline, if not even hostility. ... An interest in the discipline of the Church is not to be equated with an idea contrary to the mission of the Church in the world, but to a correct attention to cohesively witnessing to faith in the world.

And canon lawyer Dr. Ed Peters rejected Wuerl's remarks, saying, "[It] confirms the stranglehold that antinomian attitudes have secured over ecclesiastical thought in the space of one lifetime, to the point that today, many in the highest circles of ecclesiastical leadership can scarcely even talk about canon law without caricaturing it."

No "Mercy" for Teachers of Orthodoxy

Although Cdl. Burke had enjoyed the esteem of Pope Benedict and occupied multiple positions of high rank in the Curia, he quickly found himself booted from key roles one after the other in 2013 and 2014, removed from the Congregation for the Causes of Saints, the Congregation for Bishops, and then as prefect of the Apostolic Signatura, and instead given a largely honorary position as patron of the Sovereign Military Order of Malta.

Insiders speculate Wuerl — appointed to the Pope's Gang of Nine and who has the Holy Father's ear — was behind the demotions. This speculation was reinforced when Wuerl himself was appointed to replace Burke on the Congregation for Bishops in 2013. The pastoral tone often struck by Wuerl in his public interviews fools no one, least of all those who know him; the mercy he publicly touts gives way, when the occasion calls for it, to private ambition and vindictiveness. Sources say he has never forgiven Burke for publicly opposing him on the question of canon 915, and now under the new regime, sensing more favorable winds, Wuerl is taking full advantage of his newfound influence.

His cunning was evident at the 2015 Synod on the Family, where Wuerl painted those who opposed his progressive agenda as enemies of the Pope. After several Synod Fathers expressed concern over possible liberal manipulation at the Synod, Wuerl — instead of addressing the substance of their claims — did what any shrewd politician would do when caught: He impugned his opponents' integrity. In an interview with America magazine, Wuerl said:

I wonder if some of these people who are speaking, sometimes surreptitiously, sometimes half-way implying, then backing off and then twisting around, I wonder if it is really that they find they just don't like this pope. I wonder if that isn't part of it.

The comments put orthodox prelates on the defensive, who scrambled to go on record to deny the charges — but the damage had been done. Now any bishop who breathed a word of criticism against Synod procedure or potential Synod hijacking would be immediately suspect. Creating a distraction, the focus would no longer be on addressing their legitimate concerns but rather on their personal character and trustworthiness. For Cdl. Wuerl, it was mission accomplished.

Christ Defenseless
Venerable Abp. Fulton J. Sheen, when asked why he made a Holy Hour every day, recounted his inspiration: an 11-year-old Chinese girl who ended up a martyr for the Eucharist. The story goes that during China's 1911 Republican Revolution (or the earlier Boxer Rebellion), when anti-Catholic sentiment was rife among the insurgents, rebels seized a parish in a rural province, confined the pastor to house arrest, and desecrated the church. The priest watched from his window as an insurgent grabbed the ciborium from the Tabernacle and scattered 32 consecrated Hosts on the floor.

A Chinese girl, hiding at the back of the church, witnessed the desecration and was horrified. Determined to rescue the Hosts, she resolved to return late each night to make a Holy Hour. Sneaking past the guard, she would kneel on the floor, adore Our Lord in the Blessed Sacrament, and bend down to receive one Host directly on her tongue. In spite of the risk to her life, she continued this nightly, until the 32nd night, when — after consuming the last Host — her presence awakened the guard, who ran over and beat the girl to death with his rifle.

As a young seminarian, Sheen was so humbled and inspired by this little girl's conviction and love for Our Lord that he swore to do a Holy Hour daily for the rest of his life — a promise he kept. This girl's love was mirrored in other saints, like St. Tarcisius, the "Saint of the Eucharist," a 12-year-old boy who also chose to undergo martyrdom rather than allow Our Lord to suffer desecration.

But such notions as suffering and even dying to protect the Sacrament from profanation are foreign to prelates like Cdl. Wuerl, who can hardly stand to suffer a few words of criticism from the press. One imagines this prince of the Church, this successor to the Apostles, consecrated to guide and, if need be, die for his flock, would find the zeal of these child-saints quaint, overwrought, fanatical.

Little wonder Our Lord said, "Let the children come to me, and do not hinder them; for to such belongs the kingdom of heaven" (Matt. 19:14), while for shepherds who misuse their authority, mislead their flock and leave Christ defenseless, He reserves the terrifying warning:

To learn more about the Eucharist, Church teaching on marriage, and authentic mercy, watch ChurchMilitant.com's Remaining in the Truth: Kasper's Broken Mercy. 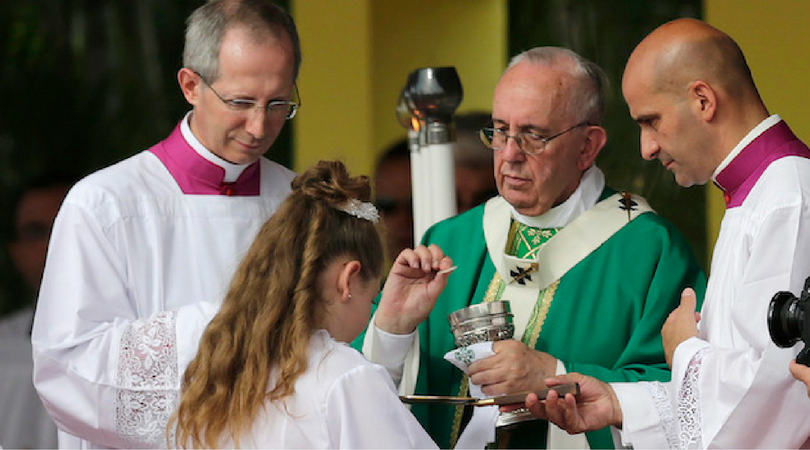