Get the new book by Russ Voris!

Get the New Book by Russ Voris! 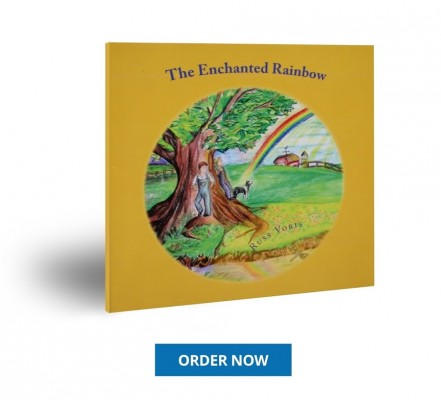 One thing that doesn't get talked about much in the white hot heat of the homofascists' movement is their theft of cultural imagery and language — for example, the word "gay," and then the rainbow.

Those words and images don't belong to people who have sex with their sex. They just stole them. To show you how insidious this has been, we'd like you to see this book. It's called The Enchanted Rainbow.

In 2015, the title would imply some sordid homosexual drug trip, but that's not what it's about at all. It's a sweet little children's book hearkening back to a time of innocence. It's close to 50 years old now and presents a time when boys were boys, fathers were fathers, and evil didn't rule the world.

I have a deep affinity to this book because it was written for me by my father when I was a little boy.

It recounts the time he spent as a young boy on his uncle's farm during the summer of 1945, far away from the destruction of a world war. My father often tells me of that magical summer for him, when he and two friends frolicked around his Uncle Bill's farm doing what all young people do: goof around, jump in the creek, race each other down dirt paths.

When I was a little boy, he would tell me about that summer and decided to write a little story for my brother and me. Having a fertile imagination, he added to the pleasant memories by creating a fictional set of fairies called Rip, Zip and Zing, and gave the book its original title of The Rainbow Fairies.

The original typed-out manuscript got lost somehow in all our moving around in the U.S. Air Force, so a number of years ago I suggested to my dad that he should rewrite the book — which he did.

The Enchanted Rainbow is that new work. So after he rewrote it a number of years back, he and I stumbled across it about a year ago and reread it.

What a difference a half-century makes. All the talk of rainbows and fairies now carries all kinds of baggage with it that it did not used to. Think about this for a moment: A book written by a loving father to his two young boys back in the 1960s now has language in it that could easily mean something other than what it meant originally. Even the ability to transmit a legacy of love has been affected by this rotten evil. My dad Russ wrote this for a pure, simple reason — and even that has become marred.

The studio had a book signing here for locals a few weeks back as my dad finally got to see his dream of many years come true. With the help of a splendid father at our parish and his large family, m dad made some revisions to the book, taking the current corruption of vocabulary into account, and changed it from a kind of fairy tale into more of a children's book about the Faith.

The original storyline and plot are still very much there, but this just goes to show how far this evil has progressed. The illustrator of the book is one of the children in the parish family, and she did a splendid job bringing the story to life through her drawings.

My dad has been busting at the seams with excitement over his book being able to get into the hands of other people so he can share the memories of a more innocent time — the same memories he shared with my brother and me.

So we are announcing that The Enchanted Rainbow by Russ Voris is now officially for sale, and you can purchase a copy by just clicking on the link. The profits will go to help our PAUSE program, which begins next month. We encourage you to get some copies for your own children or grandchildren.

Dads: Father's Day is coming up, and I can tell you from firsthand experience what a tremendous gift if would be from you to your children on Father’s day then to take your little boy or girl in your lap and read them this delightful story.

There are very few things left in life these days it seems that are pure and simple. This story is one of them. So please, help support us and give a thrill to a longtime dad — my own — and buy some copies for your loved ones.

The supply is unlimited, but the first 50 ordered will bear my dad’s autograph — first come, first served.

One final word: The day of the book signing, my dad looked up and what did he see almost directly over us? A rainbow circling the sun.