A Response to Erica Kauffman

You are not signed in as a Premium user; Premium users get 10% discount in the store! Sign in or Sign up today!

In the spring of 2020 Kauffman privately contacted Church Militant to share her story about sexual assault by Fr. Pablo Arzuaga, an SSPX priest who reportedly sexually assaulted her multiple times as a young adult woman. (She has since aired her story in a public video.)

She agreed to the terms of the on-camera interview: It would last 20 minutes, we would use soundbites for our Spotlight and would link to the full-length interview (just as we did with Jassy Jacas). She agreed.

The on-camera interview took place via Skype and we gave her twice as much time. At the end of the interview, we asked if there was anything else she wanted to cover. She said, "No." We ended on friendly terms.

Shortly afterward, she got cold feet and changed her mind. She asked us not to air the story. We honored her request.

After we aired our April 22 Spotlight exposing widespread abuse and cover-up in the SSPX, Erica became critical, refusing to believe allegations against Fr. Ramon Angles (accused of raping an adolescent boy who went on to commit suicide) or Fr. Kenneth Novak — both priests whom she knew personally. She dismissed the victims as liars and the witnesses as mentally unstable. When we pushed back and challenged her, asking how it would feel if others dismissed her own abuse story as a lie and asking why she refused to apply the same standard to herself, she became irritated and increasingly upset.

While she has demanded that everyone believe her story about abuse at the hands of Fr. Arzuaga, she is essentially demanding that no one believe the victims of Fr. Angles or Fr. Novak.

She then fabricated stories about how Church Militant was failing to honor our request not to air her story — a complete falsehood. In June, Church Militant received a letter from her attorney, Sam Mclure, threatening legal action based on Kauffman's claims. We responded explaining everything, and received a "Thank you" from the attorney — and never heard from him again.

While Kauffman has been spreading misinformation that she received "nasty" texts and emails from Church Militant, leading to her blocking us, we have a record of all the texts and emails, and her claims are false. Kauffman turned against Church Militant because she did not enjoy being challenged on her dismissal of other abuse victims or witnesses, nor was she willing to believe the allegations against Fr. Angles or Novak. 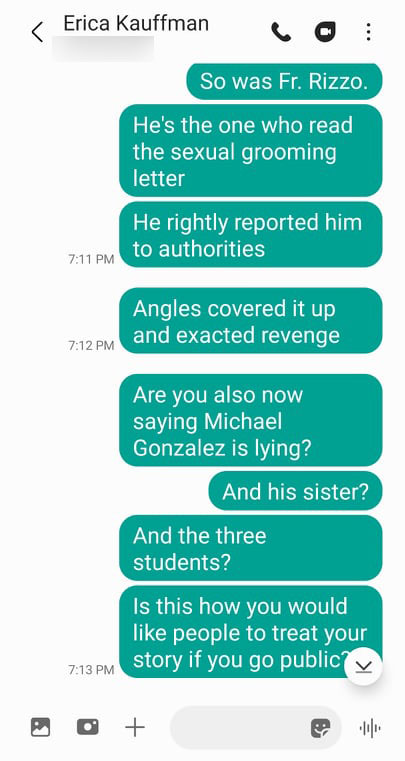 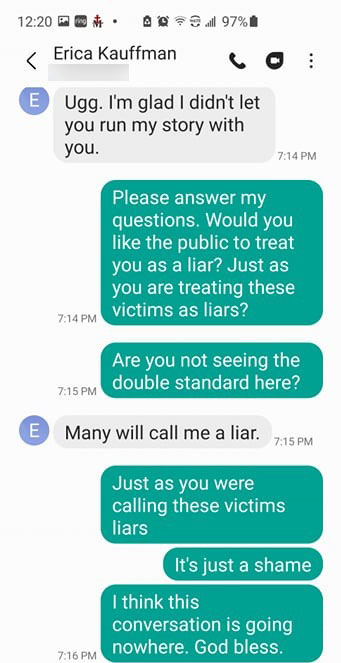 Kauffman also reportedly created a fake Twitter account publicly revealing the details of her abuse, while falsely accusing Church Militant of outing her.

We sympathize with Kauffman's plight and the fact that, as a young and vulnerable woman, she was taken advantage of by an SSPX priest. We know of too many stories like this. But her past trauma does not excuse her current dishonesty, which discredits other SSPX abuse victims and undermines investigations into SSPX abuse and cover-up. We will not allow victims of clergy abuse to suffer harm because of Erica's bad behavior.

View our complete coverage of SSPX abuse and cover-up