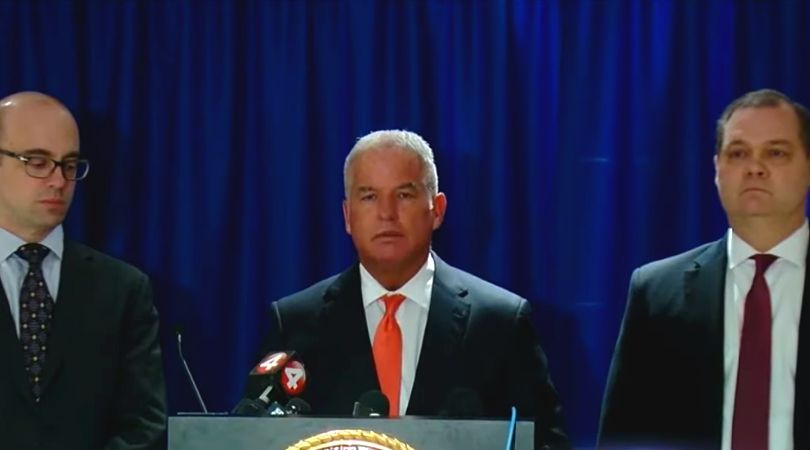 'The McCarrick Mafia has cooperators in every diocese'

Church Militant recently reported on the arrest of a Buffalo cyberstalker who had threatened ABC affiliate WKBW reporter Charlie Specht. The story hits pretty close to home with me — not just because the accused was a mild-mannered professor, but because his alleged death threats targeted a reporter who was hot on the trail of homosexual hijinks and malfeasance in the Buffalo diocese.

Half a lifetime ago, I was a U.S. Senate staffer hot on the trail of drug traffickers using Caribbean trade routes to bring tons of cocaine into the United States. During the summer of 1984, I flew to Miami to prepare the groundwork for a Senate hearing.

As soon as I got off the plane, two men came up to me and wasted no time introducing themselves. "We're federal agents," one said, showing me his ID. "You've had death threats from the Colombian drug cartel. They know you're in town, so you're going to be seeing a lot of us in the next few days — like all day and all night."

They weren't kidding, and I found out pretty quickly. When we got to my hotel room, there was a big vase of flowers on the table — a joke, it turned out, from a friend in D.C. who worked in the same hotel chain.

Well, my federal friends didn't think it was a joke. I spent two hours sitting on the radiator at the end of the hallway while the K-9 team sniffed out the place for a bomb.

That's why in Buffalo, the FBI quickly took the proper precautions to protect intrepid reporter Charlie Specht and his family. The message: Death threats have to be taken seriously because those making the threats take themselves very seriously. They will kill with abandon. With the Colombian cocaine cartel, it's money, and everything money can buy — power, sex, and swagger galore — even murder. After all, the urge to kill can destroy many a good man.

But what about the Sodomite Syndicate? With them, it's the power, sex and lust that they have successfully been able to keep secret for decades. They don't like being investigated.

"A clandestine pipeline for homosexual seminarians was established in the 1990s and into the early 2000s," Church Militant reported in 2018, "where active gay men from Colombia, South America were being secretly funneled to U.S. seminaries."

Well, well — surprise! My old pals in the Colombia cocaine cartel were working with you-know-whom!

Don't believe me? OK, let's connect the dots. Any trafficking pipeline is run by a gang, period. Some of them are very powerful, and there's a lot of competition. That's why so many "coyote" traffickers in Mexico are killing each other in shootouts near the U.S. border — the trade is so lucrative that major gangs compete, violently, for the routes, the suppliers and the products. In the case of Mexico, the "products" include sex slaves, drugs and terrorists.

Ace reporter Charlie Specht's alleged stalker has been arrested. But the message has been sent, loud and clear, by the usual suspects: if you dig too deep in the wrong direction, well — we know where you live.

But those products also include illegal aliens heading for the non-governmental organizations of the U.S. Conference of Catholic Bishops (USCCB) and other "charities" in the United States that "care for" them. It's Economics 101. The coyote killers see a lucrative market in illegals, so they're glad to provide the supply to meet the USCCB's demand.

Cui bono? The coyotes get $5,000 a head (yes, like cattle) from the illegals. The USCCB receives hundreds of millions from the taxpayer. Everybody wins, which might explain why U.S. bishops never criticize the coyotes who provide their clients. And no coyote ever kills a bishop — at least on our side of the border. Likewise, it would be a rare and daring bishop to dare tell the illegals to "save your money, stay home and keep your family together." After all, a coyote who sees somebody moving in on his customer base can become very nasty very quickly.

Nasty? Yes indeed. There's a lot at stake in the illegal drug trade — billions. That's why my new federal friends in Miami were watching my back. The Colombian cartel has massive U.S. informers, mules, cooperators, terrorists and — yes, assassins — at its disposal. Sure, there's a lot of money in the illegal alien trade, but there's more than that: If it's not money that silences our bishops regarding the coyote combine, it might well be fear.

Condemn the coyotes? Are you crazy? A bishop demanding that the FBI and the border patrol curb the illegal flow and capture the coyote kingpins? No way! The coyotes kill with abandon. With them you aren't innocent until proven guilty, you're guilty until they shoot you. Then you're dead — simple as that.

Connect the Dots Within the Church

So what's the connection? Well, it's undeniable that the pipeline of sodomite priests exposed by Church Militant is oiled by the same gangs — paid with the same filthy lucre — that run the flow of drugs, sex slaves and illegals. The sheer violence and terror that saturates the trafficking trade goes far to explain why even our good bishops would be afraid to challenge the coyote gangs. Bishops might have guards, but how about the priests? Mexico is the most dangerous country in the world for priests. Do our bishops want to give the killers any reason to up the ante?

Let's look at the Buffalo arrest again. The McCarrick Mafia has cooperators in every diocese. We've seen over and over how the Sodomite Syndicate is grim, mean and vicious. Like the cartels, homosexuals usually exercise their violence among themselves — just ask any emergency room doctor in Washington, D.C. But if you cross them, who's going to watch your back?

For whatever reason, neither the coyotes nor the McCarrick Mafia have to worry about the Catholic bishops. Silence is golden. But what about journalists who probe too deeply? Forget the mild-mannered history professor. What about the vindictive coyote who's protecting his market share in the pipeline? You think he's going to settle for a couple of threats on an answering machine?

Ace reporter Charlie Specht's alleged stalker has been arrested. But the message has been sent, loud and clear, by the usual suspects: If you dig too deep in the wrong direction, well — we know where you live.

Better watch your back.