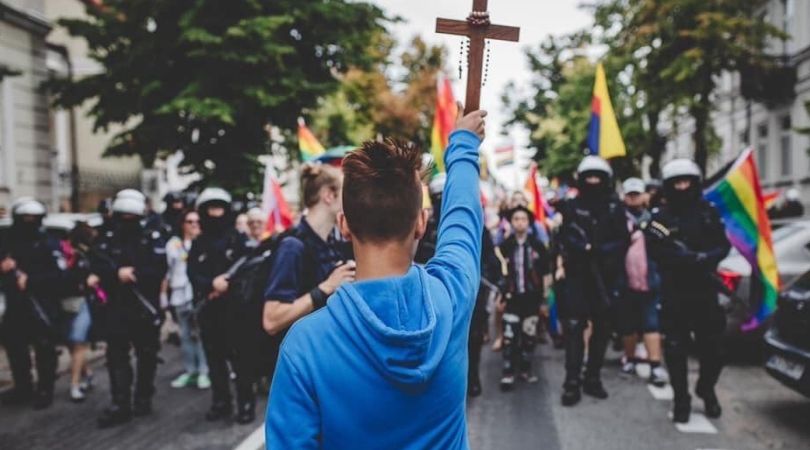 LGBT issues boil over in Poland ahead of October elections

PŁOCK, Poland (ChurchMilitant.com) - A 15-year-old Polish boy is being hailed as a Catholic "hero" after daring to block an LGBT pride march with a raised crucifix and Rosary in his hand.

Jakub Baryła, who describes himself as "Catholic, traditionalist, conservative and patriotic" on Twitter, has become a social media sensation after standing in the path of a 1,000-strong LGBT equality march in the city of Płock on Saturday.

Jesus and the cross stood against evil and sins. Our holy faith commands us to counteract evil deeds.

Baryła, who is a councilor at Płock Youth Council, said that he decided to block the march with a crucifix after he was inspired by "a similar gesture by Fr. Ignacy Skorupko during the Warsaw battle with the Bolsheviks in 1920."

Father Skorupko was a Polish army chaplain who was killed on Aug. 14, 1920, at the Battle of Ossów during the Polish counter-attack. Standing with soldiers leading a charge on the front lines, the priest was holding a cross to encourage Polish soldiers.

Baryła says he initially gave up this idea "because of social consequences. I was afraid of how people would react," he told the conservative media website wPolityce.pl.

However, he changed his mind and decided to act when he saw a blasphemous icon of Our Lady of Częstochowa with a rainbow halo at the Płock LGBT parade:

I asked for a cross from a priest from a Płock parish. The priest was afraid of atheists profaning the Holy Cross, but he gave me a crucifix. I wanted as many people as possible to see my gesture. I wanted to make them reflect and discuss. First, I walked with a cross in my hand in front of the police cordon protecting the Equality March.

Later I sat on the pavement and prayed in Latin with the words Salve Regina. I directed my prayer to the Mother of God, the ideal of purity. Policemen came to me and asked me to get out of the way. I said I couldn't do it because the participants of the march are destroying my Catholic faith and profaning the Polish flag by placing a rainbow on it.

Riot police in body armor bodily lifted Baryła after he refused to get out of the path of the marchers.

"I didn't think about fear. I was focused on the cross I was holding. I am Catholic, so I focused on God who gives me strength. I have the impression that God was directing me," he said, adding that the police behaved "impeccably."

Baryła is being praised around the world for his courage.

"Thank you Jakub Baryła for your courageous witness to Christ before armed police and an LGBT 'pride' march," English writer and Catholic deacon Nick Donnelly tweeted.

Thank you Jakub Baryła @JakubBary for your courageous witness to Christ before armed police and an LGBT 'pride' march pic.twitter.com/JkHO4M9M1g

"My hero of the month is this young Polish brother, who goes by the name of Jakub Baryła. Only 15 years old and already standing bravely for the Holy Faith against the LGBT degeneracy. May the Almighty bless him!" Guillaume Von Hazel, a Catholic from Köln, wrote.

My hero of the month is this young polish brother, who goes by the name of Jakub Baryła. Only 15 years old and already standing bravely for the Holy Faith against the LGBT degeneracy. May the Almighty bless him ! @JakubBary #Płock #catholic pic.twitter.com/qMOA6IDzp9

However, the Monitoring Center on Racist and Xenophobic Behaviour, Warsaw, has issued a statement calling Baryła's action "another example of nationalists using children for political struggle."

"Irresponsible parents have jeopardized the life and health of their 15-year-old child by sending him to a riot to intentionally hinder the police. The lost boy stood in the middle of the road clutching the cross. The child was confused and completely deprived of care by adult caregivers," the statement said, insisting that Baryła was a child and no one had the right to send him to fight the police.

"It seems that the parents have been indoctrinating their child for a long time," the statement added, accusing Baryła of being "seen at meetings with racists and homophobes."

Monitoring Center on Racist and Xenophobic Behaviour said it intends to notify the prosecutor's office of a "crime committed by parents who sent a child against police officers" and will provide the Family Court in Płock with information "about a boy who, unaccompanied, hindered police operations."

In response, Baryła issued his own statement: "I hereby declare that no one sent me to this blockade, and my parents have mostly rather leftist views."

"I am 15 years old, but I understand the reality that surrounds me and I can make decisions consciously," he added, pointing out that he does not wish to gain popularity or use this as a ladder to a political career.

"I read in the media that my deed will serve me in my political career. It's not true. I don't care. I don't want to be a politician. I would like to become a priest," he said.

"Jesus and the cross stood against evil and sins. Our holy faith commands us to counteract evil deeds. I also tried to do it. Saying that I was going against people is harmful, I was going against the bad deeds that are promoting homosexuality," he wrote, quoting the words of a certain Fr. Kramer.

The LGBT parade in Płock, about 100 kilometers northwest of Warsaw, follows the pride parade in Bialystok in eastern Poland, which was marred by violent clashes three weeks ago.

Politicians, including Robert Biedroń, one of Poland's first openly gay politicians who launched the leftist Wiosna party earlier this year, attended the march.

LGBT rights have become a hot button issue in Poland ahead of a parliamentary election in October. 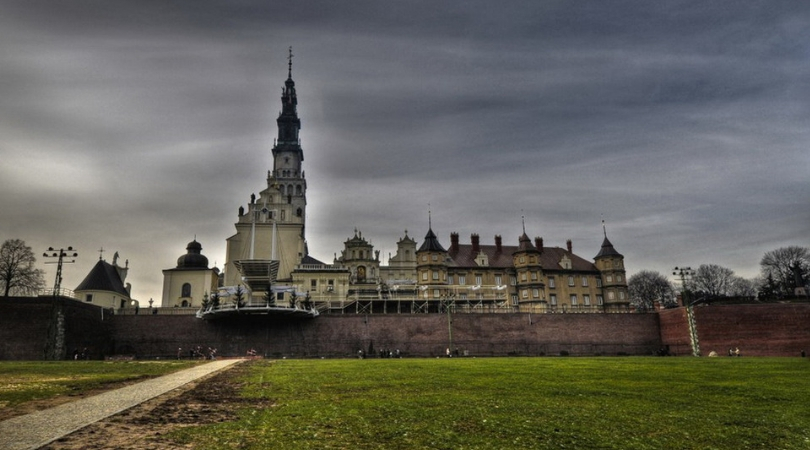 Is Poland Still a Catholic Stronghold?
By Church Militant   •   0