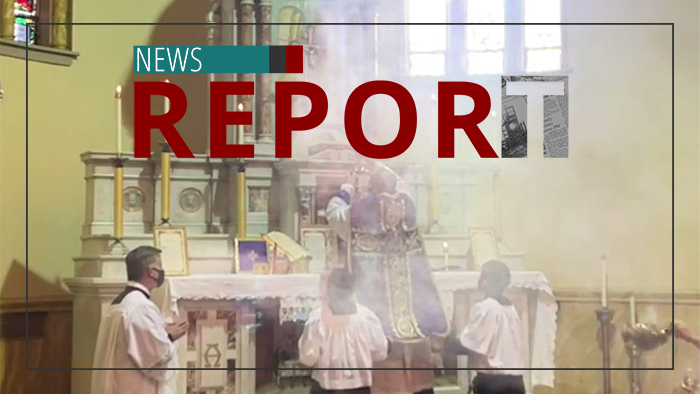 A community in New Jersey is celebrating 20 years of the Traditional Latin Mass.

The Jersey City Latin Mass community reached this anniversary landmark on Sunday, coinciding with Pentecost. Church Militant's William Mahoney has more from some of the community's members.

After attending the TLM on Sunday, the Jersey City Latin Mass community met for a repast.

Tony and Rosie (community members): "We've been newcomers — five years we've been here, but it's been great; it's a great community."

Members of the community celebrated with talks and songs.

One of the younger members of the community, 20-year-old Timothy Connell, told Church Militant: "The Latin Mass felt like the answer to a question I didn't even know I had. It was the first time I had seen a eucharistic celebration match the beauty, solemnity and reverence I felt appropriate for the sacrament."

James Reilly and his wife, Mercy, echoed Connell's reflection, asserting, "The Latin Mass restores the mystery and grandeur of the Liturgy."

Mary Lawlor (community member): "They say when you're at church you should feel like you're experiencing Heaven — and that's how I feel when I'm there. It's just so godly."

Another member of the community, Dan Sexton, explained the TLM offers peace and comfort in a way nothing else in life can.

He added: "This is why the members of the Jersey City Latin Mass community have not allowed the many attempts to suppress the Mass to succeed."

The Jersey City community — and other groups like it worldwide — show the Mass of the Ages will continue through the ages despite efforts to suppress it.

Father John Conroy offered the first documented Mass in Jersey City in 1829 on the first Sunday of Advent; it was, of course, a TLM.