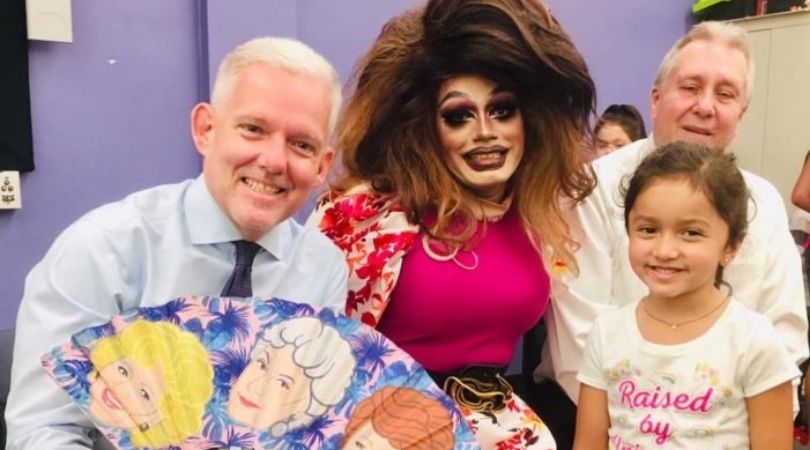 Many see move as way to sneak LGBTQ agenda onto children

NEW YORK (ChurchMilitant.com) - New York City has allocated $25,000 in the city's 2020 budget for Drag Queen Story Hours (DQSHs), a move many are seeing as a venue for indoctrinating children into LGBTQ lifestyles.

Council Members Jimmy Van Bramer (District 26) and Daniel Dromm (District 25) joined New York City-based drag queen Angel Elektra at the Jackson Heights public library in Queens to celebrate the increase in funding for reading programs. Van Bramer and Dromm identify as gay and have already earmarked $5,000 for the libraries in their respective districts.

"I am especially proud to support Drag Queen Story Hour, a wonderfully imaginative and inclusive program for kids that encourages acceptance and a love of reading," Van Bramer chimed in. "Drag Queen Story Hour provides all kids with a space to be themselves and to see queer role models — something I desperately needed as a kid."

Drag Queen Story Hour provides all kids with a space to be themselves and to see queer role models.

In public libraries like the one in Queens, drag queens read stories about inclusion, like Julián Is a Mermaid (about a little boy who wants to dress up like mermaid ladies) and Neither (about a little creature that's not quite a bird and not quite a bunny). Other books like And Tango Makes Three or Prince & Knight include LGBTQ characters.

DQSH workshops include "A Child's Room to Choose: Encouraging Gender Identity," "Expression in School and Public Libraries" and "Are You Going to Tell My Parents?: The Minor's Right to Privacy in the Library."

Parents and concerned citizens have become more skeptical of the powers pushing DQSHs into local libraries and have pushed back in various ways.

Parents across the country are acting on the local level to push back against the ALA (American Library Association), secular humanist organizations and LGBTQ groups' efforts to introduce children to age-inappropriate concepts and materials. They're petitioning the library boards, organizing protests and prayer vigils and calling taxpayer funding into question.

Quale believes in the "power in the local community," saying:

Parents, concerned citizens and local officials must continue to band together to uncover these events and put pressure on the local library. In situations where a third party is sponsoring an event, people can focus on who appoints library board members, who is over the library's budget and which local officials may be up for re-election.

In an article posted on the Personhood Alliance website titled "Behind The Chiffon Curtain: Drag Queen Story Hours And Child Endangerment," Quale exposes "an intentional movement within the American Library Association (ALA) to bring LGBTQ-promoting events into libraries across the country."

She goes on to discuss "secret librarian advocate operative[s]" sneaking LGBTQ books and materials into current programs and using outside sponsors to host DQSHs in "resistant communities."

The ALA has specifically instructed libraries and third-party event sponsors to couch all of this in First Amendment rights. It is absolutely critical for parents, concerned citizens and legislators to not fight this on these grounds. This allows the drag queen to be the victim. The real victim here is the child, who cannot consent to being exposed to ideologies they can't yet process and who is being put in dangerous situations where adult men who regularly entertain other adult men have access to them.

Groups are beginning to argue that questions posed matter-of-factly on websites like the question on the Brooklyn Public Library website actually skew children in a political direction:

What do drag queens and children have in common? They love dressing up and all things sparkly and fancy! Drag Queen Story Hour captures the imagination and play of the gender fluidity in childhood and gives kids glamorous, positive, and unabashedly queer role models.

Working at a local level, Georgia Kijesky, leader of Personhood Maryland, helped organize a prayer vigil on June 23 during the DQSH and Drag 101 events at her local library in Lexington Park, Maryland.

Petitions protesting DQSHs have also sprung up — one sponsored by Personhood Alliance and signed by 43,000 people and another sponsored by a partnership between CitizenGo and the Activist Mommy which was signed by 56,000 people — both delivered to the ALA on July 11.

About the protests against DQSRs, Jonathan Hamilt, co-founder of Drag Queen Story Hour whose drag name is Ona Louise, said, "I guess the backlash is growing because it is getting more popular."

"But the love and support for Drag Queen Story Hour has trumped the hate, even though both have grown," Hamilt added.

But, according to Quale, more communities are demanding to know: "What's really behind the values DQSHs are said to promote? Do DQSHs actually provide children with positive role models or expose them to dangerous men?"

She said to Church Militant, "The key here is to keep shining a light on all of this and recognize that this is a large, intentional movement, not just a series of isolated events."