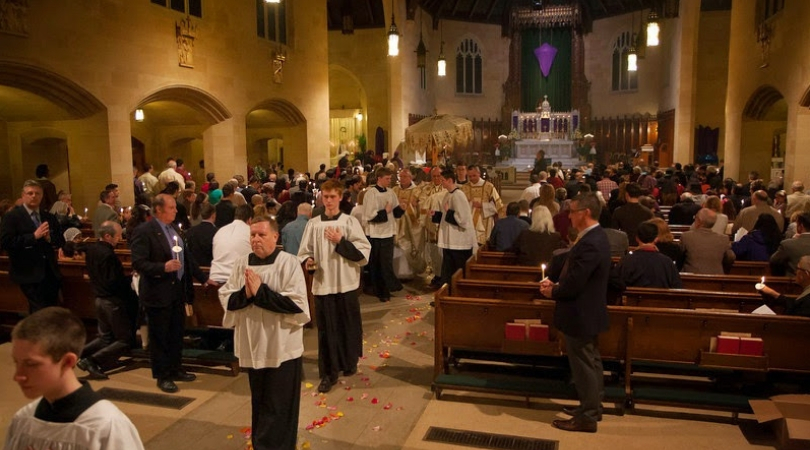 DETROIT (ChurchMilitant.com) - More than 50 altar servers are vouching for the moral integrity of Detroit's Fr. Eduard Perrone, placed on leave after a single 40-year-old allegation of abuse arising from a "repressed memory."

The longtime priest, known for his orthodoxy and promotion of traditional liturgy, as well as his attempts to expose the homosexual priestly network in Detroit, was placed on leave July 5 by the archdiocese of Detroit. It issued a letter explaining his removal the same day, while leaving out any mention that Perrone categorically denies the allegation and maintains his innocence.

Since then, 51 men who at one time served as altar boys for Fr. Perrone have signed affidavits testifying to his character.

"We are all altar boys who have served with Fr. Perrone at some point over the years," the letter states.

It notes that during that time:

"Collectively, we have spent tens of thousands of hours with Fr. Perrone in circumstances like these, among others," the letter continues. "Many of us were vulnerable at some point during this period, due to young age or other factors."

None of us have ever experienced, or observed, any immoral or inappropriate behavior by Fr. Perrone.

"However, none of us have ever experienced, or observed, any immoral or inappropriate behavior by Fr. Perrone in connection with his interactions with altar boys or any other parishioners," it reads.

The letter notes that they have never witnessed from the priest "Inappropriate physical contact," "Suggestive conversations," Emotional abuse or coercion," or "Encouragement or facilitation of underage drinking."

A fundraising page to contribute to Fr. Perrone's legal defense has already raised about $1,500.

Critics note that the July 5 letter issued by the Detroit archdiocese ignores Pope Francis' Feb. 21 guidelines on handling sex abuse allegations, which set forth 21 points by which he recommends all sex abuse investigations should be handled.

Not only did the archdiocese act contrary to this guideline, it failed to mention Perrone's own claims of innocence.

Perrone's story has made national and even international headlines, with articles in The New York Times, Boston Globe, Washington Post, and even the Fox News ticker featuring the story in Times Square.

In spite of millions having seen the story, Fr. Perrone is not allowed to make a single statement in his defense, the archdiocese placing a gag order on him, even denying him the chance to speak with parishioners.

The gag order was announced by Msgr. Michael Bugarin, episcopal vicar and delegate for matters of clergy misconduct, who is spearheading the case against Perrone, at a parish council meeting held at Assumption Grotto on July 6.

A parishioner who had asked Bugarin in the vestibule at the weekend Masses whether she could text Fr. Perrone was told that text messages are discouraged, as it would violate their gag order.

Meanwhile, Church Militant is aware of multiple people to whom Bugarin has spoken about the case — arguably violating pontifical secrecy while holding Perrone to strict silence.

The Canon Law Society of America published a text in 2004 providing professional guidance on how to implement the U.S. bishops' norms governing sex abuse allegations. The archdiocese's actions with regard to Perrone are a clear violation of the text:

In undertaking the preliminary investigation, a diocese would also violate the principle of confidentiality if it made a public announcement naming a priest and saying that he has been accused of sexual misconduct or if it issued a public statement about the findings issued by the diocesan Review Board, which are of their nature preliminary and canonically inconclusive. ... Such violations of confidentiality by a diocese irreparably damage the reputation of the accused and create a virtually insurmountable obstacle to the appropriate exercise of his ministry.

While a priest could vindicate his rights canonically, the note states that "it is difficult to see how his name could be restored adequately after the damage to his reputation was done." Such a priest might have a case for defamation in a civil lawsuit.

The Detroit archdiocese is notorious for having fostered an environment where active homosexual clergy have flourished. Not only is Detroit home to the longest-running Dignity Mass in the country (a dissident, pro-LGBT group), Abp. Allen Vigneron allows diocesan priests to offer such dissident Masses on a regular basis.

Mary Healy, Professor of Sacred Scripture at Sacred Heart Major Seminary, even admitted publicly at a conference that the reason Vigneron won't put an end to the Dignity Masses — which have caused scandal to local Catholics for decades — is because he fears a rebellion from gay priests.

"I know of two people of higher stature than me who have spoken to the archbishop," Healy said at the Dec. 6 Catholic Men's Movement meeting at Christ the King parish in Ann Arbor. "I have heard [he does nothing] because he is taking into account how some priests would be in rebellion."

Fr. Randy Phillips, a notorious Detroit Dignity priest, is asked by Church Militant staff
why he hangs a large rainbow pride banner in his church

When Vatican officials came for the first visitation in about 1982 at St. John's Seminary, which was proudly labeled the "Pink Palace" by local homosexuals, Detroit's Cdl. Edmund Szoka was able to prevent any real discussion of the homosexual culture there, until the final day, when Fr. Eduard Perrone forced the issue by secretly delivering a long and detailed dossier about the seminary's homosexual culture to the visiting Vatican official.

The story of amazing intrigue — and courage — by Perrone is included in Michael Rose's profile of Perrone in his book, Priest: Portraits of 10 Good Men Serving the Church Today. Since 1994, Fr. Perrone has been pastor of one of the most orthodox parishes in the Detroit archdiocese, Assumption Grotto Church.

Perrone's dossier led to the Vatican forcing Szoka to shut down St. John's and consolidate the major and minor seminary at Sacred Heart Major Seminary in Detroit.

During his priesthood, Perrone faced opposition from the archdiocese, which opposed Perrone's catechism, claiming it was doctrinally in error. The priest defended himself against the charges, the case was appealed to Rome and the Vatican ultimately sided with Perrone.

Perrone founded Call to Holiness in direct response to the heterodoxy and dissent promoted by Call to Action, the U.S. bishops' gathering that promoted female ordination, the abolition of priestly celibacy and relaxation of strictures on contraception and homosexuality. Call to Action was founded by Detroit's Cdl. John Dearden, a leading liberal voice in the Church.

The Detroit archdiocese is notorious for having fostered an environment where active homosexual clergy have flourished.

Father John Hardon, the Jesuit known for his orthodoxy and who suffered persecution by Detroit clergy, and who mentored Perrone, said of Call to Holiness, "History may show that Call to Holiness was the spark that ignited the restoration of authentic Catholicism in the United States."

Detroit has a long history of protecting homosexual predators, including Fr. Gerald Shirilla, removed from active ministry in 1992 after multiple credible allegations of pederasty spanning decades.

Unbeknownst to the public, Shirilla was secretly placed back in active ministry in the neighboring Gaylord diocese after Cdl. Adam Maida, then head of the archdiocese of Detroit, approved the move with Bp. Patrick Cooney. When local Catholics discovered a homosexual predator was assigned to their parish, outcry ensued, leading to his removal, while the Detroit archdiocese claimed it knew nothing of the decision — in direct contradiction to Cooney's own public statements explaining he'd received Maida's cooperation in the assignment.

Shirilla's most famous case involved abuse of the Paciorek brothers, some who were professional baseball players, who were each abused by the priest.

McNally has written of how he lost his job as editor of The Michigan Catholic for refusing to go along with the archdiocese's cover-up of Shirilla.

The Detroit archdiocese has caught flak after photos surfaced showing that, contrary to its own public statement, it invited Abp. John Nienstedt to concelebrate Mass with Abp. Allen Vigneron last summer at Sacred Heart Major Seminary.

Nienstedt resigned in disgrace in 2015 from the see of St. Paul-Minneapolis after witnesses revealed he covered up sex abuse of his alleged homosexual partner, Fr. Curtis Wehmeyer, who wound up spending five years in prison for sexual assault of a minor and possession of child pornography.

Although Nienstedt has denied all allegations of cover-up or homosexual activity, a cache of 1,000 documents from the Ramsey County prosecutor's office, including police reports, witness interviews and affidavits, show that multiple witnesses across three dioceses have testified to Nienstedt's behavior, including retaliation against priests and seminarians who refused his sexual advances, sighting him at gay bars or cruising gay parks, and intimate association with Wehmeyer, whom he gave preferential treatment and kept in active ministry in spite of complaints of sex abuse.

When the public discovered Nienstedt had returned to Detroit (he spent a number of years here as rector of Sacred Heart Major Seminary, while Vigneron was vice rector), the archdiocese issued a public statement on the matter:

In direct contradiction to the archdiocese's statement, however, Nienstedt can be seen in photos concelebrating Mass on June 19, 2018 at Sacred Heart Major Seminary with longtime friend Vigneron.

Church Militant asked the archdiocese why it invited Nienstedt to concelebrate Mass, in direct contradiction to its public statement, but received no response.

Bugarin, who is leading the charge against Perrone and has made derogatory statements about Assumption Grotto, has denied that homosexuality is linked to the priest abuse crisis, in spite of evidence showing a near-100% correlation between the rise in self-identified gay clergy and the rise in sex abuse, and in spite of the John Jay report's own statistics showing that 80% of all clerical sex abuse is homosexual in nature.

During a call-in radio show in August on WJR talk radio in Detroit, when Bugarin was a guest, two callers asked specifically whether gay clergy are a problem in the Church.

Jane, a caller from Toledo, Ohio, asked, "Some of the bishops have stated that there's a network of homosexual priests and bishops and they've stated that we really need to work on that issue. Are you guys acknowledging that in Detroit?"

Bugarin evaded the question, saying, "This isn't a gay problem, a straight problem; this isn't a left problem, a right problem. This is about not living the Gospel and I think that's where we have to keep our hearts."

How can you claim that there's not a homosexual clerical problem in the Church when the John Jay Report released earlier notes that over 80 percent of abuse cases were homosexual and ... 75 percent of cases in the Pennsylvania grand jury report were homosexual? ... What is the archdiocese of Detroit doing to stop homosexual abuse by priests on seminarians and other adults?

Bugarin forbade priests from asking any questions about homosexuality in a meeting with Abp. Allen Vigneron.

Church Militant has learned that Bugarin forbade priests from asking any questions about homosexuality in a meeting with Abp. Allen Vigneron in 2018, set up specifically for priests to discuss the sex abuse crisis in the Church.

A fundraising page has been set up to help Fr. Perrone in his canonical and legal defense. 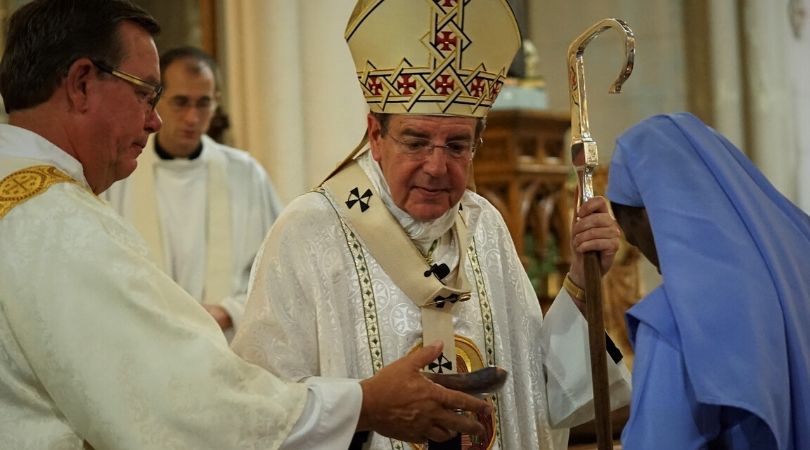 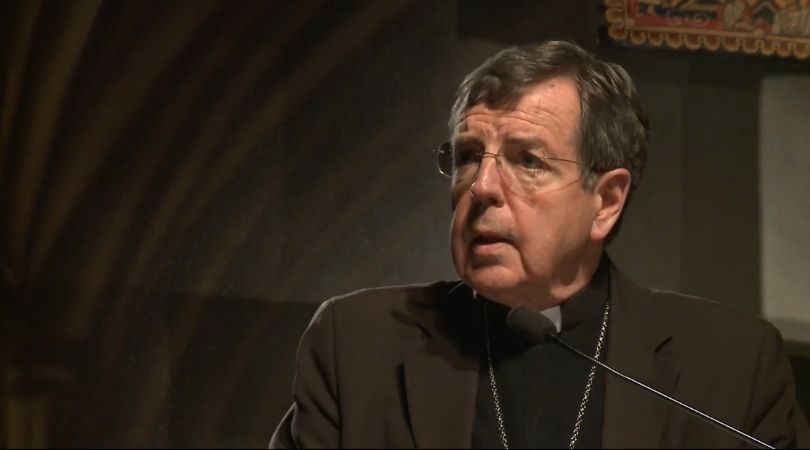