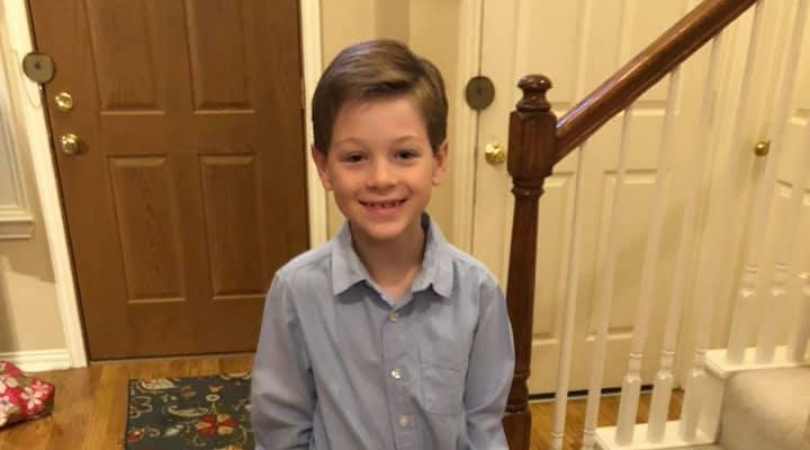 James Younger decides to go to school as a boy

DALLAS (ChurchMilitant.com) - A seven-year-old boy whose mother taught him he is a girl has decided to identify in public as a boy.

On Oct. 21, a Texas court ruled against Jeffrey Younger when he refused to cooperate in the plans of his ex-wife, pediatrician Anne Georgulas, to have their son James go through transgender transitioning. The jury voted 11–1 to give Georgulas sole custody, which would allow for her to make James receive transgender hormone therapy, including chemical castration.

This is James' first time going to school dressed as his biological sex.

Two days later — and after the TX attorney general launched an investigation into the controversial case — Judge Kim Cooks granted the parents joint custody and ruled that both parents' consent is required for any medical procedures — including transgender hormone therapy. Cooks also determined that James must be allowed to pick his gender for himself, and slapped a gag order on both parents effective until James turns 18.

Now, James has decided to identify as a boy at school. He has also opted for his given name, James, instead of the feminine name his mother decided on, "Luna." His mother had enrolled him in kindergarten as a girl and sent him to school dressed in female clothing. This is James' first time going to school dressed as his biological sex.

On Monday, the Facebook page "Save James" shared photos of James alongside his twin brother Jude, announcing, "Going to school. This is what it looks like when James gets to choose! Affirm this!"

James' mother, Georgulas, has been convinced that her son was transgender for years, starting when he was three years old.

In Texas, there is no law prohibiting legal guardians from giving puberty blockers and transgender hormone treatment to minors.

As media attention grew around James' case in late October, it came to light that Georgulas is not James' and Jude's biological mother. The twin boys were conceived by in vitro fertilization using donated eggs, the mother revealed in court.

This is what it looks like when James gets to choose! Affirm this!

Georgulas claims that James willingly identified as transgender. But the father claims she pressured their son to identify as a girl, call himself "Luna" and wear dresses.

In a video interview in May, the father commented on the custody battle, saying, "She's asking a court to jail me if I do not pay for the psychological abuse and sexual mutilation of my son."

Jeffrey has brought out home video footage of three-year-old James saying, "She tells me I'm a girl."

When the jury voted last month to give Georgulas sole custody, there was nationwide outrage.

Amid the outcry, Texas Republican governor Greg Abbott announced that state officials were investigating the case: "The matter of 7-year-old James Younger is being looked into by the Texas Attorney General's Office and the Texas Department of Family and Protective Services."

Even after the judge granted joint custody, some considered this a muted victory for the father.

Jennifer Roback Morse, head of the pro-family Ruth Institute, commented on the custody battle in late October: "The case is not just about transgenderism. It is also about divorce."

She said it was also about third-party reproduction, noting that James and his brother Jude were conceived through in vitro fertilization.

"People who are determined to have a child at all costs sometimes develop serious control issues," Morse said. "The child becomes a project of one parent or the other."

Morse added, "That appears to be the case here, with the mother so controlling that she wants to force her son to live as her 'daughter.'"