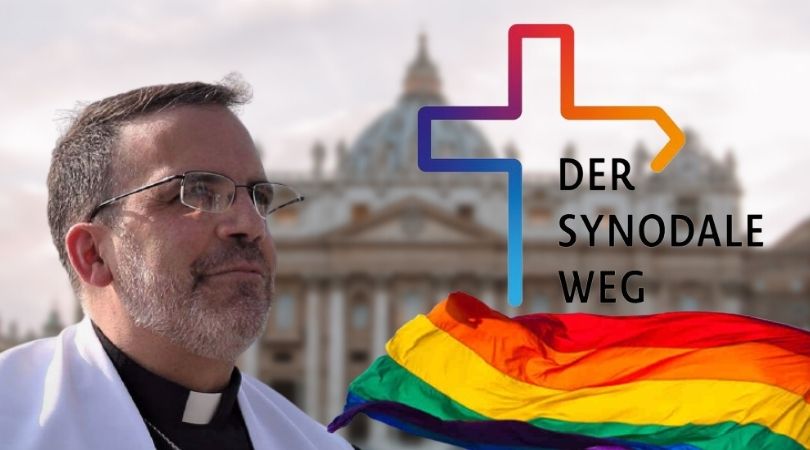 A bishop's vision for Catholicism

Bishop John Stowe of the diocese of Lexington revealed in an interview Monday he believes the Church should be more political. Stowe exhorted his fellow bishops to listen more and dialogue with politicians who support immoral policies.

"I have always believed that the Church must be political ... [W]e do a disservice to our membership if we call for an apolitical Church,"  he claimed.

Bishop Stowe began his interview by addressing the United States Conference of Catholic Bishops (USCCB) and its upcoming meeting in Baltimore.

"My hopes for the USCCB meeting are probably unrealistic," noted Stowe, "but I would love to see us as a conference modeling the Synodal Path that the Church has embarked upon."

The Church in Germany launched the Synodal Path, or Der Synodale Weg, in 2019 as a movement to introduce progressive ideology into the Church. The Synodal Way pushes female ordination, interfaith Communion and blessings for homosexual unions.

The USCCB's meeting begins next week. Many expect the prelates to issue a document on "eucharistic coherence" that could touch on the issue of pro-abortion politicians receiving Communion. Stowe continued, calling for "real discernment, serious discussion and prayerful listening before publishing a letter as important as a teaching document on the Eucharist."

Stowe explained, "It is a complex issue for a responsible Catholic officeholder who recognizes the law of the land and must survive within the dynamics of a political party." He portrayed politicians empathetically as "believing what the Church teaches, but unclear as to how that should relate to the law."

He restated "the Eucharist should not be weaponized in a political battle," an argument used by many prelates reluctant to withhold Our Lord's Body and Blood from public officials who support infant-killing. Stowe suggested bishops sustain an ongoing dialogue with politicians "before presuming their reasons for supporting policies that are objectively immoral."

The Lexington bishop, however, defended his past criticism of President Donald Trump.

"When as a candidate or in office he was brashly demonstrating his disregard for the truth," he said, citing a laundry list of grievances. He blasted Trump for speaking of immigrants in "dehumanizing language," disregarding the equal dignity of women, undoing environmental "progress" and acting antithetically to Church teaching about "the dignity of the human person and the sanctity of human life."

In January 2020, Trump became the first U.S. president to attend the March for Life — a move many critics noted would cost him progressive support. Trump spoke in no unclear terms:

All of us here understand an eternal truth: Every child is a precious and sacred gift from God. Together, we must protect, cherish and defend the dignity and the sanctity of every human life. When we see the image of a baby in the womb, we glimpse the majesty of God's creation. When we hold a newborn in our arms, we know the endless love that each child brings to a family. When we watch a child grow, we see the splendor that radiates from each human soul.

Kentucky, where Stowe's diocese is located, overwhelmingly voted for Trump in the last two presidential elections.

I don't know that I will ever understand those who think that they can follow the teachings of Jesus and idolize Donald Trump.

"I don't know that I will ever understand those who think that they can follow the teachings of Jesus and idolize Donald Trump," lamented Stowe, "It is a fundamental contradiction."

In 2019, Bp. Stowe berated high schoolers at the March for Life who were demonized by the media over an encounter with Native American activist Nathan Phillips.

Stowe said of Nick Sandmann and the other pro-life students from Covington Catholic High School, "I am ashamed that the actions of Kentucky Catholic high school students have become a contradiction of the very reverence for human life that the march is supposed to manifest."

Sandmann and the others were from the diocese of Covington, Kentucky — which neighbors Stowe's diocese of Lexington.

In Monday's interview, Stowe continued to talk politics, "I don't see it as a question of red or blue, but a question of whether or not we take Jesus seriously." The bishop asked: "How can you follow Jesus and be unrepentant about systemic racism ... ?"

"I'm unapologetic about promoting social justice because that was and is the mission of Jesus," asserted the bishop.

Stowe has openly supported the so-called LGBTQ community in the past, even offering a blessing for homosexual and gender-confused couples. In August, Stowe gave a speech titled, "Why Black Lives Matter: A Catholic Perspective on Racism."

I'm unapologetic about promoting social justice because that was and is the mission of Jesus.

The Black Lives Matter movement is a Marxist ideology that perpetuates racial inequality by dividing people by skin color into opposed groups — oppressors versus the oppressed — promotes abortion and sexual deviancy and advocates for dissolution of the family.

"I sure wish I knew how to convince more white Catholics to be interested in dismantling racism and recognizing its presence in the Church and world," Stowe offered.