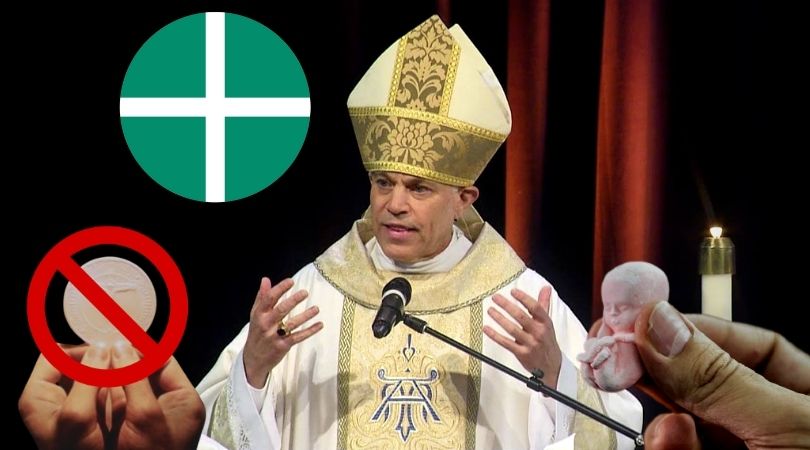 SAN FRANCISCO (ChurchMilitant.com) - Bishops are taking sides in a fight over abortion and Holy Communion.

An unofficial coalition of pro-life U.S. bishops is apparently forming to fight against unworthy pro-abortion Catholic politicians who sacrilegiously receive the Holy Eucharist.

San Francisco's Abp. Salvatore Cordileone took to the press this week, suggesting to reporters that pro-death politicians like Nancy Pelosi, Joe Biden and other Catholics in public life should not receive the Blessed Sacrament.

When asked in an interview posted Tuesday if it would be up to him to bar Pelosi from Holy Communion, Cordileone appealed to official Catholic Church teaching: "This would be the application of canon 915, so that's in canon law. If someone who's persisting in obstinate grave sin is not to receive Communion or not to be admitted to Communion."

Church Militant contacted Nancy Pelosi's press office for comment five times, asking about her communications with Abp. Cordileone. Over the phone, staff pledged to try and get an answer. But there was no response or comment from them.

In a separate interview that same day with the Daily Caller, the archbishop was asked if high-profile Catholics can support abortion.

"Absolutely not," Cordileone exclaimed. "It really grieves me that this question needs to be asked. It's understandable that it's being asked. But it should be known by everyone."

Abp. Cordileone explains how confusion has evolved on worthy reception of the Eucharist

The archbishop also called on pastors to start teaching this from the pulpit — noting that allowing these figures to receive Communion is partially the reason both "scandal" and "confusion" on the issue exists.

"The Church's pastors have a responsibility to teach, not just using words and making statements, but being very forthright in guiding our people and helping them to form their consciences."

Allowing these figures to receive Communion is partially the reason both 'scandal' and 'confusion' on the issue exists.

The public appearances follow the May 1 release of Cordileone's 17-page pastoral letter titled, "Before I Formed You in The Womb I Knew You." The archbishop's proclamation strongly defends the Church's teaching on life and reception of Holy Communion.

Cordileone concluded his instruction with a plea to Catholics in public life to step up.

In response, a couple of prelates have lauded the letter.

Wisconsin's Bp. Donald J. Hying of the Madison diocese plugged it on the local Catholic news site, calling on Catholics to "pray for those leaders who pursue government policies and laws which seek to further entrench abortion rights and other assaults on innocent human life."

In an official statement on May 4, Bp. Robert F. Vasa of the Santa Rosa diocese also recommended his diocesan faithful read it, prayerfully asking for the conversion of pro-abortion Catholic politicians.

"I commend the archbishop for offering encouragement to Catholics in public life who advocate for life. I join him in asking that those who participate in or support this grotesque industry to actually look at the evil that is being done and open their hearts to God['s] converting grace," Vasa said in agreement.

Other bishops were adversarial, like Bp. Robert McElroy of San Diego, who claims this muscular pro-life approach "weaponizes" the Blessed Sacrament.

Either way, the United States Conference of Catholic Bishops (USCCB) is planning to hold its annual spring general assembly June 16–18. As its meeting draws near, there are rumblings in Catholic and secular circles nationwide about the possibility of an official document on the issue.

If this coalition of bishops continues coalescing its authority to place the right to life and eucharistic reverence at the forefront, then the controversial Holy Communion document may be brought up, and may also be seriously considered by the USCCB.