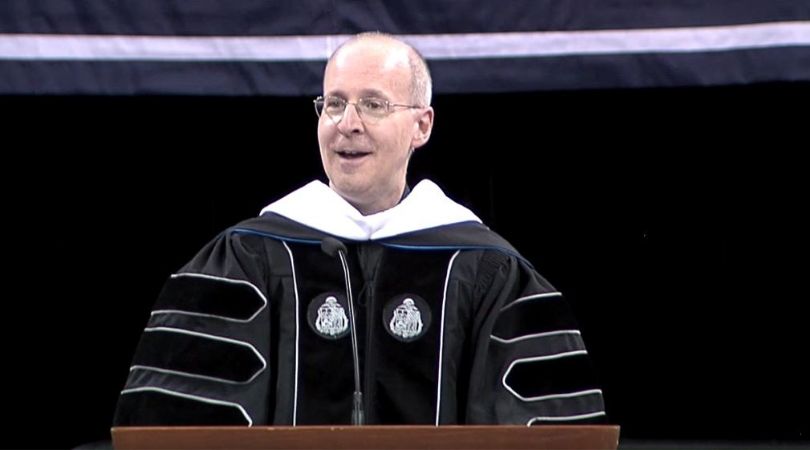 This past weekend, a friend forwarded me Fr. Martin's recent diatribe in which he went off on LifeSiteNews and Church Militant.

Father Martin makes a lot of hay from "demonizing" absolutely everyone who disagrees with his cause of making the world "gay-friendly!" God forbid anyone challenges Fr. Martin in the promotion of his cause célèbre. Eight months ago, I was one of these "demons" Fr. Martin took on, and he did so without making any contact with me whatsoever and without even checking out any of the actions for which he hung me out to dry.

By the by, Fr. Martin, the banner over which prayers of deliverance were said and which was destroyed was not a generic Walmart gay flag. The banner that was burned by Resurrection parishioners was one of the last bits of Fr. Montalbano's gay paraphernalia which he used as a piece of not-so-subtle propaganda to proclaim his lifestyle rather than to proclaim the Gospel and the teachings of the Catholic Church.

Dear friends at @Church_Militant @LifeSite and Tradition Family and Property, who write articles, start online petitions and organize protests whenever I speak. Let me save you some time and effort. Because, lately, here's what usually happens when you do this. (Thread.)

There was a lot of paraphernalia, and it cost a lot of money. To quote one of the parishioners who participated in the destruction of this last bit of Fr. Montalbano's paraphernalia this past Sept. 14, the solemnity of the Exaltation of the Holy Cross, "Fr. Montalbano may not have raped young boys, but he certainly raped this parish financially."

Resurrection parish has a beautiful bell tower, but it is sadly empty. Thanks to Fr. Montalbano, it no longer has the 32 bell carillon for which it was built. The parish's Deagan chimes now are housed in a tower on the Sanfilippo (Fisher Nut Company) Estate in the suburbs, and who knows what Fr. Montalbano did with the money from their sale?

But, back to the topic at hand, Fr. Martin, which is your diatribe of this past Sunday against the few remaining independent Catholic news sources. You make repeated references in this diatribe about how a person's sexual orientation is somehow a major part of what constitutes and makes up a human being. I beg to differ!

A person's sexual orientation is not a major part of who a man or a woman is, made in the image and likeness Almighty God. In fact, being male and female is just the result of how the parent's genes combine to make a new human being with his or her distinct DNA, and I have yet to read about a gene that determines one's sexual orientation.

A lot of people tell me I have eyes of an unusually beautiful blue color. My eyes and their rare blue color are no importance to who I am as a man, made in God's image and likeness.

13) But except for that one angry person, they are people who are grateful that someone is talking about LGBT Catholics in a positive way, or they are parents of LGBT children who have felt excluded from their church, or they are LGBT Catholics themselves who hug me and thank me.

What is of importance to me as a man, made in His image, is how rational I am and how I welcome God the Holy Spirit to guide my mind. Father Martin, in a profoundly disturbing and demonic way you use an "off" human anthropology to promote sin — nowhere in Sacred Scripture, and nowhere in the writings of the Church Fathers, do you find any justification for your skewed human anthropology that raises a person's sexual orientation to a cause célèbre.

How do I know what I write is true and what you promote is just dead wrong? It is from my experience as the victim of "homosexual" sexual abuse, not once, but twice in my young life — once as a child and then as a young seminarian!

Let me explain. Often, one of the casualties of being sexually abused is that the abuse makes the abused turned off to all sex, and of all things sexual. For myself, after I was raped by Fr. Cozzi, I went a six-year period without even having a sexual thought whatsoever! No thoughts of intimacy, no thoughts of even touching another person. In fact, to this day, I remain tactilely defensive; when someone attempts to hug me, I offer a fist bump.

Not wanting to bring back the absolute horror of being attacked, I now orient myself to no sex. It is my experiences that have shaped me; it is not how I was born. Long story short, after therapy and time, 36 years now has elapsed.

I found your personal attack on me unsettling, but your attempt at supplanting the true faith with a funhouse mirror version of it makes me sick.

I am able to function, but I am a changed man for good or for bad. But, sex, and having it, or orientation for that matter, is not really anything in my life. And I find your promotion of everything gay and your "sexualization" of what constitutes a human person made in God's image and likeness absolutely repulsive.

But, back to the point of this message, eight months late on my part. Your hyped promotion of everything gay is, simply put, demonic. The "sexualization" of the human person is nothing more than a new "enlightened" version of idolatry.

Just like Arron and crew at the foot of Mount Sinai, fallen human beings are easily misled into one form of idolatry or another! And what you have in the hyped celebration of a person's orientation is simply a new form of idolatry.

So today I make a challenge to you, Fr. Martin, along the lines of Elijah on Mount Carmel. How is it that your new anthropology is better than that given to us by the Fathers of the Church? Why should we brush aside absolutely all of Sacred Scripture to make room for this "new" understanding of how a person is made?

I for one do not believe what you are saying, which boils down to rewriting Genesis to say, "God made them, male and female he made them, some heterosexual and some homosexual he made them, in the divine image he made them."

I found your personal attack on me unsettling, but your attempt at supplanting the true faith with a funhouse mirror version of it makes me sick. And by the by, before you "demonize" me, or LifeSiteNews or Church Militant, check out your facts. Come judgment day, there will no longer be a leftist press corps to sing your praises.

Father Paul John, in hiding from the homosexuals who hate me.