A Saint for Our Times 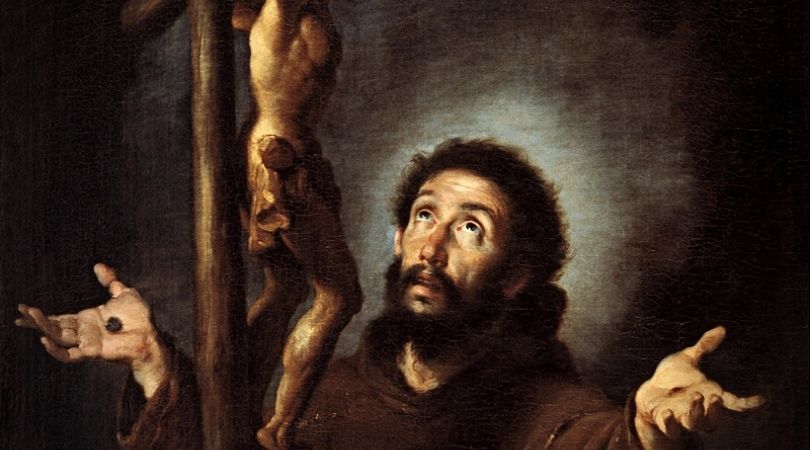 St. Francis of Assisi, pray for us!

Saint Francis of Assisi was born on Sept. 26, 1181, on the feast of the twin martyrs of the early Church, SS. Cosmas and Damian. Saint Francis, born 840 years ago this year, has always been one of my favorite saints — in large part because we share the same birthdate.

When he was baptized, St. Francis was given the name "John" after St. John the Baptist. But, in time, he would receive the nickname "Francesco" (Francis) by his dad — then an homage to the French. It was a shout-out by Francis' dad to his mother, who was French. After Francis' death, the name Francis came to be a staple for boys throughout the Catholic world (and, even now, most large Catholic families have at least one Francis in their lot).

Saint Francis is, perhaps, the world's most beloved saint. He's known for the canticle he wrote praising God for creation, for founding the Church's largest religious community of men and for being a stigmatic, bearing on his person the wounds of our Lord's Passion.

In modern secular times, St. Francis is perhaps best known for talking to animals and for being an advocate of pets. Many Churches, on St. Francis' feast day, Oct. 4, offer pet blessings as sort of a tribute to the well-loved saint. And many Catholics, if they have any statuary in their garden, will at a minimum have one of the Blessed Mother and one of St. Francis. Saint Francis garden statuary characteristically depicts him holding a dove or two. Many even incorporate birdbaths or even bird feeders.

Sadly, these secular garden depictions of St. Francis fall so short of the mark, failing to portray the strong "man's man" that St. Francis was — as if St. Francis, in the course of his day-to-day life, spent his time talking to birds instead of rebuilding the Church, which he had found in ruins when he was a young man!

Saint Francis, early in his adult life, while in prayer in an abandoned ruin of a chapel outside of Assisi, heard the voice of Our Lord telling him, "Rebuild My Church."

Undaunted by the seemingly herculean task, Francis began rebuilding a number of chapels in his area, one stone at a time, one day at a time, unfazed by naysayers and by the conventional wisdom of his day.

During the first days of his life as a religious in vows, Francis learned that what God desired of him most on a given day was that he be obedient to the most holy will of the Divine. Other concerns were secondary. What was most important on a given day was to fulfill the task at hand, to do what God wanted of him and not sweat other worries! God would provide for Francis' needs and for the needs of his companions, as God provided fully for the "lilies of the field" (Matthew 6:28).

Saint of the Day: St. Francis of Assisi

In those first years after Francis responded to God's call to rebuild His Church, a couple of companions joined him in this project. Francis came to understand that Our Lord wanted him and his companions to walk in His footsteps. Jesus said, "Don't take any money for the journey" (Luke 9:3). Francis understood that this meant he and his companions were to take no money for their travels either but to subsist on what people shared with them. Jesus said, "Don't take along for the road a second tunic." Francis and his companions took this literally and would soon be known for having only one rough, simple woolen robe to wear!

In time, Francis and his group of stalwart companions would be known for tying their robes together at the waist with a simple rope with three knots. One knot was for their promise of poverty, walking in the footsteps of Christ as men who owned nothing. One knot was for obedience to God, as Christ was obedient to God the Father and suffered His passion and death to redeem humanity. And one knot was for their promise of chastity, putting aside all sexual intimacy and marriage as Our Lord did during His time on earth.

Francis came to understand that Our Lord wanted him and his companions to walk in His footsteps.

These three promises or vows that Francis and his companions kept are referred to in the Church as the evangelical counsels. They are called evangelical because they are based on Our Lord and His teachings found in the Gospels. And they are referred to as counsels as Our Lord, in the course of His teaching, counseled His disciples to keep these promises. "If you would be perfect, go, sell what you possess and give to the poor, and you will have treasure in Heaven; and come, follow Me" (Matthew 19:21).

Francis — no namby-pamby sort of a guy — became renowned during his lifetime for following God's directive in all things. He even attempted to convert a Muslim sultan in Egypt: not the actions of a weak man or cowardly man by any stretch of the imagination!

In 1219, St. Francis and a companion went to Egypt, hoping to appear before the sultan and convert him to the Christian faith.

Thomas of Celano, an early companion of St. Francis, describes the encounter with the sultan as follows:

Taking a companion with him, he was not afraid to present himself to the sight of the sultan of the Saracens.

Who is equal to the task of telling this story?
What great firmness he showed standing in front of him!
With great strength of soul he spoke to him,
With eloquence and confidence
He answered those who insulted the Christian law.

Before he reached the sultan, he was captured by soldiers, insulted and beaten, but was not afraid. He did not flinch at threats of torture nor was he shaken by death threats. Although he was ill-treated by many with a hostile spirit and a harsh attitude, he was received very graciously by the sultan. The sultan honored him as much as he could, offering him many gifts, trying to turn his mind to worldly riches. But when he saw that he resolutely scorned all these things like dung, the sultan was overflowing with admiration and recognized him as a man unlike any other. He was moved by his words and listened to him very willingly.

In all this, however,
The Lord did not fulfill his desire
Reserving for him the prerogative of a unique grace. [An allusion to St. Francis later receiving the stigmata.]

Lamentably, despite Francis' best efforts, the sultan would not then convert, and a sad Francis returned to Assisi.

Saint Francis was known to have the stigmata or the wounds of Christ. This grace Francis bore on his person for over two years, from Sept. 13, 1224 until his death on Oct. 3, 1226.  He passed to eternal life at the age of 45.

The stigmata are a visible, physical manifestation of Christ's wounds. The recipient of the stigmata — in this case, St. Francis — feels in some measure the pain of the wounds of Our Lord's Passion. Saint Francis' companions attest that he felt those pains when he had the stigmata.

The stigmata are a visible, physical manifestation of Christ's wounds.

One morning, near the feast of the Exaltation of the Cross, a six-winged angel allegedly appeared to Francis while he prayed. As the angel approached, Francis could see that the angel was crucified. He was humbled by the sight, and his heart was filled with elation joined by pain and suffering.

And again we look to Thomas of Celano for more:

His hands and feet seemed to be pierced by nails, with the heads of the nails appearing in the palms of his hands and on the upper sides of his feet, the points appearing on the other side. The marks were round on the palm of each hand but elongated on the other side, and small pieces of flesh jutting out from the rest took on the appearance of the nail-ends, bent and driven back. In the same way the marks of nails were impressed on his feet and projected beyond the rest of the flesh. Moreover, his right side had a large wound as if it had been pierced with a spear, and it often bled so that his tunic and trousers were soaked with his sacred blood.

Saint Francis of Assisi was no weak, cowardly man by any stretch of the imagination. He was a man commissioned by Our Lord Himself to rebuild the Church. Put aside those images in your mind of garden statues of Francis speaking to the birds and holding up birdbaths! Francis was a man's man, one who dared to venture to convert a sultan and who was graced the last two years of his life with the very painful wounds of Our Savior. Francis was far from the garden variety of a Catholic saint; banish that from your mind. 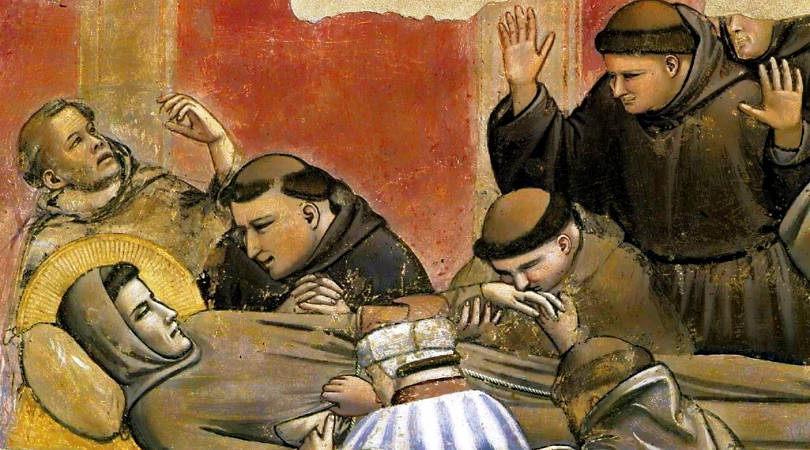