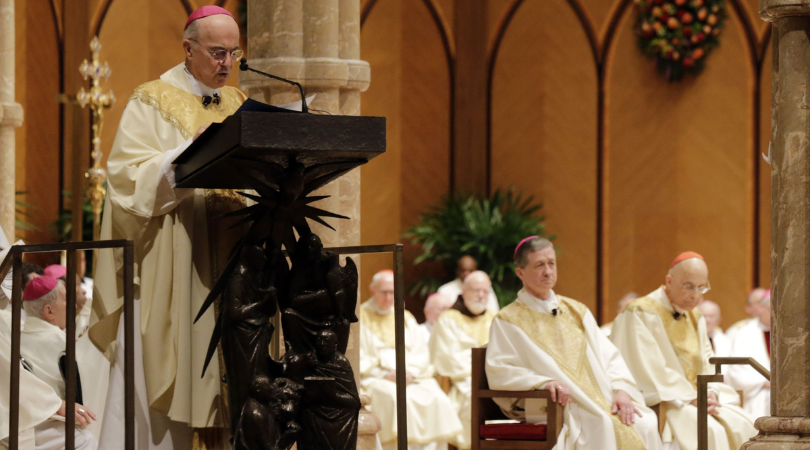 Viganò: 'What we are now seeing is the triumph of a 60-year-old plan'

Since drafting his first bombshell testimony one year ago today, Abp. Carlo Maria Viganò has continued to keep the Catholic Church in cleaning mode with his timely interventions.

In his testimony dated Aug. 22, 2018, the Feast of the Queenship of Mary, and released three days later, Viganò testified to the existence of a homosexual network which is strangling the Church and must be "eradicated."

"These homosexual networks," wrote Viganò, "which are now widespread in many dioceses, seminaries, religious orders, etc., act under the concealment of secrecy and lies with the power of octopus tentacles, and strangle innocent victims and priestly vocations, and are strangling the entire Church."

His testimony came out two months after the archdiocese of New York announced on June 20 that its review board found the allegations of sexual abuse against then-Cdl. Theodore McCarrick to be "credible and substantiated." Many Catholics began asking which prelates had turned a blind eye to McCarrick's history of abuse.

In his initial testimony, Viganò shook Catholics with the news that he himself had personally informed Pope Francis of McCarrick's nefarious history only to have the Pope brush it off.

"Holy Father, I don't know if you know Cardinal McCarrick, but if you ask the Congregation for Bishops there is a dossier this thick about him," responded Viganò. "He corrupted generations of seminarians and priests and Pope Benedict ordered him to withdraw to a life of prayer and penance."

Viganò's claim of sanctions against McCarrick was corroborated most recently in May by the publication of a series of letters by McCarrick's former personal secretary, Msgr. Anthony J. Figueiredo. The monsignor said he made this correspondence public only after trying unsuccessfully to share it with the Holy See. In the past year, Viganò's various dire claims have been vindicated in many ways as the following list shows:

Viganò's next testimony was written on Sept. 29, 2018. He defends his choice of breaking what's called a "pontifical secret" by citing paragraph 2491 of the Catechism of the Catholic Church.

"[The] seal of secrecy is not binding when very grave harm can be avoided only by divulging the truth," writes Viganò. "Only the seal of confession could have justified my silence."

This second testimony came out after Pope Francis told reporters on his way back from Dublin in August that with regards to Viganò's testimony he would "not say a single word."

Analyzing this in his September testimony, Viganò remarked, "If he had said: 'Viganò lied,' he would have challenged my credibility while trying to affirm his own. In so doing he would have intensified the demand of the people of God and the world for the documentation needed to determine who has told the truth."

Fast-forwarding to May, Francis told a Mexican journalist that he "several times" stated he "did not know anything" about McCarrick's objectionable past and claimed he didn't "remember if he [Viganò] told him about it.

Of McCarrick I did not know anything, obviously, nothing, nothing. I said that several times, that I did not know, no idea. And when this person [Viganò] says he spoke to me that day, he came. ... And I do not remember if he told me about this, if it is true or not. No idea!

The archbishop further dissected the Pope's same denial on June 10 during an 8,000-word interview with The Washington Post.

"All these three are blatant lies," affirmed Viganò.

The Pope proclaimed last year that he would "not say a word about my testimony," recalled Viganò. "Now he claims 'he has already replied many times' to my testimony," added the archbishop.

"So, either he spoke or he kept silent," remarked Viganò, "Which is it?"

Viganò further questioned how any supreme pontiff could forget when a nuncio tells him that a cardinal has corrupted generations of priests and seminarians.
What we are now seeing is the triumph of a 60-year-old plan.
A section of Viganò's interview with The Washington Post that was edited out indicted Francis for his role in covering up sex abuse in the Vatican. Pope Francis is aware of young seminarians who were victimized at the Vatican's St. Pius X Pre-Seminary by another seminarian who went on to be ordained a priest, said Viganò.

"The pope and many prelates in the Curia are well aware of these allegations, but in neither case was an open and thorough investigation permitted," he remarked.

In his most recent intervention in July, Viganò commented on the Amazon Synod.
"It is against everything I have worked for and believed for all my life," warned the archbishop.
He then spoke of the communist influence of liberation theology behind the synod and that had influenced the Jesuits of South America for decades:

What we are now seeing is the triumph of a 60-year-old plan, the successful execution of a well-thought out plan to bring a new sort of thinking into the heart of the Church, a thinking rooted in elements of Liberation Theology containing strands of Marxism, little interested in traditional Catholic liturgy or morality or theology, but rather focused on "praxis" in the field of social justice. And now this plan has achieved one of its supreme goals, with a Jesuit on the See of Peter.

Viganò: Between the Lines of the McCarrick Report
By Church Militant   •   0
Pressure in the Pulpit
By Aidan O'Connor   •   0