Bishop Baker: Where Is Christ’s Name? 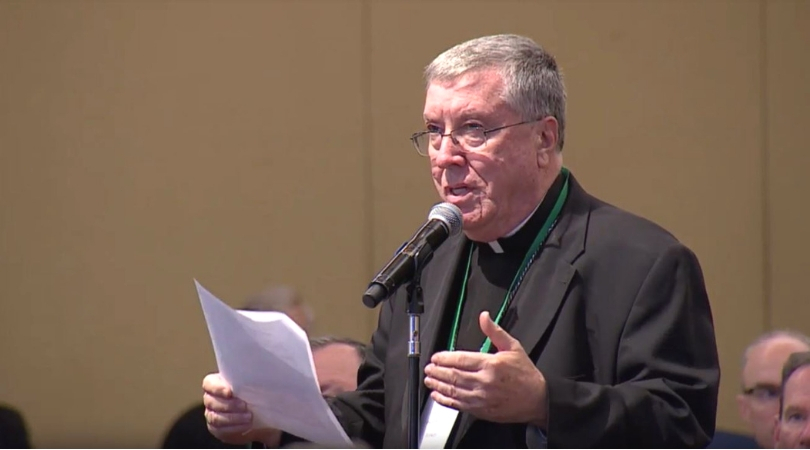 BALTIMORE (ChurchMilitant.com) - During the U.S. bishops' ongoing meeting in Baltimore, one bishop pointed out that Christ's name did not show up in the documents and discussion.

During the General Assembly of the U.S. Conference of Catholic Bishops (USCCB), much of the discussion revolves around policies and procedures. Wednesday afternoon, USCCB President Cdl. Daniel DiNardo yielded the floor to Abp. Allen Vigneron of the Detroit archdiocese to present on the proposed "strategic priorities" and "emphasis areas" for "the 2012–2024 strategic planning cycle."

While addressing that bullet-point on the floor, Bp. Robert Baker of the Birmingham diocese pointed out that the name of Christ was nowhere to be found in the bullet points and discussion.

"I notice the name 'Jesus Christ' hasn't been mentioned in the course of this," Bp. Baker said, "and Pope Francis has always mentioned that 'missionary discipleship' is an encounter with Christ that leads to all this. It might not hurt to throw that [i.e. Christ's name] in there somewhere."

Bishop Baker was alluding to an earlier part of Vigneron's presentation, which used the phrase "joyful band of missionary disciples." This phrase was apparently taken wholesale from the "Unleash the Gospel" campaign that Abp. Vigneron has overseen in his own archdiocese of Detroit.

The Birmingham bishop proposed rewording the bullet point about chastity to add Christ's name, saying, "Perhaps, 'Cultivate an ever-deepening spirituality of chastity and virtue as a result of a personal encounter with Christ,' or something. Hopefully, somewhere His name could be mentioned. Thank you."

Archbishop Vigneron did not respond to the mention of including Our Lord's name. He addressed a more technical point, saying, "Just to get back to the genre that we're dealing with, one of the advantages of having this as an emphasis area is it doesn't just become the work of one committee, but we hold ourselves to the agenda of cross-committee collaboration on all of these areas."

A few moments prior to his remarks on Christ's name, Bp. Baker had referenced a statement on chastity from the National Advisory Council (NAC) — referring to it as "the Nac." It appears Abp. Vigneron was responding to this comment.

I notice the name 'Jesus Christ' hasn't been mentioned in the course of this.

Catholic priest John Stone tweeted about Bp. Baker's call for including Christ's name Wednesday, saying, "This man, Bp. Baker, just stood up and said, 'You know, I haven't heard the name of Jesus Christ mentioned in any of this ... maybe we can add His name in somewhere.'"

And therein lies the crux of the problem and why all their action items are doomed to failure. It's obvious most bishops in the West no longer believe.

One Twitter user replied, "And therein lies the crux of the problem and why all their action items are doomed to failure. It's obvious most bishops in the West no longer believe."

Another account commented, "They run the Church as if it is a corporation, with different resolutions, motions, etc. Run it on your knees praying!"

Wednesday's General Assembly proceedings were rife with discussion of "resolutions, motions" and other bureaucratic-sounding language.

For instance, when Abp. Vigneron began his presentation, attendees and viewers of the live stream listened to lengthy bureaucratic sayings like the following:

And so, these are not the committee recommendations about what the priorities for our conference should be; but rather, these are our formulations of the material we heard from you — from what we heard from the body of bishops, and from what we heard from the National Advisory Council — through the consultations. We have made an effort to see the shapes that are formulated, and to formulate — and to articulate — these, in a way that is sufficiently broad that it will encourage collaboration across all of our committees and offices — whether that's a formal or an informal collaboration. And of course, to say, that these priorities take as a presumption the, uh, the, uh, mandates that are already included in our bylaws.

This represents only about two minutes out of a 90-minute session on Wednesday. 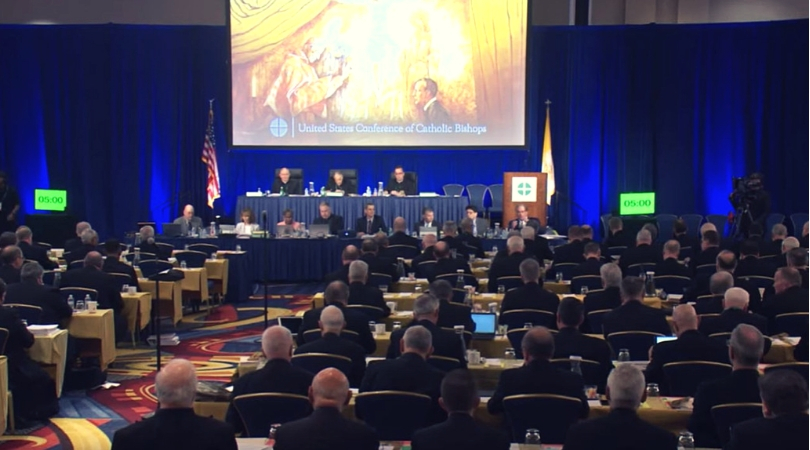