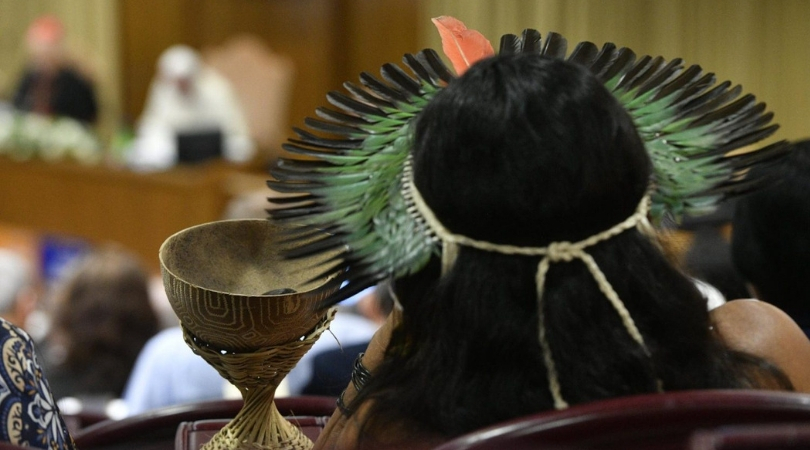 Women deacons given a mention, but require further study

VATICAN (ChurchMilitant.com) - The Amazon Synod's final document includes the proposal to make exceptions for married clergy in the Amazon, while the idea of women deacons requires further study.

The document, which includes 120 paragraphs, was presented to the synod fathers Saturday by Relator General Cdl. Claudio Hummes, with each paragraph voted on individually. Only those paragraphs that received a supermajority are included in the final document, which now goes to Pope Francis for consideration. A synodal exhortation based on the final document will be written and published by the pontiff, who hopes to complete it "before the end of the year."

As Vaticanista Sandro Magister notes, "[T]his document has no normative effect whatsoever." Cardinal Raymond Burke, who spoke at Detroit's Call to Holiness Conference Saturday, confirmed that a synod "has nothing to do with changing doctrine."

Several key paragraphs from the synod document are worth highlighting.

It notes that celibacy "is not required by the very nature of the priesthood," going on to praise "legitimate diversity" in the Church and proposing "to establish criteria and dispositions on the part of the competent authority ... to ordain suitable and esteemed men of the community to be priests ... in the most remote areas of the Amazon region."

"In a large number of these consultations, the permanent diaconate for women was requested," according to the document. Referring to Pope Francis' 2016 "Study Commission on the Diaconate of Women," synod fathers "would therefore like to share our experiences and reflections with the Commission and await its results."

Paragraph 119, which received 140 in favor (88%) and 19 against (12%), proposed "an Amazonian rite, which expresses the liturgical, theological, disciplinary and spiritual heritage of the Amazon."

"This would add to the rites already present in the Church, enriching the work of evangelization, the ability to express faith in one's own culture and the sense of decentralization and collegiality that can be expressed by the Catholicity of the Church," it continues. "It could also study and propose how to enrich ecclesial rites with the way in which these peoples take care of their territory and relate to their waters."

We propose to define ecological sin as an action or omission against God, against others, the community and the environment.It is a sin against future generations and manifests itself in acts and habits of pollution and destruction of the harmony of the environment, transgressions against the principles of interdependence and the breaking of solidarity networks among creatures ... .

Synod fathers expressed support for "special ministries for the care of our 'common home' and the promotion of integral ecology at the parish level and in each ecclesiastical jurisdiction ... ."

In his final remarks in the aula, Pope Francis made special mention of "synodality."

"I do not know if that will be chosen or not, I have not yet decided," he said regarding the topic. "I am reflecting and thinking, but I can certainly say that we have walked a lot and we still have to walk more on this path of synodity."

The synod press briefing failed to clarify, however, exactly what "synodality" entails. Asked by a journalist to give a definition, Cdl. Michael Czerny offered an ambiguous response.

This is pretty funny, at the Press Conference for the Presentation of the Final Document of the #AmazonSynod #SinodoAmazonico, Cardinal Michael @jesuitczerny is asked to explain "synodality". Here is his answer: pic.twitter.com/ONWoZn5jrw

"I think that the dynamic of the Synod is such that everyone had a sense of what it meant because we were doing it," said Czerny. "Whether everyone could explain it in words, I'm not so sure, but I'm not sure that that mattered."

The pontiff also remarked on the role of women, making clear that a woman's role cannot be viewed merely by her "functionality" or "usefulness" in the Church, but that it reaches "far beyond" that.

"But the role of women in the Church goes far beyond functionality," he said. "And that is what you have to keep working on. Far beyond."

The role of women in the Church goes far beyond functionality.

Hummes, who offered final reflections on the Amazon Synod, also touched on this point.

"No, there was no talk of an ordained ministry," he said in an interview Saturday with Vatican News, "but of a ministry instituted for women."

The controversial Pachamama made no appearance at the synod's closing Mass, in spite of remarks made by Pope Francis hinting at the possibility.

In a short address made Friday afternoon to the general congregation, the pontiff apologized to those who had been offended by the "act of theft" of the carved figures, explaining that Italian police had recovered three of the statues — flung into the Tiber Monday morning by two unnamed individuals. He added that he was considering displaying them at Sunday's closing Mass.

The news led numerous Catholics to respond online with outrage at what they viewed as open sacrilege.

The Vatican said it was considering pressing charges against the perpetrators of the "theft," although their identity and whereabouts remain unknown.

A video also showed one pachamama figure being venerated in Santa Maria del Traspontina (where the figures had originally been removed), surrounded by lit candles and dozens of images laid out in a circular pattern.

According to Italian site Messainlatino.it, the footage was shot Saturday afternoon showing Pachamama "enthroned" in the middle of the nave, "venerated with candles and benches arranged around it."

Amazon Synod's Stations of the Cross, which kicked off with a sage-burning ritual
and featured Pachamama carried in a canoe to each station

Pachamama was arguably one of the most controversial aspects of the Amazon Synod, and appeared to be the dividing line between conservative Catholics, who saw her as a pagan Earth Mother goddess whose presence within Rome churches constituted sacrilege, and left-leaning Catholics, who took a more politically correct line and viewed her as a harmless symbol of life and fertility.

Vatican spokesmen were never able to explain exactly what Pachamama was, rejecting the claim that she represents the Virgin Mary, while also denying she represents paganism.

Pope Francis claimed in his Friday remarks that Pachamama was set up in the church "without the intention of idolatry."

The pontiff's hope that he will complete the synodal exhortation before the end of the year has led to increased speculation that the final document had already been written before the synod had even begun.

Bishop Erwin Kräutler — main author of the working document, which was slammed as "apostasy" and "heresy" by dubia cardinals Raymond Burke and Walter Brandmüller — claimed he did not write the final document and that "no one knows" who did. He was also emphatic that Hummes did not author it.

Journalist @EdwardPentin asks Bishop Krautler - lead author of the Amazon Synod working document - whether the push for female deacons in the Amazon masks the agenda to ordain women priests in the Catholic Church.

During questioning after a synod press briefing, Kräutler admitted he wants female priests and exceptions for married clergy.

Kräutler is Brazilian director of REPAM, a South American Catholic network that advocates on behalf of Amazonian peoples, and which played a key role in organizing and influencing the Amazon Synod.

REPAM, whose president is Cdl. Hummes, came under fire after Church Militant reported that it invited a group of leftist communist politicians — including pro-infanticide leader Jandira Feghali — to give a presentation in the Vatican.

REPAM has denied inviting the group, while the communist Brazilian Workers Party stated they "came to Rome at the invitation of the Pan-Amazonian Ecclesial Network (REPAM) to participate in the Synod and present the report document 'Human Rights in the Legal Amazon.'"

Cristiane Murray, member of REPAM and now vice director of the Holy See Press Office, attempted to downplay the communist groups' visit, saying it was a "parallel event" that was not an official part of the Amazon Synod.

While Kräutler and certain other synod fathers did not get their desired goal of ordaining women deacons, the bishop nevertheless expressed satisfaction with the final document.