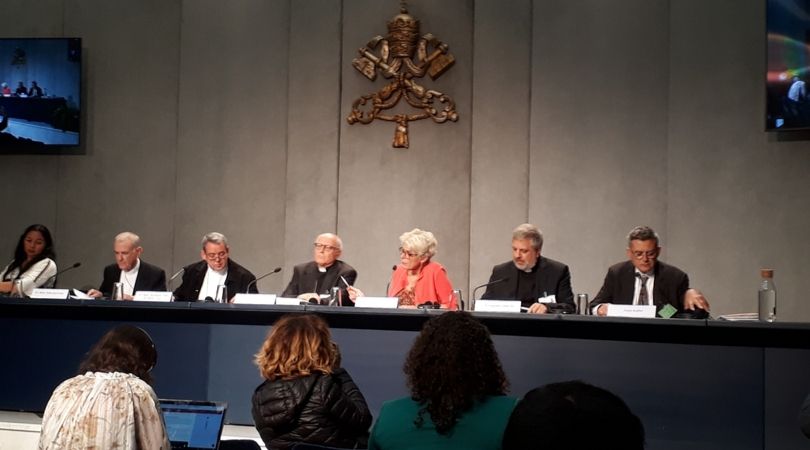 Synod panelists insist on leaving room 'for the Spirit'

VATICAN (ChurchMilitant.com) - The Amazon Synod is calling for a "qualitative leap" in the Church's pastoral and social ministry, which it says will have significance for the whole world and global Church.

The synodal path of discernment cannot be represented by small solutions or small changes, spokesperson Fr. Giacomo Costa, S.J., Direttore di Aggiornamenti Sociali, told the press gathering at the Vatican on Wednesday, as the synod reached its halfway point and participants began discussions in small groups.

This means "leaving behind the safety of our arguments," as did the blind man in the gospels who threw away his coat and rushed to meet Jesus. He also advocated leaving room for the Spirit.

At #SinodoAmazonico #AmazonSynod Presser, +Pedro José Conti, Bishop of Macapá (Brazil); "sometimes we [clerics] pretend to know everything, sometimes we need the skills of lay men and women"; adds "we need laity at the political level, well formed in the doctrine of the Church" pic.twitter.com/EmbMrpyRRU

It is grace and not canon law that will provide the solutions the Church is so desperately seeking, and this is the prophetic direction the Church is traveling, he added.

Asked whether the synod fathers were seriously considering ordaining women to the diaconate, he admitted that this was being discussed, but since the synod has no decision-making power, it would be the left to the Holy Father to decide.

Apparently frustrated by repeated questions on women's ordination, an apparently pagan idol at the Vatican, the problematic direction of inculturation and the recycling of liberation theology, the panel speaking to the media pleaded with Catholics not to focus on individual themes that were divisive but "to allow the Spirit to speak in order to resume an apostolic approach."

"Everything is connected and complex. So let us look at the tree and not the branches," said Paolo Ruffini, prefect of the Dicastery for Communications, stressing that the path was in prophecy not in organizing conflict.

Costa also cautioned against "being trapped in details," as it would fragment the deeper reality the synod was seeking to represent.

Eco-activist Yesica Patiachi Tayori, an indigenous woman from Peru, said she had personally told the Holy Father to intervene since the Amazonian indigenous peoples were being "suffocated by developmental models that come from outside."

"We asked the Pope to help us not to become extinct as a people and that institutions respect our language, culture and traditions,"said Tayori, known as "the Harakbut woman who shook the Pope."

Tayori attacked Western climate change activists for speaking without considering the context of the indigenous peoples.

"Our grandmothers have been warning us for a long time about climate change," she remarked, calling for the protection of the ancestral wisdom of the indigenous peoples.

At #SinodoAmazonico #AmazonSynod Presser, Yesica Patiachi Tayori, of the Harakbut people of Peru, forcefully says: "We don't have a stage to report these crimes against our food safety and environmental safety, ... protection of our ancestral wisdom for life. Where are the UN?" pic.twitter.com/KQ00YWuzEF

The message of "ecological conversion" was repeated at the synod press briefing, and Old Testament scholar Bp. Ambrogio Spreafico emphasized the book of Genesis' message on "integral ecology."

"God wants a harmony of differences — we have a harmony of contrasts instead," he observed, calling for Laudato Sí to challenge "our way of being pastors and Christians in Europe."

Bishop Wellington Tadeu de Queiroz Vieira admitted that the sex scandals among clergy had resulted in fewer vocations to the priesthood.

"Our problem is our lack of consistency — our lack of holiness — our scandals prevent other young people from following our path," he noted.

"We are unable to convey the beauty of Christ. We become the announcers of ourselves with behavior that drives people away from Jesus. We have not been bishops and priests who have been holy in our own churches," he lamented.

He went on to redefine holiness, however, as "simplicity of life and dialogue and respecting differences," blaming the Church for "having the wrong idea of holiness" as "only looking to the heavens."