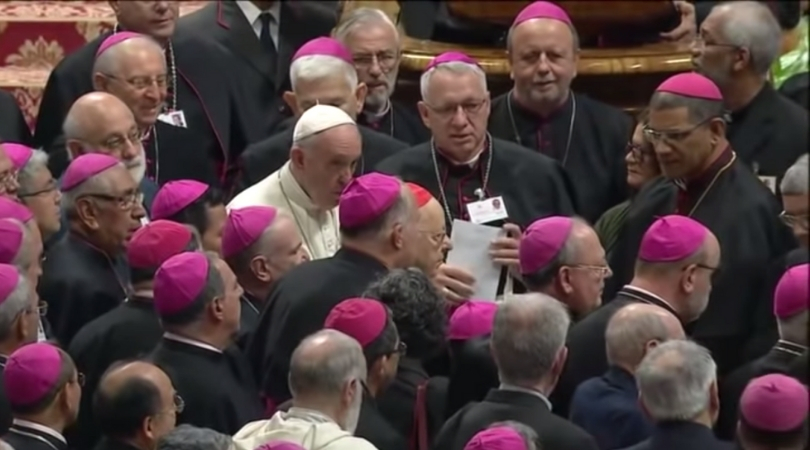 VATICAN (ChurchMilitant.com) - The Amazon synod fathers are proposing to add sins against the environment to the list of traditional sins, and Catholics are responding with frustration.

According to Vatican News, at Wednesday's general congregation, the second working day of the Amazon Synod, various synod fathers weighed in about the need for "ecological conversion," a phrase frequently bandied about in the Instrumentum Laboris (working document) as well as by synod leader Cdl. Claudio Hummes and others.

"A desire was also expressed for an 'ecological conversion' that would allow people see the gravity of sins against the environment as sins against God, against our neighbour, and against future generations," states Vatican News. "This would imply a need to produce and spread more widely a theological literature that would include 'ecological sins' alongside traditional sins."

This would imply a need to produce a theological literature that would include 'ecological sins' alongside traditional sins.

"There was a call from many quarters for the Church to become an ally to grassroots social movements," Vatican News continues, "to humbly listen to and welcome the Amazonian worldview, and to come to a deeper understanding of the meaning given by local cultures to ritual symbols, a meaning often different from the 'Western' tradition."

The well-worn topic of "dialogue" also came up, synod fathers calling on the international community to "walk together, in friendship" with the "native populations" as "guardians of the natural reserves," who "must be considered allies in the fight against climate change."

The day before, on the first working day of the synod, a number of synod fathers praised climate alarmist Greta Thunberg, whose apocalyptic speech before the United Nations in September has spurred some to compare her to the Blessed Virgin Mary and even the successor of Jesus Christ.

Global warming is a topic that makes several appearances in the Instrumentum, manmade climate change taken as a given even though the science on the matter remains far from settled. Hummes insisted at the pre-synod press briefing that the world is in a time of "crisis," ecological and social, and that the Church must respond to this crisis by "listening" to the voices of the Amazon, especially the indigenous populations.

Synod fathers on Wednesday also proposed greater lay involvement, "beginning with the promotion of the permanent indigenous deaconate and a greater development of lay ministry, understood as an authentic manifestation of the Holy Spirit."

"There were also calls for greater involvement of women in the life of the Church," according to Vatican News.

Backlash to the cardinals' proposals has been swift and severe, with thousands of responses, uniformly negative, posted online. An article on the topic garnered around 1,400 comments within 24 hours, a number of them blasting the pope for failing to focus on the mission of the Church.

"Shouldn't he be more concerned with theological matters and the immorality of our times and encouraging people to live more Christ-centered lives?" asked Cathy.

Someone with the username Call for Honesty commented, "I thought it was paganism that believed in a Mother Earth while orthodox Christianity believes is a sovereign, all-powerful Creator who maintains a world and universe characterized by order."

Almost Cowboy remarked, "Just came back from Rome where the Vatican is going through the ancient ruins looking for their next saint, Gaia."

"I'm not understanding his focus on climate change vs the need for saving souls and our salvation. He needs to resign and run for President of Argentina," said Theresa.

A number of Catholics criticized Church leaders for deliberately diverting attention away from the clerical sex abuse crisis.

James commented, "How about addressing the pedophilia problem before coming up with new sins you can commit?"

How about addressing the pedophilia problem before coming up with new sins you can commit?

"Take care financially of the hundreds of millions of boys that your cartel has raped and shut up for the balance," said Richard Poulin.

"This church fails to acknowledge sins against altar boys but it's willing to be a little more progressive about protecting trees," commented Luke Wann.