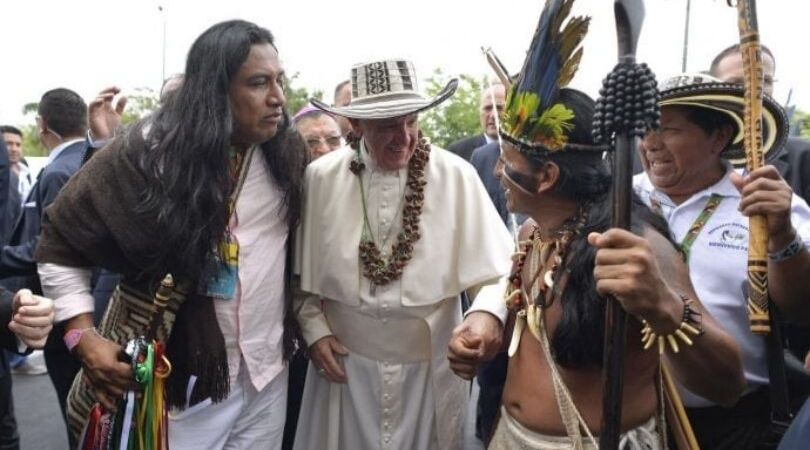 When interviewer Patrick Coffin asked Cdl. Burke if the working document may become "something definitive or authoritative for the Church," his eminence said, "It cannot. It cannot be."

The cardinal, known for his clear defense of Church teaching, made the comment during an interview that covered a wide range of topics culminating in his remarks about the synod called "Amazonia: New Paths for the Church and for an Integral Ecology" scheduled for Oct. 6–27.

Now Cardinal Burke adds his voice of criticism of the Amazon Synod to those of Cardinals Mueller, Brandmueller, et al:https://t.co/KR3vjDBgSm

"People may attempt that … but the document is an apostasy. ... This can't become official teaching of the Church. God willing, the whole business will be stopped," Cdl. Burke said.

God willing, the whole business will be stopped.

The cardinal defined apostasy as "a general defection from the Faith, a going away from Christ in a general way, and the many truths of the Faith."

According to the Catholic Agency for Overseas Development, the synod is "a way for the Church to listen to the people of the Amazon, and respond with them to the devastation facing them and their environment."

On 27 May, the Holy Father will receive in a private audience Raoni, Chief of an #Amazonian indigenous group.
This meeting attests to Pope Francis' care for the Amazonian people and environment, as well as to his commitment to safeguard our Common Home. pic.twitter.com/iYZoVptJRA

The Vatican document describes the Amazon as "a mirror of all humanity" in "all its biodiversity and cultural richness." Pope Francis himself has stressed the ecological importance of the Amazon and Congo basins "for the entire earth and for the future of humanity," which statement aligns the synod with larger secular conversations about climate change.

"To defend it, we must all make changes — to ourselves, to our nations, to the Church," the document site dictates.

Cardinal Cláudio Hummes, a Brazilian defender of social justice and president of the Pan-Amazonian Church Network (REPAM) is leading the synod. In a recent interview, Cdl. Hummes underscored the importance of diversity:

Cardinal Burke is not the only critic of the Amazon Synod's working document known as the Instrumentum Laboris.

Another important critic is German Cdl. Walter Brandmüller, who announced that it "contradicts the binding teaching of the Church in decisive points and thus has to be qualified as heretical."

"Inasmuch as even the fact of Divine Revelation is here being questioned, or misunderstood, one also now has to speak, additionally, of apostasy," he said, referring to issues of liturgy, spirituality and celibacy.

Cardinal Brandmüller wrote that the agenda "burdens the Synod of Bishops, and finally the Pope, with a grave breach with the depositum fidei, which in its consequence means the self-destruction of the Church or the change of the Corpus Christi mysticum into a secular NGO with an ecological-social-psychological mandate."

For any other foundation no man can lay, but that which is laid; which is Christ Jesus (1 Corinthians 3:11).

Church Militant has previously reported on Cdl. Gerhard Müller's criticism of the Instrumentum Laboris. On July 16, the Feast of Our Lady of Mt. Carmel, Cdl. Müller issued a statement that slammed the document's "false teaching," saying it represents "a radical U-turn in the hermeneutics of Catholic theology."

The synod's agenda includes "abolishing celibacy, [ordaining] women to the priesthood and promoting them to key positions of power so as to tackle clericalism and fundamentalism, conforming Catholic sexual morality to gender ideology and an appreciation for homosexual practices," Müller wrote.

Cardinal Müller prefaced his statement with St. Paul's words to the Church in Corinth: "For any other foundation no man can lay, but that which is laid; which is Christ Jesus" (1 Corinthians 3:11).

In the interview with Coffin, Cdl. Burke brought attention to secular media calling Pope Francis a "revolutionary," a description with which critics of the synod agenda would agree. But Burke said, "If you tell me that the Pope is a revolutionary, I would be very concerned because that has nothing to do with the papacy."

The primary function of the papacy is to "safeguard the doctrine of the Faith and the Church's discipline in order to be the principle and foundation of unity in the Church," he said.

Coffin asked Cdl. Burke about the credibility of Abp. Carlo Maria Viganò and the publication of his letters exposing the gay mafia within the Church hierarchy.

His eminence said he knows Abp. Viganò to be a "person of integrity," "hardworking, who knows canon law." Cardinal Burke said the archbishop has an impeccable record and is "not looking for personal gain but is trying to set his conscience right."

The cardinal said it is a "sad situation" that Abp. Viganò must live in hiding and his suffering exemplifies how faithful Catholics must "soldier on and lead a virtuous life."

Cardinal Burke is one of four cardinals (two are now deceased) who sent formal questions, called dubia, to Francis in late 2016 aimed at clarifying "contrasting interpretations" of controversial sections of Amoris Laetitia.

The dubia sought to elicit a "Yes" or "No" response "without theological argumentation."

To date, Francis has not responded to the dubia, nor has he stopped the growing swell of confusion among the faithful about Church teaching and Her future.