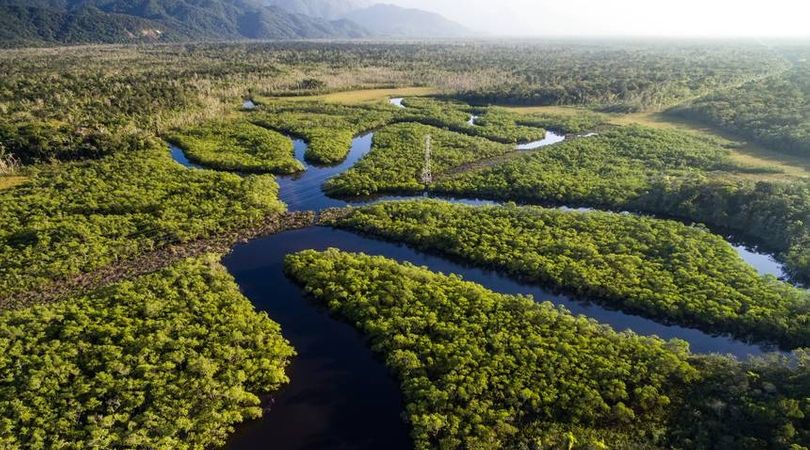 VATICAN (ChurchMilitant.com) - Activists are urging the Vatican to stop investing in oil and mining companies in the Amazon, even as the synod panel dodged the issue of the Amazonian Church receiving grants from the Ford Foundation, which funds abortions rights groups and LGBT activism.

Patricia Gualinga, foreign relations leader of the Kichwa people of Sarayaku based in the Ecuatorian Amazon, told media that the Church has investments in oil and mining companies and "must adopt a divestment policy" in the region.

Gualinga has been working to protect her people from human rights violations resulting from oil extraction projects by Chinese companies on their land.

Ecuador has around 8.3 billion barrels of crude oil reserves, the third-highest in the world after Venezuela and Brazil.

In 2012, the Kichwa village of Sarayaku won a massive victory when the Inter-American Court of Human Rights ruled that the Ecuadorian government must consult with indigenous communities, as well as pay for physical and moral damages, after it auctioned off part of their territories to oil companies.

In 2017, over 40 Catholic institutions announced they would divest from fossil fuels, on the anniversary of the death of St. Francis of Assisi, a year after the publication of Pope Francis’ encyclical Laudato Sí.

Thursday's panel, however, refused to answer how Brazilian bishops and Catholic communities could accept money from the Ford Foundation, which sends millions of dollars towards promoting abortion and gender ideology.

In response to a question asked by journalist Ed Pentin, Abp. Roque Paloschi of Porto Velho, Brazil responded by saying that accounts belong to CIMI (the Brazilian Bishops' Conference Indigenous Missionary Council) are "transparent" and available on the Internet.

He added that they are checked internally as well as by the Brazilian government and there have been no "formal accusations."

Commenters on social media slammed Paloschi’s response as a "non-answer," calling the archbishop an "expert in obfuscation of the obtuse."

"Is inculturation an end in itself or is it a means to an end?” asked this reporter, citing the example of the Indian Church, which was given permission by the Vatican to incorporate Hindu symbols into the liturgy in 1969.

Church Militant explained how inculturation had led to a moratorium on evangelization in India: "Evangelization is now defined as 'making a Hindu a better Hindu.' It has also led to religious pluralism. Even worse, the Church is facing a backlash from militant Hindus who are accusing priests of cultural appropriation and desecrating their sacred symbols."

"Will the Church continue to be serious about evangelization in terms of bringing people to the knowledge of Jesus Christ and baptising them as Catholics?" Church Militant asked.

Paloschi refused to provide a direct answer, responding, "All I can say is that inculturation respects this process on both sides, our idea is not to eliminate the other persons cultures, but to preserve some seeds that are present."

"Evangelization is not carried out through proselytising but through witnessing. An encounter with Christ brings new life without abandoning one's peoples and culture," he noted.

At #SinodoAmazonico #AmazonSynod Presser; +Roque Paloschi, Archbishop of Porto Velho (Brazil) responds "All I can say is that inculturation respects this process on both sides, our idea is not to eliminate the other persons cultures, but to preserve some seeds that are present" pic.twitter.com/0QtIx5CIYy

This response also garnered negative reactions on social media from Catholics frustrated by his unclear response.

"What a pathetic answer," said one commenter. "Our Catholic ancestors must be so ashamed right now. I know I am."

"Gibberish and rubbish," added another commenter.

The panel was asked how it was responding to a major challenge from evangelical and charismatic groups who were proselytizing and adding exponentially to their numbers by converting indigenous peoples as well as Catholics to their denominations.

"Was this because local evangelical pastors outnumbered Catholic priests and were present close to the people in almost every community?" asked one journalist.

Paloschi insisted there were "no frictions with evangelical groups, on the contrary, we are walking together with them close to the people," he said.

"We have a relationship based on respect and a path of dialogue to try and find answers to the pleas of these communities in respect to the rights of the indigenous peoples," he continued. "There is great synchronicity and very close relationships and also cooperation, while always respecting what is specific to every church."

Father Justino Sarmento Rezende, a Salesian and the only indigenous priest on the panel, responded to a question on celibacy and clarified that celibacy was not necessarily a problem for the indigenous peoples — provided it was voluntarily chosen and accepted as a gift from God.

"It is very important to live celibacy by prayer and making an effort," he said. "If someday I say living in celibacy is not for me and my celibacy is no longer a witness, I will quit. But celibacy is a virtue that can be lived out by both men and women in any and every culture."

His comments implicitly rejected an earlier suggestion by German Bp. Erwin Kräutler that "indigenous people do not understand celibacy" and therefore could not be expected to have celibate priests.