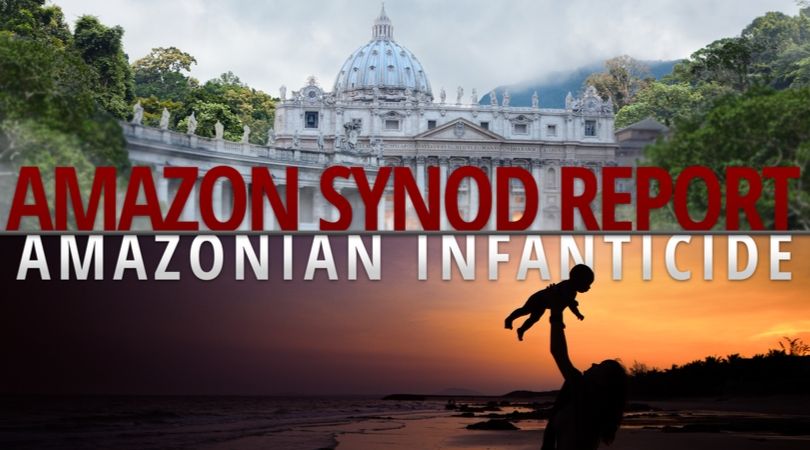 Infanticide — probably not the topic Pope Francis and Amazon synod organizers wanted stealing headlines, but it is.

In the Vatican press hall today, reporters were reading stories from international publications talking about the issue.

One reporter in particular, Giuseppe Rusconi, was delighted to see the expanding coverage. It was his question about infanticide that all over the world that Peruvian Cdl. Pedro Barreto went nuclear over, denying it happens and demanding proof.

Well, "proof," such as it is, comes in numerous forms.

For one, an ongoing debate in the Brazilian Parliament, where a law to ban the practice among the indigenous Amazonian tribes is being debated.

While that might sound strange to Western ears that a debate is even being had about burying alive children born with deformities, it is, in fact, the case.

The liberal position is that native peoples cannot be told what to do by the state, even when it comes to killing their own children, because those are imperialistic and colonialistic.

The position is supported by leading South American academics, who publish papers on the issue, this one by one of the leading proponents — Dr. Rita Segato — who argues that very point.

The liberal position is that native peoples cannot be told what to do by the state, even when it comes to killing their own children, because those are imperialistic and colonialistic.

Segato's paper is published on the website of a pro-indigenous organization called Cimi.

If a link on the Brazilian bishops' website proving that the practice exists and a debate in the Brazilian Parliament over whether it should be allowed to continue owing to political correctness isn't enough for Cdl. Barreto, then perhaps this will help.

It's a documentary reenactment showing how some tribes of the Amazon go about the practice of burying children alive when they are born with deformities — or other reasons the village or tribes think they should not be allowed to live. What other reasons could that be?

That issue came up at yesterday's press conference and was addressed quite ably by Bp. Wilmar Santin of Itaituba, Brazil, who quite openly admitted that sometimes, at least historically, when twins are born to some tribes, it is the belief that one is evil and the other good.

So, one of them is killed. On occasion, because parents and villagers can't decide which one is evil and which one is good, both newborns are killed.

He added that he doesn't know if this is still the practice and has seen evidence that it may be changing, but he can't say for sure, which brings us back to Cdl. Barreto and his getting lit up over the issue, even pulling off his translator headphones to deny it when Rusconi asked the question.

Keep in mind the documents Rusconi found on the Brazilian bishops' website acknowledging infanticide among some indigenous tribes.

Barreto isn't just some run-of-the-mill cardinal here at the synod. He is a Pope Francis-created cardinal. He is also vice president of the Peruvian bishops' conference.

But most importantly, he is vice president of the Pan-Amazonian Ecclesial Network and is one of the three president-delegates of the current synod.

That's some pretty big firepower. In short, it doesn't get very much bigger than Barreto, and yet he denies the practice exists in spite of there being the proof.

Brazilian Cdl. Cláudio Hummes is the senior prelate of the synod and a long-time associate of Pope Francis.

It is difficult to believe that the president of the conference is totally unaware of a debate in his home country's parliament over a bill that would allow infanticide to continue and that his own bishops' conference has — or rather, had — documents acknowledging it all.

Who took those documents down from the site within hours of the topic being brought up in the press hall? Who ordered them to be taken down? Why?

Lots of questions here on a day where another proposal put forward in the synod suggests that a list of so-called ecological sins should be developed and added to lists of more traditional sins.

Perhaps synod fathers might find room on that eco-sin list for burying deformed children alive — that is, if it wouldn't offend sensibilities about impinging on the ancestral wisdom of the people of the forest, who the Church has much to learn from through listening and accompanying them.

Reporting to you from the Pan-Amazon Synod here at the Vatican.