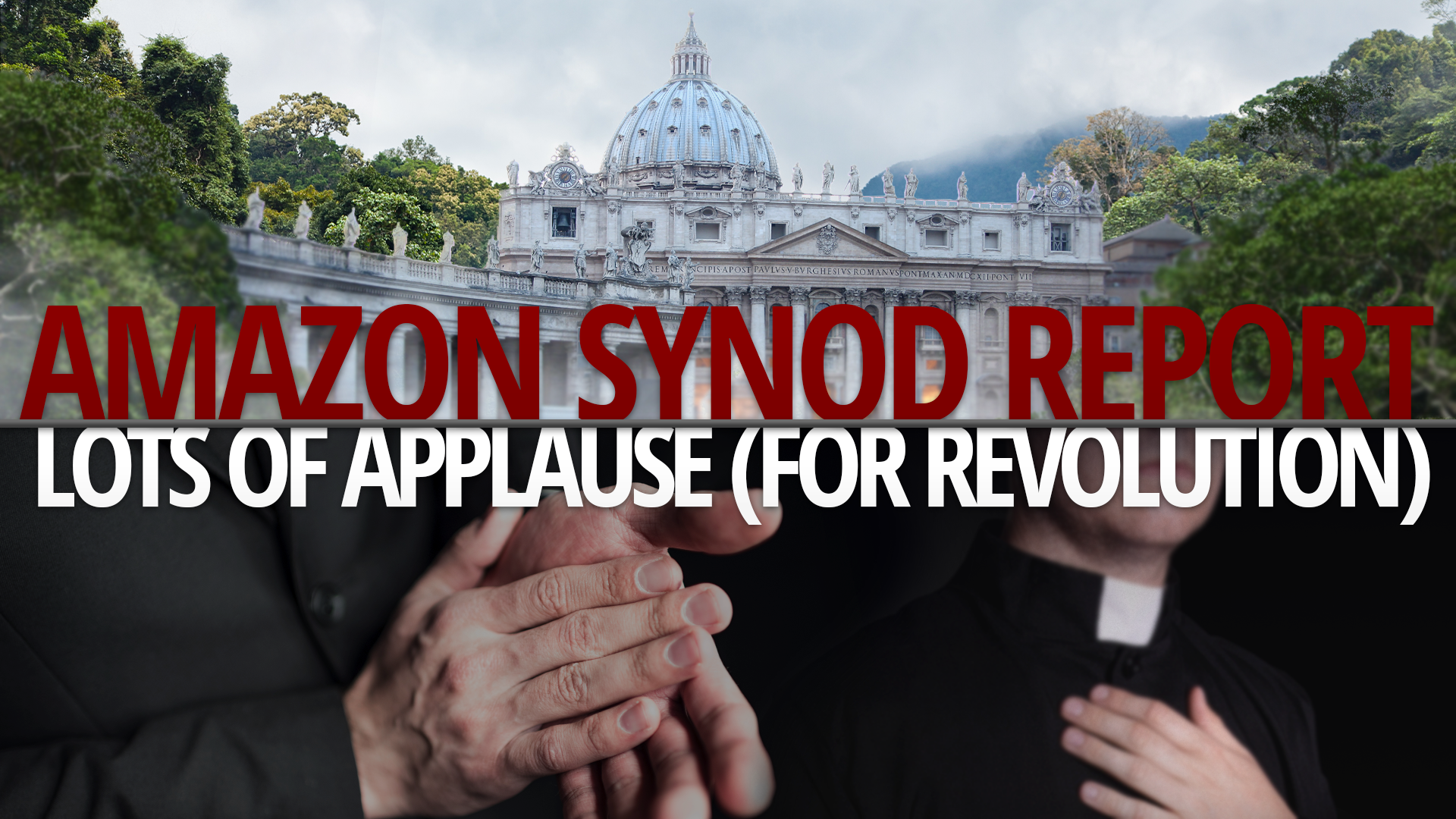 And it is revolution

Today: the applause. Lots of applause.

Every time something comes up opposed to tradition, the hall of bishops here breaks into applause. For example, Cdl. Lorenzo Baldisseri yesterday announced that the bishops in attendance were being granted permission to not wear their standard bishops' cassocks and instead start wearing their black clerical suits, the ones that make them look like CEOs.

Really? Is wearing a cassock such a heavy cross for a bishop to bear? Poor dears.

And then, there was this applause: It came in response to the comments from the pope taking a jab at birettas — the three-cornered hat that more tradition-minded priests often wear. As the Pope tells it, he had overheard someone making fun of the indigenous people of the forest headdress worn by a man bringing up the gifts at the opening Mass. So he had this to say.

Pope Francis: "What is the difference between this headdress, and the biretta used by officials of this dicastery?"

And of course that little stab at those wicked, mean-spirited, small-minded, traditional types brought down the house.

What the pope did not say is that he is the one who actually started this war of words over hats.

Last week he made fun of, and even insulted, priests who wear the saturno, a round hat. He accused clergy who wear them as well as cassocks of having serious problems, moral problems, imbalances.

That's quite a charge. If you wear traditional priest clothing, you are mentally disturbed? Wow!

But apparently, papal insults are not enough to deter actual sales of saturnos here in Rome, where shopkeepers who sell them say they are flying off the shelves since the pope made his comments.

Saturnos are flying off the shelves since the pope made his comments.

These little outbursts go to show just how intense this revolution has become; and do not kid yourself — it is revolutionary, plain and simple — a paradigm shift.

Cardinal Blase Cupich brought the word up months ago speaking to a gathering of like-minded revolutionaries in Cambrdige, England.

It is an overthrow of all that has gone before — right down to the hats and cassocks.

But many Catholics are trying to understand where all this revolution came from. Why, all of a sudden, seemingly out of thin air, are we talking about a Church with the oft-repeated and quickly growing tired phrase "an Amazonian face"?

What is happening at this synod is the canonization of liberation theology, and its nearly three-decade pushing and funding by the Church in Germany.

In short, the indigenous people — another phrase that has worn out its welcome here in Rome — are being used by leftist European Churchmen, largely from Germany, who have no regard for the souls of these Amazon tribes, but do see the opportunity to exploit them.

One of the recurring themes here running through the preparatory documents and presentations is: Colonialism is bad.

Taken in context of a religious synod, the clear implication is that converting people to Catholicism — as the Church was commanded to do by the Son of God — is bad.

That's the reason for all the talk about the great spiritual gifts possessed by the indigenous people of the forest, and how we can learn from them, something synod organizers keep calling "ancestral wisdom."

There is zero talk in the run-up to the synod of conversion, repentance or accepting the Gospel.

There is little talk, however, of the fact that approximately 20 of the nearly 400 different tribes of the "people of the forest" still practice infanticide, for example. It's not clear precisely what the Church can "learn" by "listening" to the sounds of babies' throats being slit.

It's not clear precisely what the Church can 'learn' by 'listening' to the sounds of babies' throats being slit.

But in today's presser, when the topic came up, Jesuit Cdl. Pedro Jimeno, archbishop of Huancayo, Peru, erupted when a reporter asked about it, denying that this happens — or at the very least that he had ever heard about it. He claims there is no evidence of it.

This is the same cardinal who earlier this year said that launching criminal charges for the sex abuse cases in Peru would be very, very negative for the Catholic Church there.

Another topic: the need for formation, but with a qualifier — "inculturated" formation — whatever that means.

And at the synod today, the topic came up — again — of colonialism.

The entire press conference today, in fact, sounded like a socialist economics class — which is fine, we suppose, but again, what does this have to do with salvation?

This synod is presupposing salvation through better economics for those who are poor. That is the heart of liberation theology — which is getting lots of applause here in Rome.

Just don't show up in a biretta.