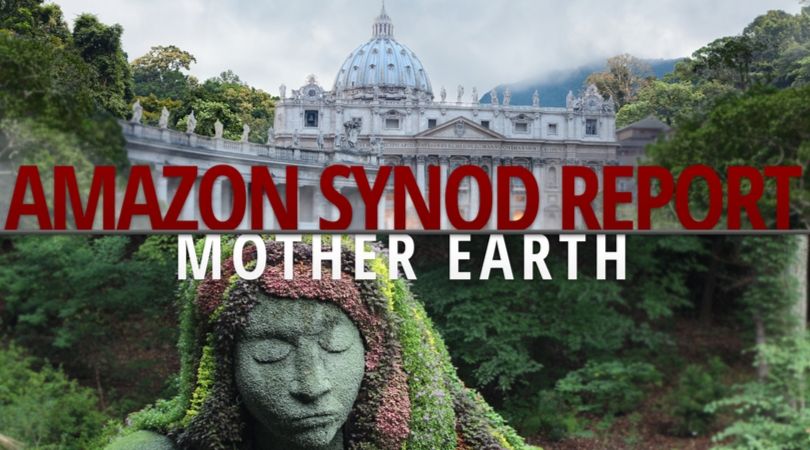 It’s not just another 'Mother Nature'

What is unfolding here in Rome is plain and simple liberation theology, which is neither liberating nor any substantive theology.

The so-called Amazonian face that the synod organizers want to present is actually little else than a mask — a mask to cover over liberation theology.

This system was condemned by Pope John Paul II not only in writing and proclamations, but also in a dramatic visible on-camera fashion.

A Nicaraguan priest by the name of Ernesto Cardenal was a well-known liberation theologian who participated in the Sandinista revolution in that country in the 1970s.

In 1979, he became minister of culture in the new Marxist regime.

In 1983, Pope John Paul went to Managua, and Cardenal was part of the official government welcoming entourage.

John Paul ripped into the liberation theologian with the international press rolling cameras, chastising the errant priest and ordering him, "You must fix your affairs with the Church."

Liberation theology in South America has been financed for decades by the German bishops, causing great theological unrest.

It was not a good photo op for the liberation theology movement.

The next year, 1984, John Paul suspended Cardenal from the priesthood.

And here's the kick, as the finishing touches were being applied to the synod working document — the Instrumentum Laboris — Pope Francis lifted John Paul's suspension of Fr. Ernesto Cardenal and "granted with benevolence the absolution of all canonical censures."

The move was understandably seen by many as a public resurrecting of liberation theology, which in truth had never really died, but just gone somewhat underground during the pontificates of John Paul and Benedict.

So now, roaring back to center stage here in Rome is the errant system, which does its best to combine Marxism and Catholicism in a stated attempt to "help the poor."

Liberation theology in South America has been financed for decades by the German bishops, causing great theological unrest and setting the stage for just such a revolution we see unfolding now.

In order to cloud over the issue of liberation theology, per se, much is being made of the need to be a so-called listening Church, listening to the wisdom of the people of the forest who are so close to Mother Earth.

This is a ruse to appear to be concerned with the poor, when in truth the poor are simply being used, weaponized as the indigenous peoples of the Amazon.

Because these roughly 400 communities or tribes in Amazonia almost all engage in some form of earth or nature worship — pagan worship — or have deep roots in it stretching back thousands of years, the instigators in Rome and Munich recognized this and mention it seven times in the working document.

For example, "The aggression towards this vital zone (Amazon) of Mother Earth and its inhabitants threatens their subsistence, their culture and their spirituality."

Again, the Amazon people have the right to health and to "live healthily," which means harmony "with what Mother Earth offers us."

'Mother Earth': but this is a pagan expression. The earth comes from God and our mother in faith is the Church.

Further, "It is necessary to grasp what the Spirit of the Lord has taught these peoples throughout the centuries: faith in the God Father-Mother Creator; communion and harmony with the earth; ... the wisdom of civilizations going back thousands of years ... the living relationship with nature and "Mother Earth."

Almost every time the term "Mother Earth" appears, it appears just like that, in quotation marks.

That is a recognition of the language of the Amazonian communities, perhaps best summed up by a Sr. Edia López of the Sisters of Mercy, "Mother Earth is a goddess, venerated by indigenous peoples."

It is this kind of language that has raised deep concerns. In a recent interview, no less than Cdl. Gerhard Müller said of this kind of talk: "'Mother Earth': but this is a pagan expression. The earth comes from God and our mother in faith is the Church."

Mother Earth worship, as was appeared to be the case in the Vatican Gardens last week, is just that — "worship."

Worship is reserved to God alone, so the issue arises, just who is being worshipped here.

In the spirituality of the millennia-old religions of Central and South America, the name of Mother Earth is Pachamama, the goddess of fertility. She is revered as the goddess who presides over planting and harvesting, embodies the mountains and causes earthquakes.

She is, in short, the giver of life, and the source of the earth, sun, moon and water. And she is not just a conceptual entity, a poetic name for creation, like Americans refer to "Mother Nature."

Pachamama is seen as a conscious personal being. Sacrifices are made to her.

It is true that different religions, and there are many in the region, view "Mother Earth" with varying understandings, but this Pachamama spirituality has deep, deep roots in the forest of the Amazon and beyond.

This is why perhaps the term "Mother Earth" is largely presented in quotes in the Vatican's working document.

There is a great deal of overlap in some rituals of the Church and Pachamama worship: sprinkling of water, Sunday festivals, the first Friday of the month and the burning of incense. In some of these groups, on special feast days, food is actually set aside for Pachamama for her to consume.

Mother Earth is not just a concept, and this of great concern to faithful Catholics.

She is a real being, so real, in fact, that the translation of her name found a home in the working document of this Synod on the Amazon.

For those among the apologist Catholic liberal media who would like to provide more cover for this insanity and pretend this isn't an issue, that Mother Earth is just a local substitute for Our Blessed Mother — two words: stop lying.

Pachamama is a goddess of the people of the forest. There can be no synthesis between her and Almighty God.