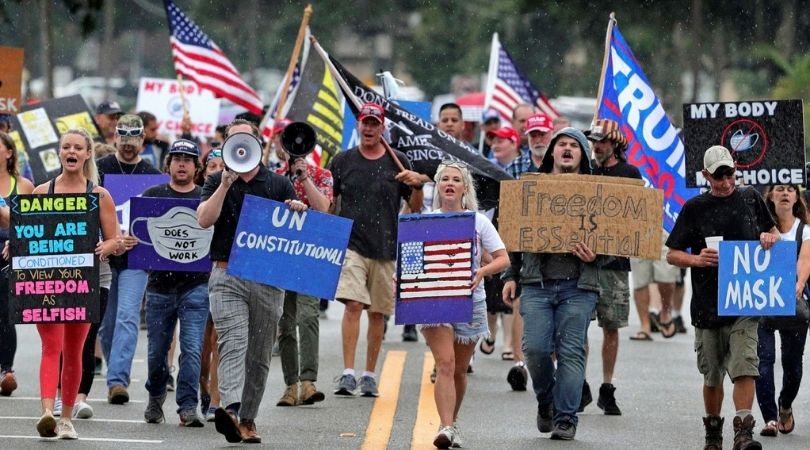 Responding to a Marxist takeover

In Article Two of the U.S. Constitution, the president is declared to have the "executive power" in the nation. One of the three branches of government, the executive branch is made up of the president, vice president and the cabinet. It bears responsibility for enforcing the laws of the land.

The Constitution also stipulates in the first section of the 14th Amendment, "Nor shall any state deprive any person of life, liberty or property, without due process of law."

However, two days after Joe Biden — a self-described Catholic — was sworn in, he and Kamala Harris released a statement celebrating the 48th anniversary of Roe v. Wade, the landmark 7–2 Supreme Court decision that unconstitutionally legalized abortion on demand in the United States. Biden and Harris assured supporters, "We are deeply committed to making sure everyone has access to care — including reproductive health care." This is a deceptive, cover-up way of championing baby murder or abortion, which, in America, kills about 3,000 unborn children every single day. The statement continued with Biden and Harris announcing their commitment to "codifying Roe v. Wade and appointing judges that respect foundational precedents like Roe."

Since January 20, Joe Biden has advanced the gay and transgender agendas, among many other leftist causes, with his signing of more than 50 executive orders.

Along with his public support of the slaughter of babies in the womb, one of the over 50 executive orders he's signed is the Executive Order on Strengthening Medicaid and the Affordable Care Act (or the ACA).

The ACA (also known as Obamacare) was infamously signed into law in 2010. It's the so-called health insurance plan that covers abortion, contraception and many other unnatural, unhealthy and unnecessary procedures.

Biden has pushed the abortion needle further than ever — making moves to get rid of the Hyde Amendment, which has blocked federal Medicaid funding for abortion for nearly 50 years.

Although more Americans than ever are signed up for the ACA, according to Obamacareabortion.com, there are currently 26 states that have opted out of elective abortion coverage.

As of late, Biden has pushed the abortion needle further than ever — making moves to get rid of the Hyde Amendment, which has blocked federal Medicaid funding for abortion for nearly 50 years.

In the Code of Canon Law, a code of ecclesiastical laws governing the Catholic Church, it is clearly stated that "those who have been excommunicated or interdicted after the imposition or declaration of the penalty and others obstinately persevering in manifest grave sin are not to be admitted to Holy Communion" (canon 915).

This law governing the Catholic Church has been widely ignored by American bishops for decades, as prelates have been handing over Our Lord's sacred Body and Blood to pro-abortion Democrats like Joe Biden, Nancy Pelosi, John Kerry and many more.

Those who have been excommunicated or interdicted and others obstinately persevering in manifest grave sin are not to be admitted to Holy Communion.

At the U.S. bishops' annual spring general assembly, one of the topics discussed (amazingly enough) was whether or not they should follow Church teaching, specifically canon 915.

Seven in ten self-identified Catholics do not believe in the Real Presence of Christ in the Eucharist — saying it's merely symbolic.

This is the case, first, because of a woeful lack of teaching the Faith for decades — but also because pro-abortion politicians have been allowed for the past 50 years to sacrilegiously receive the Blessed Sacrament.

Instead of issuing a statement pledging to enforce canon 915, as the Church demands, the bishops at their spring meeting voted to simply draft a document on the meaning of the Eucharist (168 were in favor of discussing canon 915, 55 were not and 6 abstained from the vote).

"The Sacrament of Holy Communion is central to the life of practicing Catholics, and the weaponization of the Eucharist to Democratic lawmakers for their support of a woman's safe and legal access to abortion is contradictory."

Among the nearly 60 self-identified Catholic politicians who signed the statement was Rep. Ted Lieu of California, who added his own personal tweet on top of the statement, directly telling the bishops he supports:

For Catholicism in America, Lieu is not radical, but rather he accurately represents the status quo.

According to Pew Research Center: