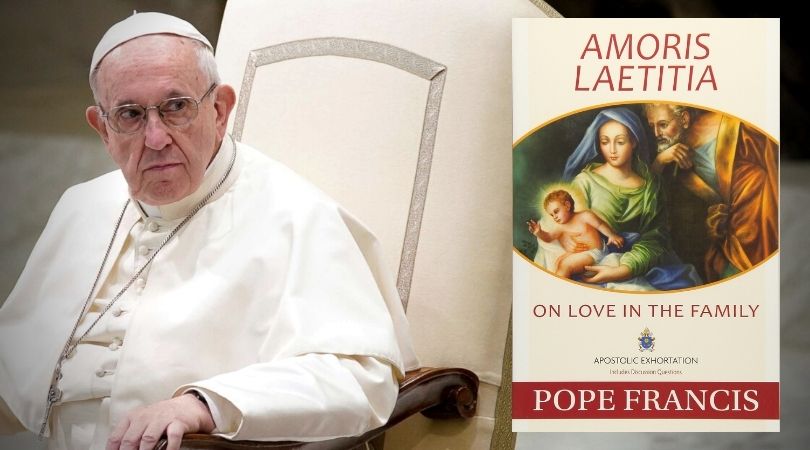 Catholic doctrine, courtesy of Christ Himself, holds that "anyone who even looks at a woman lustfully has already committed adultery with her in his heart" (Matthew 5:28). Adultery is, in itself, evil. Anyone in an adulterous relationship is living in a state of grave sin (sin that, if committed with full knowledge and consent, leads to damnation). There is no half-grave sin or one-third-grave sin when it comes to an action that is, per se, evil. Saint Paul warns, "Adulterers will not inherit the Kingdom of God" (1 Corinthians 6:9). And again, Christ informs us, "Whoever shall put away his wife and marry another commits adultery" (Mark 7:21).

Nebulously, Pope Francis, in his apostolic exhortation Amoris Laetitia, says, "The degree of responsibility [for divorce and remarriage] is not equal in all cases" (§300). He continues, "It can no longer simply be said that all those in any 'irregular' situation are living in a state of mortal sin and are deprived of sanctifying grace" (§301).

Nonetheless, the 1992 Catechism of the Catholic Church ("CCC") explains, "There are acts which, in and of themselves, independently of circumstances and intentions, are always gravely illicit by reason of their object; such as blasphemy and perjury, murder and adultery" (§1756).

The language of Francis — "it can no longer be said" — implies that things have changed in today's world. But the notion of a mutable depositum fidei was condemned as a modernist error by Pope St. Pius X in 1907 in the encyclical Lamentabili Sane. Specifically, it pans the proposition that "Christ did not teach a determined body of doctrine applicable to all times and all men, but rather inaugurated a religious movement adapted or to be adapted to different times and places" (error 59).

Catholic teaching from the apostle St. Paul is clear regarding the "works of the flesh," which include violations of the sixth commandment: "They who do such things shall not obtain the Kingdom of God" (Galatians 5:19–21). The apostle St. Peter speaks of those who have "eyes full of adultery," predicting that such people will "perish in their corruption" (2 Peter 2:12–14).

Conversely, Pope Francis asserts, "No one can be condemned forever, because that is not the logic of the gospel" (Amoris Laetitia, §297). But Scripture and the Catechism seemingly say the exact opposite, paraphrasing Matthew 13:41: "He will send His angels, and they will gather all evildoers and throw them into the furnace of fire." The same catechetical passage also cites Matthew 24:41: "And that He will pronounce the condemnation, 'Depart from me, you cursed, into the eternal fire.'"

Pope Francis, lifts the following partial sentence from Pope John Paul II's apostolic exhortation Familiaris Consortio: "Where for serious reasons, such as the children's upbringing, a man and a woman (living in an adulterous union) cannot satisfy the obligation to separate." However, he fails to finish the quote with John Paul's demand that such couples "take on themselves the duty to live in complete continence, that is, by abstinence from the acts proper to married couples." Pope Francis completely ignores this clarifying admonition and muddies the moral waters by saying that such couples "should not be pigeonholed or fit into overly rigid classifications leaving no room for a suitable personal and pastoral discernment" (§298).

The Church has always made clear that circumstances never justify grave sin. The Catechism teaches that "a good intention ... does not make behavior that is intrinsically disordered, such as lying or calumny [or, for present purposes, adultery, fornication and homosexuality] good or just. The end does not justify the means" (§1753).

The Church has always been clear that circumstances never justify mortal sin.

Christ demands that sinners, such as the woman caught in adultery, "go and now sin no more" (John 8:11). But Pope Francis holds that "some priests demand of penitents a purpose of amendment so lacking in nuance that it causes mercy to be obscured by the pursuit of a supposedly pure justice" (Amoris Laetitia, §311, n. 364). His minimization of the morally necessary firm purpose of amendment when confessing sin is tantamount to simultaneously calling for the destruction of the sacraments of confession, Eucharist, matrimony and even of extreme unction and Holy Orders.

After tirelessly battering us for a whole year with "mercy, mercy, mercy," this is practically a green light to disrespect the Blessed Sacrament by receiving Jesus in a state of mortal sin. How is this not tacit permission for a manifest sinner to stay in an adulterous or homosexual liaison or to continue fornicating? This is the denial of the sacraments that prepare us to face God at the end of our lives; it will send souls in the state of mortal sin straight to Hell because they have not been required to have true repentance and so do not have the necessary absolution for their sins. This amounts to a priest violating his mandate to save souls by not telling the supernatural truth to penitents. This complicit silence has never been part of Church teaching.

Jesus calls for "conversion of the heart," an interior conversion, which, in turn, "urges expression in visible signs, gestures and works of penance" (CCC, §1430). Without a firm purpose of amendment, there can be no interior conversion. Interior repentance is a resolution to change one's life and conform one's heart to God. It is a complete turning away from sin, a detestation of evil actions committed (CCC, §1431). This has always been the teaching of the Church.

A firm purpose of amendment is the manifestation of the grace of God itself working in the heart of the penitent. It is the direct result of the mercy of God working in our souls to bring us from the deplorable state of mortal sin into His loving presence. Our Catechism was written under the direction of Pope John Paul II, who followed the clarity called for by Christ in Matthew 5:37: "Let your 'yes' mean 'yes,' and your 'no' mean 'no.' Anything more than this comes from the evil one."

This complicit silence has never been part of Church teaching.

But Pope Francis calls for an ambiguous approach: "Avoid a cold bureaucratic morality in dealing with more sensitive issues" (Amoris Laetitia, §312). Now, either the teaching of Christ is the truth, or it is not. At his trial, Jesus said to Pilate, "For this was I born, for this I have come into the world, to give witness to the truth" (John 18:37). He would be contradicting himself if he were to allow the spread of a new interpretation of sin and virtue under the guise of false mercy and Francis' so-called "surprises of the [Holy] Spirit."

By saying that priests who demand penitents have a firm purpose of amendment are somehow obscuring the mercy of God, Pope Francis is opening the doors to the idea of universal salvation — the idea that God's mercy is so great that we all must be saved. Mercy then becomes greater than the freedom of choice given to man to choose God. It's this free choice that allows man to share in God's nature. We would then no longer have the ability to choose God with our free will.

Is saying "I choose God, but won't change my life to conform with His commandments" somehow what is meant by being surprised by the Spirit? Is Pope Francis suggesting that we shall be saved in spite of ourselves? Even if we do not have a firm purpose of amendment, will the mercy of God somehow overcome it? What this is saying is that even while rejecting God by refusing to turn away from sin, God's Mercy will prevail! Take it to its logical conclusion, and you have final salvation for everybody, as God's Mercy overcomes all opposition.

If Amoris Laetitia, §311 is read at face value and taken to its logical conclusion, then there seems to be no need for true contrition, no need for us to turn away from sin. After all, won't God's mercy triumph anyway? Pope Francis appears to confirm this, writing, "No one can be condemned forever, because that is not the logic of the gospel" (Amoris Laetitia, §297). If we are all saved in spite of ourselves, then are we predestined for salvation? If we are predestined for salvation, then we have no say in our own salvation. We are no better off than animals, who have no freedom of choice.

The mystery of sharing in God's nature does entail choosing. There are many who choose not to be with God, which is demonstrated by their actions in this life that represent a turning away from God's teaching.

The Church is the guide. It is an onerous obligation on priests to tell people the truth about life with God. Life with God does not come automatically. We must strive for it. The gate is narrow and few find it; but the road to Hell is wide and easy and many take it (Matthew 7:13–14). Priests who do not insist on a firm purpose of amendment, who do not insist that penitents change their sinful lifestyle and turn back to God, will have to face God's stern judgment for omission of duty. They will be held responsible for the terrible sacrileges against the Blessed Sacrament perpetrated by those who receive Christ in a state of mortal sin.

Amoris Laetitia is a document published by the Vatican for the whole world to read — and it has Pope Francis' signature on it. It is he who is authoritatively seeking to promote this new interpretation of the gospel. Yet he has refused to answer questions from cardinals, bishops and theologians seeking much-needed clarification.

But "who are we to judge," one may ask? We are the Church. It is the teaching of our founder Jesus Christ that is at issue here. It is our duty to respond, to not let error or ambiguity pass unchallenged. We must not — out of false piety, false respect for authority — abandon our duty to fight for truth and leave doctrinal problems for somebody else to deal with. We must pray for the pope, yes, but we must also oppose dissent from authentic Catholic teaching. Canon 212 gives us the right and the duty to speak. 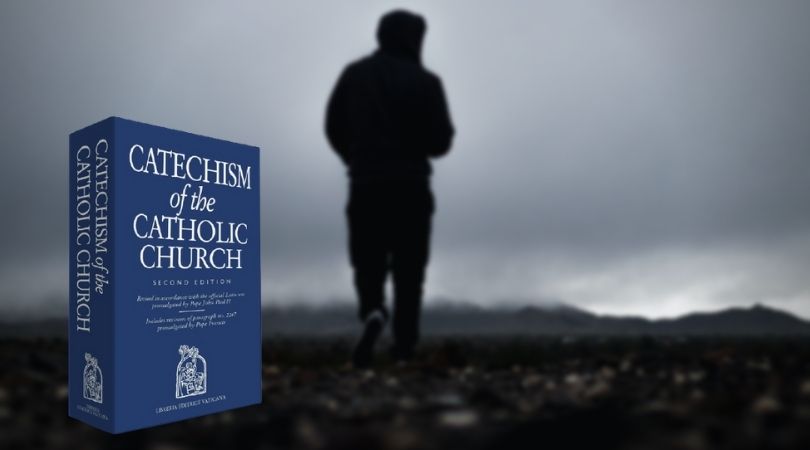 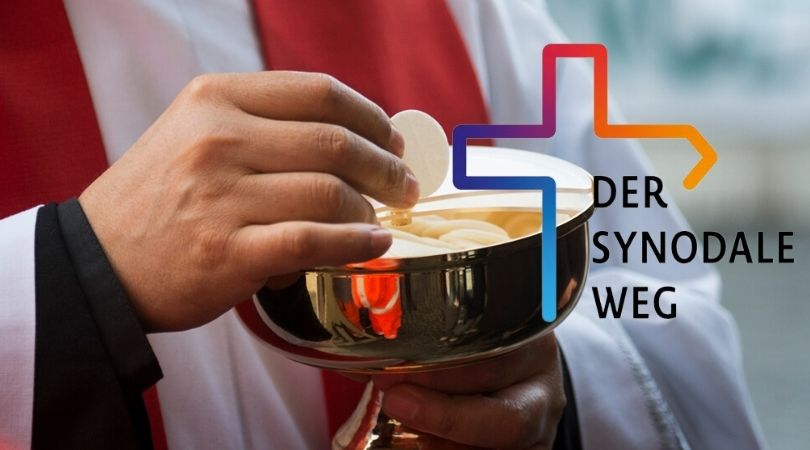 Schism in the Catholic Church — Again!
By Church Militant   •   0