Anatomy of a Martyrdom: For Love of Souls 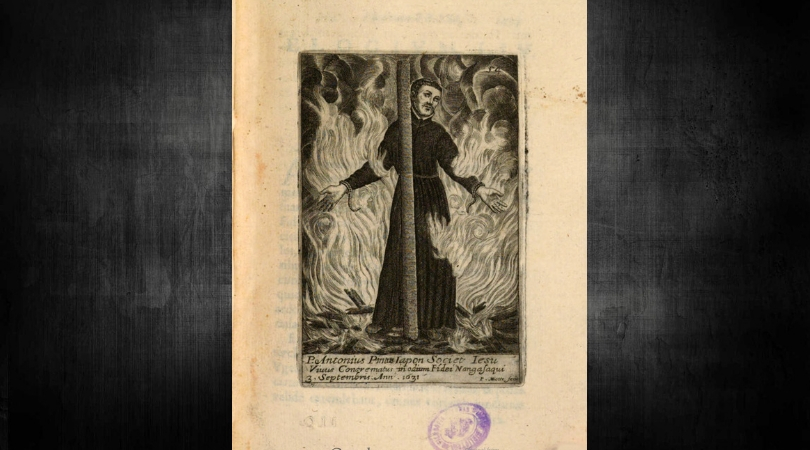 Father Antonio Ishida, S.J. and his fellow priests met their deaths in Nagasaki, faithful to the end

While combing the narrow streets of Nagasaki in the autumn of 1629, the shogun's police grabbed themselves a coveted prize: a Japanese Jesuit priest, an heir of St. Francis Xavier's hope, born 80 years earlier, to fill all Japan with Christ. By 1629, under the shogun Iemitsu's persecution, that hope was all but smashed under the tyrant's heel, and yet a rare breed of intrepid men still clave to that hope as if it were their very life and breath, despising their own mortal lives to save immortal souls for Christ.

Father Antonio Ishida, S.J. had been called to Nagasaki to hear the confession of an ailing believer, and having done this work of charity, he stayed on for six more days to hear a string of confessions from underground Catholics too-long starved of the sacraments. He had been warned against making the dangerous trip to Nagasaki by a fellow priest in Omura, but he had chosen to obey the call "for love of souls," as he later explained in a letter from his Nagasaki prison.

He had been warned against making the dangerous trip to Nagasaki by a fellow priest.

There he languished with four other men: three Augustinians, one Franciscan and a Japanese diocesan priest. Meanwhile, the shogun's governor in Nagasaki, Takenaka Uneme, was busily devising stratagems designed to seduce Christ's shepherds away from His flock — or, that failing, to rip that hated faith out of them by tortures as cruel as fallen man could devise.

But first the seduction. Uneme had Fr. Ishida brought out of jail to face an erudite Buddhist monk chosen to convince him to renounce the Faith, if only for show, in obedience to the shogun. In his secret heart, he could go on believing whatever he wished, the monk explained, and save his life. The staunch priest replied that what a Christian believed in his heart he must proclaim to all the world. And the shogun's decrees, he went on, could in no wise prevail against the law of the Creator of the universe.

Next they tried bribing him with riches and prestige on top of the offer of his life: the browbeating went on for 24 hours — to no avail. The priest went back to jail, and Uneme turned his eyes toward Mount Unzen, a volcano southeast of Nagasaki whose peak held boiling pools of acrid sulfur water, the very stench of which would choke and gag a passerby. But Uneme's victims were not marched up there merely to choke.

The torturers had a practiced method: strip the victim naked, make him stand on a rock at the boiling pool's edge, and shower him with that boiling, sulfurous crud dripped from a ladle with holes in its bottom. A survivor reported that each drop felt like a knife's point driven into the skin. Throughout December of 1631, Fr. Ishida and his fellows endured daily torture as their torturers demanded they apostatize and thus procure relief. At night they were shoved into a hut where they would wait, shivering, through the freezing hours of darkness for their next day of agonies and pray for the grace to go on. For sustenance, each victim was allowed one sardine and one small bowl of broth per day.

Along with Fr. Ishida suffered four priests and one brother: Frs. Bartolomé Gutiérrez, Vicente Carvalho and Francisco de Jesús, Augustinians; and Br. Gabriel de la Magdalena, a Franciscan. Two were Spaniards, one Portuguese and one, Fr. Gutiérrez, was Mexican-born. Along with these clergy, Uneme, the reptilian inquisitor, had thrown in two Portuguese ladies from Macao, Beatriz da Costa and her daughter Maria, perhaps out of gratuitous cruelty. Maria finally collapsed, unconscious, and they said she had apostatized: a claim she denied upon reviving.

Thirty-three days of scalding having gained the torturers no prize, Uneme called them back to Nagasaki. The ladies he sent back to Macao; he would substitute a Japanese priest — Fr. Iyo, Franciscan — to stand in for them on the execution-ground overlooking Nagasaki Bay. The six men were led out of their cell on the morning of September 3, 1632. They would climb a steep slope called Nishi-zaka to reach the place of their martyrdom, the very flatland atop which the crosses of the 26 Martyrs had been arrayed on a February morning in 1597; many more faithful had seeded that soil with their blood in the intervening years.

Atop that sacred ground, Uneme's men had built a cage of sorts in which to roast those stalwarts of the Faith. Around it, on all sides, a palisade of bamboo poles enclosed the killing-ground; inside stood six columns in a line, topped by a roof of foliage and straw: this would trap the acrid smoke intended to prolong the agonies of the missionaries to be burned. Firewood was spaced at a distance from each column calculated to provide a lingering death, and all was doused with saltwater to produce as much choking smoke as possible. Spotting some Portuguese onlookers on the way to Nishi-zaka, Fr. Vicente shouted at them "Long live the Faith of Christ!" in their tongue, and when none made a sound, he asked, "Will no one respond?" and repeated, "Viva!" At this there came a cry of "Viva! Viva!" On their way up the slope, the martyrs chanted Laudate Domimum, omnes gentes.

Long live the Faith of Christ!

Inside their death-cage, each of the martyrs was tied by a single finger to one of the columns: this method was intended to elicit amusing dances of agony and panic from the men of that proscribed faith, and even perhaps provide an apostasy or two. The torturers, though, were disappointed. Father Gutiérrez was the first to die: He stood like a warrior facing an inconsequential enemy, leaned into his column, and gave up his soul in silence. Father Vicente, holding a bronze cross, kept his eyes fixed on it until his last breath. All died without providing any hint of cowardice or doubt of their eternal reward, enduring hell on earth for love of souls.

Friday, September 3, 1632: a day to remember when asking for prayers from above.

Luke O'Hara became a Roman Catholic in Japan. His articles and books about Japan's martyrs can be found at his website, kirishtan.com.