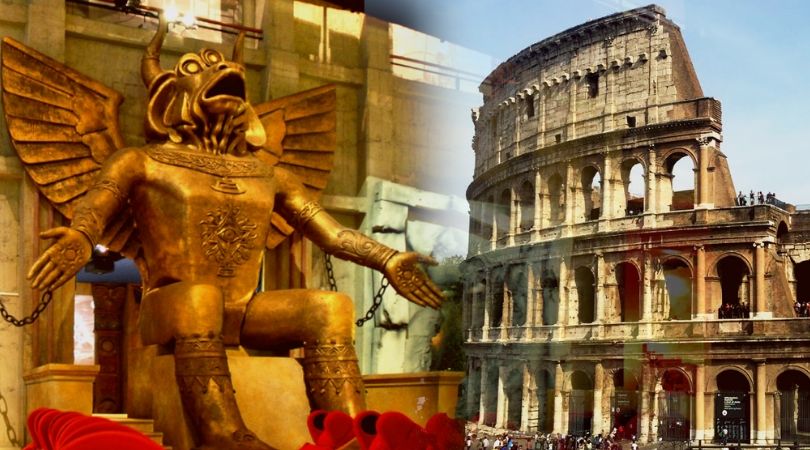 ROME (ChurchMilitant.com) - An exhibition in progress at the Colosseum in Rome features a reconstruction of Moloch, an ancient deity associated in Sacred Scripture and secular sources with child sacrifice, greeting visitors at the entrance.

The exhibition, Carthago. The immortal myth, began Sept. 27 and will end March 29 ― twelve days prior to the traditional papal Via Crucis at the Colosseum for Good Friday, which falls on April 10 next year.

According to Parco archeologico del Colosseo (Parco), the principal organization running the exhibition, the purpose "is to help familiarize the public with the series of historical events that unite the two great powers of the ancient world, Carthage and Rome."

Parco describes the Moloch statue as a reconstruction from a 1914 film: "A reconstruction of the terrible deity Moloch, linked to Phoenician and Carthaginian religions and featured in the 1914 film 'Cabiria' (directed by Giovanni Pastore and written by Gabriele D'Annunzio) will be stationed at the entrance to the Colosseum to welcome visitors to the exhibition."

Church Militant called Parco's information line to verify the presence of the Moloch reconstruction and inquire as to its size, but the person handling the phone had no information and offered another number, which nobody answered.

While some consider a representation of Moloch at the Colosseum entrance a harmless part of the exhibition, others are alarmed by the situation.

LaFedeQuotidiana.it published a letter on Oct. 28 that was addressed "To Priests" that stated:

You must repair for all these abominations!

Today, Oct. 28, near the Colosseum, a place of Christian martyrdom, a statue depicting Moloch was reported to be present, apparently for an exhibition.

For the exhibition, a reconstruction of Moloch ― the terrible divinity linked to Phoenician and Carthaginian cults ― based on the film "Cabiria" was placed at the entrance of the Colosseum.

We Christians are called to repair with supplications and prayers since this pagan god is forbidden by God in the Old Testament!

Please organize prayers of reparation, go to these places with [holy] water and exorcised salt and pray with the imprecatory psalms [the psalms that ask God to bring judgment and curses on one's enemies], exorcism prayers, litanies to the most precious blood of Jesus Christ!

The letter continued by calling on the laity to play its part with prayers and acts of reparation.

Regarding the movie "Cabiria," Leo Lyon Zagami stated that "Gabriele D'Annunzio, a 33rd degree Freemason deeply involved with sexual magick practices contributed to the screenplay, writing all of the intertitles, naming the characters and even the movie itself."

Zagami wondered why this depiction of Moloch is at the Colosseum at this time:

So what is the real reason for placing Moloch inside the Colosseum in Rome in this particular time of the year just before the Christian holy days of All Hallows' Day? The statue will be there until the 29th of March 2020 and will be removed before Pope Francis leads the yearly Via Crucis at Rome's Colosseum.

One commenter on LaFedeQuotidiana.it, Nicolò, views the Moloch representation as harmless, saying that "it's a statue created for the 1914 film 'Cabiria': it's not an idol; it's a statue for cinematographic scenography. Furthermore, it was not placed there for religious content (and has none), but for a cultural exhibition. I don't believe there is a will to offend the Lord."

Parco's website, social media and promotional videos for Carthago have many images of ancient coins, busts and statuettes, but none of them show the Moloch statue to date.