Andrew Jackson and the American Lepanto 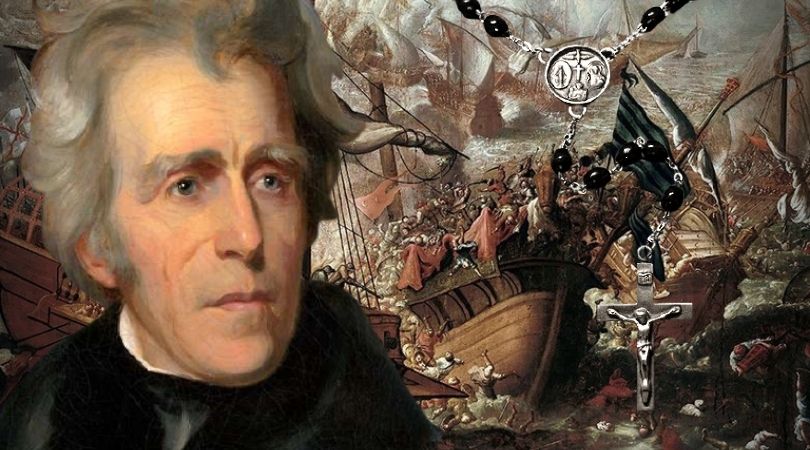 Victory lies in the Rosary

How did the 450th anniversary of the Battle of Lepanto sneak up on me like that? The stunning victory of the Catholic League over the Ottoman Empire merits annual commemoration, but the thrice-over sesquicentennial calls for a parade. Marching bands. Confetti. Silly string. It is a day that saved Western civilization, which could certainly use some saving again — and by the same means. No, not by launching 400 oar-driven wooden vessels at ramming speed towards an invading force. But by taking Rosaries in hand and bending a knee in humility to ask Our Lady's intercession for the grace to prevail in the never-ending battle against evil.

Lepanto had come to my mind this summer as I toured Andrew Jackson's Hermitage outside Nashville. "Well, that's a stretch," I can hear you thinking. Patience. Back in my teaching days, I had done a great deal of reading on Jackson, who was undoubtedly our most colorful president. (This was back then we were allowed to be curious about a slaveholder without being accused of wanting to reinstitute slavery.)

I was intrigued by his boldness, bordering on mania, and the charisma that enabled him to rally supporters around him to press for victories where defeat seemed certain. The Creek Wars, the Florida Campaign (some might call it an invasion, but why quibble?), his dueling, the Bank War — all spoke of enormous courage, rare for his age and in ours practically extinct.

But one story that had escaped my admittedly porous memory came back during a tour of the Jackson mansion. A woman from the deeper South mentioned how, on the eve of the Battle of New Orleans, a convent of Ursuline nuns had offered prayers for victory. The Ursulines had come from France, so they were not well disposed towards the British, who, since the days of Henry VIII, had been hunting priests and decapitating saints.

Word came the next afternoon: After weeks of preparations and probing skirmishes, the small American force facing overwhelming opposition had vanquished the invaders during climactic fighting that had lasted roughly half an hour. Prompt succor indeed! The casualty ratio was miraculous also — 2,459 killed, wounded or missing for the British to 333 for the Americans.

General Jackson's odds of whipping a ragtag force of regulars, freedmen, Indians and pirates into a winning force had been long at best, and he was humble enough to acknowledge another force at play. Though many would blame a series of British tactical errors, most notably the failure of the 44th Regiment under Col. Thomas Mullins to carry fascines and ladders to the front so British soldiers could cross ditches and scale parapets, General Jackson knew whom he had to thank.

As the Ursuline sisters cared for the sick and wounded at their convent, Gen. Jackson paid a visit. Thanking the sisters for their prayers, Jackson conceded, "By the blessing of Heaven, directing the valor of the troops under my command, one of the most brilliant victories in the annals of war was obtained."

It's a tragedy today that if schoolchildren are taught anything about Andrew Jackson, it's that he was responsible for the infamous Trail of Tears. And of course, they get the Howard Zinn version, where White racist oppressors drove thousands of Indians out of Georgia in late fall, forcing them to walk through winter snow for a thousand miles, where most perished on the way. There's no mention of a 20-year process of negotiation leading to a settlement that split the tribe in two. The truth is always more complex and does not serve the purposes of Leftists looking to indoctrinate children into the cult of America hatred.

By the blessing of Heaven, directing the valor of the troops under my command, one of the most brilliant victories in the annals of war was obtained.

As Thurman Wilkins explains in his history, Cherokee Tragedy, the Ridge Family and the Decimation of a People, it was the inability of the Cherokee nation to speak with a unified voice that frustrated efforts to reach an equitable settlement. A minority of the Cherokee nation was satisfied with the terms their representatives had negotiated with the U.S. government in the Treaty of New Echota. That portion left Georgia on time and resettled comfortably without any issues. The majority, however, clung to the unrealistic goals of either retaining their land or getting a larger settlement from the U.S. government.

The leader of the majority, the Cherokee-Scot John Ross, saw a chief as someone who enacted the will of the people. Rather than persuade his tribe to accept the best offer they were going to get, Ross let the mob dictate to him. He listened to the siren song of anti-Jacksonites in Congress, notably Old Hickory's rival for the presidency, John Quincy Adams, who cynically used the Cherokee issue to tar the president. Overestimating his support in Congress and underestimating Jackson's resolve, Ross backed his people into a corner, where they waited for an 11th-hour reprieve from expulsion that never came. Ironically, Ross became known as "the Moses" of his people, and Jackson now bears the weight of historical opprobrium.

As our tour of the Jackson mansion arrived at his chamber, I viewed the bed on which he had died. I recalled an anecdote I'd read in The Raven, an excellent biography of Sam Houston by Marquis James. A protégé of Jackson, Houston had likewise been an Indian-fighter, a general and the president of a republic. Having heard that his mentor was on his deathbed, Houston traveled hundreds of miles on horseback to the Hermitage with his son, who was only about 2 years old. Having made his farewell to the old man, Houston held up his son and whispered, "Please, try very hard to remember that once you gazed on the face of Andrew Jackson."

Being an American means loving your country ferociously for its virtues, even if its sins make you angry at the same time.

I told that story to my students and added that when studying American history, we all have to be willing to look into the face of Jackson, seeing with clarity the good and bad.

Being an American means loving your country ferociously for its virtues, even if its sins make you angry at the same time. Being a Catholic American means reconciling those two feelings humbly through prayers, which we can have every confidence will be answered.

Kevin Rush is a Catholic layman, a former Catholic grammar and high school teacher and the author of two Catholic novels — Earthquake Weather: a novel for Catholic teens and The Lance and the Veil: An Adventure in the Time of Christ. His third Catholic novel, a romantic comedy called The Wedding Routine, is being prepared for publication.
--- Campaign 32075 --- 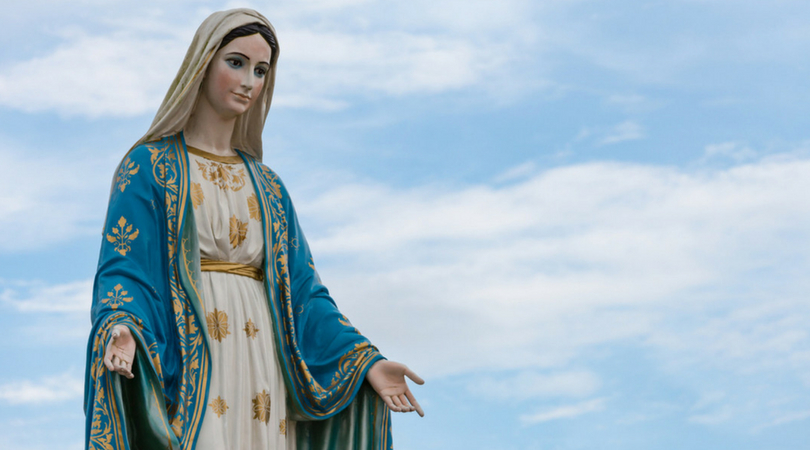