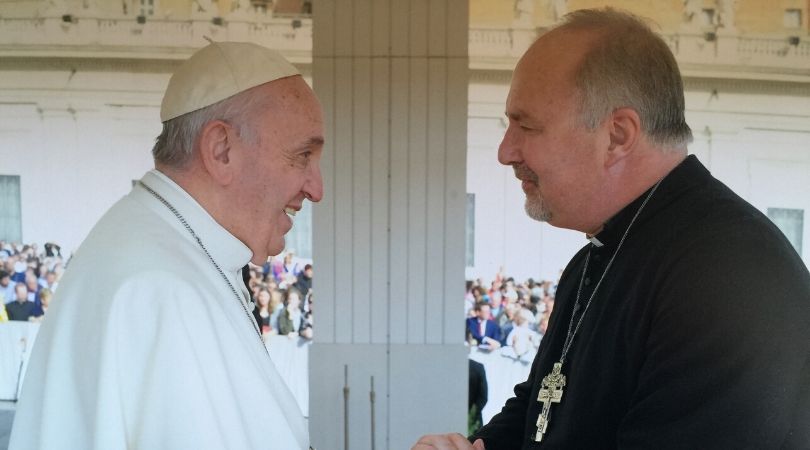 Dr. Gavin Ashenden makes the leap from Canterbury to Rome

SHROPSHIRE, ENGLAND (ChurchMilitant.com) - An internationally renowned Anglican bishop and former chaplain to Her Majesty Queen Elizabeth II is leaving the Anglican Church to become a Catholic.

Bishop Gavin Ashenden will be received into full communion by Shrewsbury's Bp. Mark Davies on the fourth Sunday of Advent at Shrewsbury Cathedral, England.

The outspoken prelate became a global media celebrity after he objected to the reading of the Koran at St. Mary's Episcopal Cathedral in Glasgow, Scotland.

The Koranic chapter on Mary, read from the lectern at the service of Holy Communion, on the Feast of the Epiphany 2017, explicitly denied the divinity of Jesus.

Under pressure from Buckingham Palace, Dr. Ashenden resigned his royal chaplaincy in order to be free to challenge the rising tide of apostasy in the Church of England.

Later that year, Ashenden was consecrated a missionary bishop to the United Kingdom and Europe by the Christian Episcopal Church to provide episcopal cover to traditionalist Anglicans leaving the Church of England.

It has been a special joy to accompany Gavin Ashenden in the final steps of a long journey to be at home in the Catholic Church.

Bishop Davies told Church Militant it was "very humbling to be able to receive a bishop of the Anglican tradition into Full Communion in the year of the canonization of Saint John Henry Newman."

It has been a special joy to accompany Gavin Ashenden in the final steps of a long journey to be at home in the Catholic Church. I am concious of the witness which Ashenden has given in the public square to the historic faith and values on which our society has been built. I pray that this witness will continue to be an encouragement to many.

Ashenden explained to Church Militant that for some time he believed he had "the advantage of working out his faith in a broad church as an Anglican," until Anglicanism capitulated "to the increasingly intense and non-negotiaible demands of a secular culture."

"I watched as the Church of England suffered a collapse of inner integrity as it swallowed wholesale secular society's descent into a post-Christian culture," he noted.

Ashenden testified he was "especially grateful for the example and prayers of St. John Henry Newman," who "did his best to remain a faithful Anglican and renew his Mother Church with the vigor and integrity of the Catholic tradition," adding:

Now, as then, however, his experience informs ours that the Church of England is rooted in the values of secularized culture rather than the bedrock of biblical, apostolic and patristic tradition. Newman's experience charts the way to our proper ecclesial home which is built on the Petrine charism in our struggle for salvation and Heaven.

A commentator for various media outlets, including the BBC, Ashenden revealed three major truths that led him to Catholicism.

2017 video of Dr. Gavin Ashenden explaining why he left the Church of England

The first was an examination of the encounter between the children and our Lady at Garabandal in 1963.

"Curious and skeptical, I was watching the film with a child psychologist friend who noted that 'whatever was going on with the children it was essentially real, as ecstasy among children could never be faked,'" he said. "From then, I found that Our Lady's apparitions, beginning with Gregory Thaumaturgus in the 3rd century through to Zeitoun in Cairo in 1968 and indeed the present day, deeply compelling."

Ashenden's friendship with Abbé Rene Laurentin, expert on the Marian apparitions, blossomed into a deep dependence on the Rosary.

"Curiously, this was accompanied by an unwanted visitation of metaphysical evil which only the Rosary seemed to overcome," he observed.

The second factor leading to Ashenden's conversion was his discovery of the phenomena of eucharistic miracles.

"The fact that they were unknown amongst those who celebrated the Anglican version of the Eucharist carries obvious implications," he noted. "It is of the greatest relief to belong to the Church where the Mass is truly the Mass."

It is of the greatest relief to belong to the Church where the Mass is truly the Mass.

"Faced with the increasingly lethal assault on the Faith in our day, I found there was no means to draw orthodox Anglicans together in ecclesial unity and so the third reason for my conversion is the Magisterium," Ashenden remarked.

"You can find a different Anglicanism for each day of the week — almost each hour of the day," he said. "I came to realize that only the Catholic Church, with the weight of the Magisterium, had the ecclesial integrity, theological maturity and spiritual potency to defend the Faith, renew society and save souls in the fullness of faith."

Ashenden also shared with Church Militant his deep conviction that the Catholic Church is the only alternative to the tyranny of cultural marxism.

In the early 1980s, as a young Anglican priest, I smuggled everything from bibles to medicines for Orthodox and Catholic Christians across the Iron Curtain. My trips to Prague involved carrying theological books to an underground Catholic seminary which continued despite a ban on ordinations. The underground Catholic Church was the only organized and ideological alterative to totalitarianism there. When the Berlin wall fell in 1989, I thought that was the end of Marxism. I and many others were wrong. Little did I know that my experiences of the underground Catholic Church in Czechoslovakia would act as a catalyst and an example to bring me to my true spiritual home.

Catholic academic, blogger and convert from Anglicanism, Fr. Dwight Longenecker, told Church Militant: "Gavin Ashenden comes to the Catholic Church with a wealth of erudition, experience and talent. As so many before him, he has made a long journey from Evangelical Anglicanism to the fullness of the Christian faith in the Catholic Church."

"In these divisive and troubling times," he continued, "it is encouraging to be reminded that in the midst of the tumultuous seas so many still find refuge in Peter's boat."

Ashenden studied law at Bristol University and theology at the conservative evangelical Oak Hill Theological College in London, and served as a parish priest in the Anglican diocese of Southwark.

Ashenden was a member of the Church of England's General Synod for 20 years and was appointed a Chaplain to the Queen in 2008.

"I am grateful to the bishop of Shrewsbury and the Catholic community in his diocese for the opportunity to mend 500 years of fractured history and be reconciled to the Church that gave birth to my earlier tradition," Ashenden told Church Militant.

Although Anglican orders were declared "absolutely null and utterly void" in 1896 by Pope Leo XIII, the diocese of Shrewsbury has sent Ashenden's episcopal genealogy to the Congregation for the Doctrine of the Faith, as his episcopal consecration is considered to be valid in the line of Catholic apostolic succession, though not licit.

Anglican clergy received by Rome are generally re-ordained to the priesthood. However, the former Anglican bishop of London, Msgr. Graham Leonard, who converted to Catholicism in 1994 after rejecting the Anglican Church's decision to ordain women, was ordained sub conditione (conditionally) owing to there being "prudent doubt" about the invalidity of his previous ordination in the Church of England. 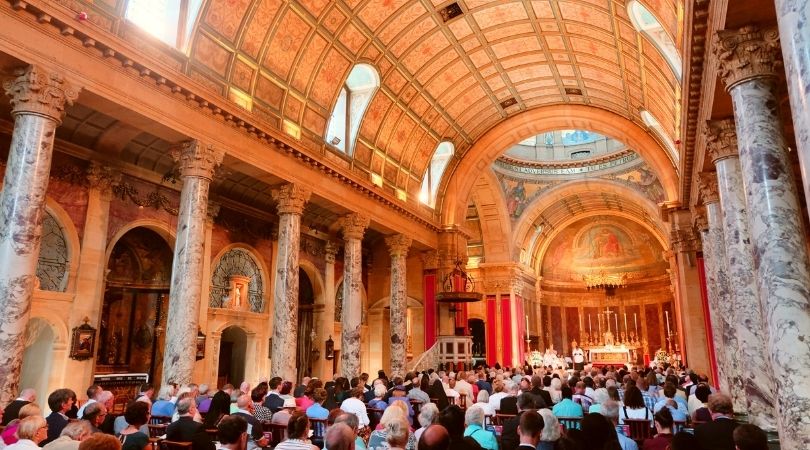