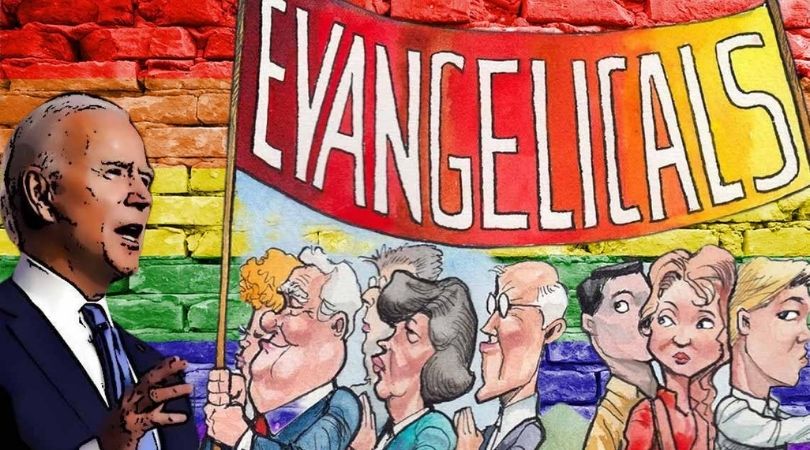 "The leadership of the Evangelical Immigration Table (the Table) celebrates this positive momentum while urging both the Biden administration and the Congress to continue to prioritize much-needed changes to U.S. immigration policy," EIT announced.

National Association of Evangelicals Vice President of Government Relations Galen Carey said he was "thrilled" Biden had made immigration a top priority "by announcing a thoughtful legislative proposal" and executive orders "on his first day in office."

The EIT statement has been endorsed by the Council for Christian Colleges and Universities, Ethics and Religious Liberty Commission of the Southern Baptist Convention, National Association of Evangelicals, National Latino Evangelical Coalition, Wesleyan Church, World Relief, World Vision and other leading evangelical bodies.

Their silence appalls, but also exposes the heart: God will not forget.

The United States Conference of Catholic Bishops (USCCB) and its Migration and Refugee Services have also signed the statement.

American sex historian Lisa Nolland, an evangelical Christian, told Church Militant she was shocked by how top evangelicals had capitulated to an administration that was seeking to impose an anti-biblical agenda on church and society.

"Shame on evangelical leaders for their complicity with mainstream media on Biden's dreadful string of executive orders," said Dr. Nolland, who runs the Marriage, Sex and Culture Group, London.

Nolland, who has been campaigning to protect children from LGBTQ+ indoctrination in schools, lamented:

Evangelical leaders cheer Biden's so-called immigration "reform" but keep silent about his radical transgender rights agenda, codification of Roe v. Wade (abortion up to birth) and tightening of the noose on speech and activities deemed politically incorrect. Their silence appalls, but also exposes the heart: God will not forget.

Instead, evangelical leaders spouted uncritical praise for the "Catholic" president.

Tom Lin, president of InterVarsity Christian Fellowship, said Biden was adhering to the biblical injunction to "not mistreat the foreigner."

Never-Trumpers made a big mistake that will adversely affect the whole body of Christ (not that they will ever admit it).

What "was most important (and theological) about Biden's speech isn't quoting a saint or scripture, but calling people to respect, civility, recover truth, and disagree peacefully," tweeted Harrison, a clergywoman from the Anglican Church in North America (ACNA).

Harrison has been vigorously promoting her new book on Twitter as Biden has issued pro-LGBT and abortion executive orders and policy statements.

"More proof of why never-Trumpers made a big mistake that will adversely affect the whole body of Christ (not that they will ever admit it)," writes New Testament professor Robert Gagnon, citing Biden's latest move pushing the LGBTQ agenda.

"Thanks to never-Trumpers, Biden wasted no time in promoting the transgender- homosexual agenda. Looks like he is going to try to accomplish as much as he can of the 'Equality Act' by executive order," wrote Gagnon, an evangelical voice in the wilderness, who repeatedly warned fellow evangelicals of the dangers of a Biden administration.

Biden has not appointed a single conservative evangelical to his cabinet — touted as "the most racially and ethnically diverse ever." The Catholic-dominated cabinet includes Jews, Hindus, two mainstream Baptists and one Episcopalian.

In December, a handful of evangelical leaders voiced their opposition to Biden's pick for secretary of Health and Human Services, California Attorney General Xavier Becerra, for his "consistent track record of opposing religious liberty and cultural values emerging from religious convictions."

"This is really big. It's of enormous concern. It's hard to imagine anyone that will be more dangerous in the position as secretary of the Department of Health and Human Services than Xavier Becerra," Albert Mohler Jr., president of Southern Baptist Theological Seminary, warned.

Mohler slammed Becerra's "enthusiastic support" of the Equality Act that "would be a steamroller at the expense of religious liberty and the furtherance of the LGBTQ revolution."

Our land is soaked with the blood of the innocent, and it must stop.

The Trump administration had blocked Becerra and the state of California's practice of compelling all health insurance plans and issuers, including churches, to provide abortion coverage.

Critical Clergy: Too Little, Too Late?

Ironically, a number of U.S. Catholic bishops regarded as pro-Democrat have blasted the new president's radical anti-life and anti-women agenda.

The "Biden-Harris Administration is committed to codifying Roe v. Wade and appointing judges that respect foundational precedents like Roe," the president announced on the 48th anniversary of Roe v. Wade.

"It is deeply disturbing and tragic that any president would praise and commit to codifying a Supreme Court ruling that denies unborn children their most basic human and civil right, the right to life under the euphemistic disguise of a health service," Naumann responded.

"Our land is soaked with the blood of the innocent, and it must stop," urged Abp. Salvatore Cordileone of San Francisco, thanking the USCCB in a strongly-worded inauguration statement to Biden, in which the bishops reiterated that abortion is the "preeminent priority" for Catholics.

The Evangelicals for Biden website, which offers a testimony of "Joe's Faith Story," has been silent since Nov. 13, when it posted a story of Pope Francis congratulating Biden.

The Pro-Life Evangelicals for Biden movement, which notes that "Joe Biden's policies are more consistent with the biblically shaped ethic of life than those of Donald Trump," and is supported by evangelical celebrities, has also remained tight-lipped on Biden's anti-biblical policies.