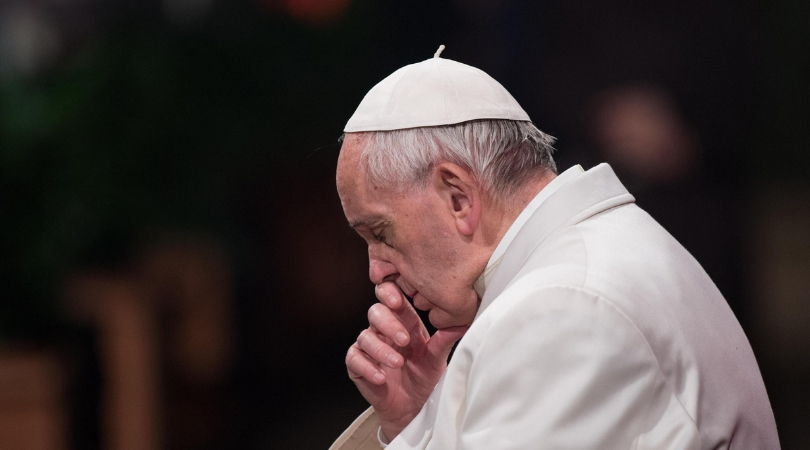 Ambiguity and confusion reign under this pontificate

The revelations made by Eugenio Scalfari about the personal (mis)beliefs of Pope Bergoglio continue. This week he dropped another bomb.

First, the journalist summarized a conversation in his own words:

Whoever has had, as I have several times, the fortune of meeting him and speaking to him with the maximum cultural trust, knows that Pope Francis conceives of the Christ as Jesus of Nazareth, man, not God incarnate. Once he has become incarnate, Jesus ceases to be a God and becomes a man up until his death on the cross.

Up to this point, his remarks could be glossed over, attributing this monstrosity to Scalfari's lack of theological formation, his poor memory or some misunderstanding.

Such a statement is totally incompatible with Catholicism.

But then the founder of La Repubblica reported a direct quotation, attributing precise (and explosive) words to Bergoglio himself. Referring to certain episodes of the Gospel, the pope supposedly said to Scalfari: "They are the proven proof that Jesus of Nazareth, once he became man, was simply a man of exceptional virtue, he was not quite a God."

Such a statement is totally incompatible with Catholicism: Whoever says this not only cannot be pope, but cannot even say he is Catholic. He is outside the Church.

So there are two possibilities. If it's true, Bergoglio should simply go. And if the phrase attributed to him is not true, then because of its gravity and its being in quotation marks and being attributed to him by one of the most famous journalists in all of Italy in the most widely sold newspaper in the country, the Vatican has the duty to clearly deny it, admonishing Scalfari that he is not to attribute false and heretical statements to the pope anymore.

Instead, once again in the Vatican they are playing clever games. The director of the Holy See Press Office pulled out smoke and mirrors, saying:

[T]he words that Dr. Eugenio Scalfari attributes in quotation marks to the Holy Father during talks with him cannot be considered a faithful account of what was actually said but represent a personal and free interpretation of what he heard, as appears completely evident from what is written today regarding the divinity of Jesus Christ.

But how can the denial of Christ's divinity attributed to the pope in quotation marks be a "free interpretation"? Is it possible to "freely" attribute a heresy to a pope with a quotation that is not true? If someone interviewed the Italian Head of State and falsely claimed that he issued a declaration of war against France, would the Quirinale merely say that this quotation was "a personal and free interpretation" of the interviewer? No. It would categorically deny it.

More than a billion Catholics have the sacrosanct right to have either a clear denial or else to know that at the helm of the Church there is a captain who does not profess (anymore) the Catholic faith.

Instead, the shepherd does not care about the flock. Since 2013 there have been so many disturbing outrages, and any of the faithful who have expressed disagreement have simply been insulted. No pope has ever been like this.

There have been so many disturbing outrages, and any of the faithful who have expressed disagreement have been insulted.

A world-renowned theologian like Fr. Thomas Weinandy, formerly a member of the International Theological Commission, wrote this week at The Catholic Thing: "The Church, in her long history, has never been confronted with the situation like the one in which she now finds herself."

What the Church will end up with, then, is a pope who is the pope of the Catholic Church and, simultaneously, the de facto leader, for all practical purposes, of a schismatic church.  Because he is the head of both, the appearance of one church remains, while in fact there are two.

The theologian describes the situation as

"internal papal schism," for the pope, even as pope, will effectively be the leader of a segment of the Church that through its doctrine, moral teaching, and ecclesial structure, is for all practical purposes schismatic. This is the real schism that is in our midst and must be faced.

According to the Capuchin theologian, Bergoglio "sees the schismatic element as the new 'paradigm' for the future Church. Thus, in fear and trembling, we need to pray that Jesus, as the head of His body, the Church, will deliver us from this trial."

In the present Church, Bergoglio is experienced as a scourge.

Republished with permission. The original article appeared in Libero on Oct. 11, 2019.