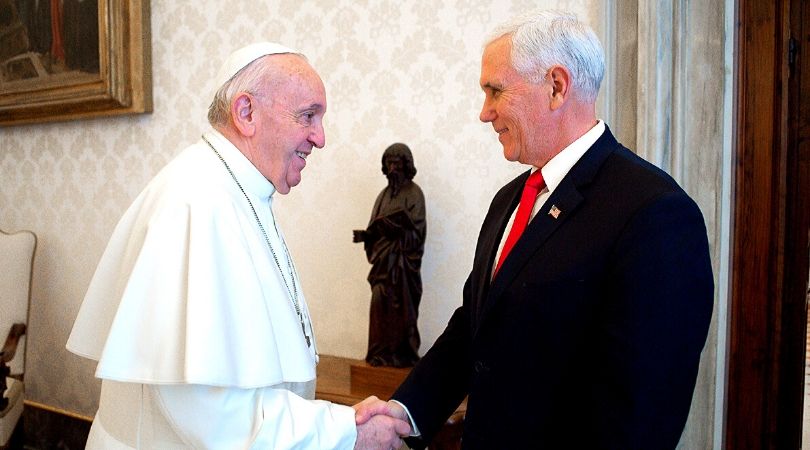 Pro-China drift destabilizing the Church, Italy and the West

China is (dangerously) close, not only because of the terrible coronavirus that is causing alarm throughout the world, but also because China represents a planetary threat from both the economic and political point of view.

In fact, it was primarily the topic of China that brought American Vice President Mike Pence to Rome in the past few days to meet with Pope Bergoglio and also with Italian Prime Minister Giuseppe Conte and Italian President Sergio Mattarella.

These meetings closely follow the visit of U.S. Secretary of State Mike Pompeo to Rome last October. What is the meaning of these two trips to Rome in close succession from the highest officials of the U.S. government?

It is evident that the White House is aware that right now Rome represents a dangerous unknown factor in the global confrontation between the USA and China. Seen from overseas, both the Vatican and the Italian government must appear wavering, confused and in disarray. Both of them have exposed themselves to Chinese influence, a bit like sorcerers' apprentices.

The Italian government signed the illusory [March 2019] "Silk Road" agreement of economic cooperation with the Chinese government and also approved the provision of 5G telecom services to Chinese providers, despite security concerns expressed by the U.S. government. Meanwhile, Bergoglio has effectively handed control of the Chinese Catholic Church to the Beijing regime. The Argentinian pope has been sending friendly signals to Beijing for some time, and he has also stubbornly refused to say anything in condemnation of the violence of the regime against the protesters in Hong Kong who are asking for freedom.

The Asian colossus is a communist regime that rules in a tyrannical way over 1.5 billion people and is now expanding its geopolitical influence to every continent.

But today China is the world's problem, and the United States certainly cannot downplay its concern over Rome going off the rails on this question. The Asian colossus is, in fact, a communist regime that challenges the United States' primacy as an economic power, rules in a tyrannical way over an empire of 1.5 billion people and is now expanding its geopolitical influence to every continent.

The White House has made clear to the West that the confrontation with China will be the primary problem of the coming decades, and the recent agreement between the U.S. and China on tariffs has certainly not diminished the size of this epochal problem.

As Professor Giulio Sapelli has explained, this is the time when a decisive choice has to be made between the USA and China by both the Italian government as well as the Vatican. But how did they both end up in the middle of this planetary arm-wrestling match?

In the Church, this pro-Chinese 'running off the rails' has been provoked by the ambitions of a South American pope who was installed during the era of Obama and Hillary Clinton.

In the Church, this pro-Chinese "running off the rails" has been provoked by the ambitions of a South American pope who was installed during the era of Obama and Hillary Clinton. He detests Trump and the West, does not care about persecuted Christians and sympathizes with leftist regimes throughout the world.

In the Italian government, this same pro-Chinese tilt is a result of the grave state of crisis of Italian politics, and especially the two governing parties, M5S and PD, both of which have no coherent foreign policy and have placed Italy on the margins even with respect to its relations with Libya.

It is not unusual that historically in this sort of situation there always emerges a fascination with the influence of power, from soft power to the direct undue pressure of the State and the authoritarian culture. The same thing is happening today in this poor ruined situation: The power of China is everywhere more present, hidden, amphibious and pervasive than ever — even in Libya and in the heart of the [Italian] government. It has now reached the point that there is a new, unusual and still-to-be-examined "special" marriage of throne and altar as has never before been seen on Italian shores by us who are the "untouchables" of the Tiber and across the Tiber [translator's note: meaning that the elite leadership of both the Vatican and the Italian government, who historically were almost always at odds with each other, are now acting together in perfect harmony].

A "correction" of this disastrous Italian foreign policy can only happen if the present government collapses and there are new elections: if a center-right government were voted into office it would give Italy a clear pro-Western position.

A "correction" of the Vatican is more difficult because it would require that Bergoglio make a complete reversal of his present policy. Moreover, Vice President Pence spoke to the Argentinian pope about the situation of persecuted Christians and of the enormous "March For Life" that was taking place on the very same day in Washington, where for the first time in history the President of the United States personally participated.

All of these themes were in tune with the pontificates of John Paul II and Benedict XVI. But Bergoglio is still stuck on the Obama agenda: immigrationism, global warming as a catastrophe, and friendly "dialogue" with dictatorial regimes. This is a destabilizing pontificate for the Church, for Italy and for the West.

First published in Libero and at Antonio Socci's blog.