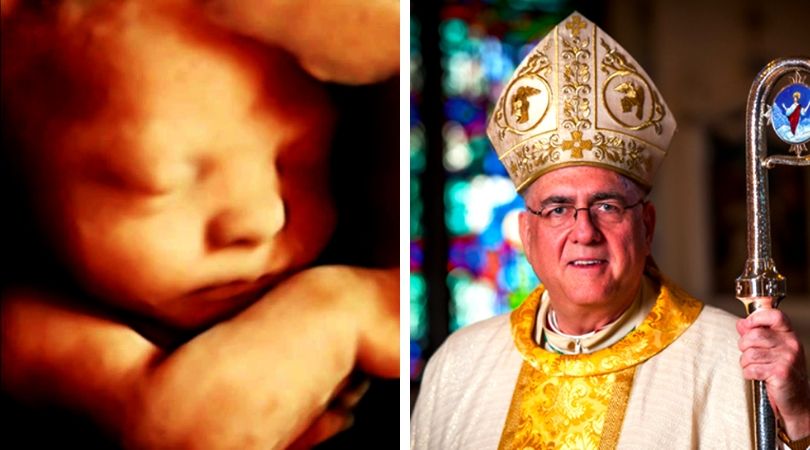 Naumann told a group of pro-life leaders in the diocese that their work is part of the "most important human rights efforts of our time and our age."

Archbishop Naumann of the diocese of Kansas City, Kansas, and chairman of the U.S. Conference of Catholic Bishops' (USCCB) Committee on Pro-Life Activities gave the keynote address on Monday to a conference of diocesan pro-life leaders from 63 dioceses gathered Monday through Wednesday.

The theme of the USCCB-sponsored conference was "Christ, Our Hope," and Naumann's opening address was titled "Life Will Be Victorious," which is also his motto as a bishop (Latin: Vitae Victoria Erit).

Naumann offered his gratitude for serving their dioceses to help "build a culture of life in this particular moment in time when the church is wounded by the clerical sexual abuse scandal; at a time of pro-life promise with the current composition of the US Supreme Court; and a time when supporters of legalized abortion are incredibly motivated and energized."

He noted that our culture and society is facing a moment of great peril but that the moment is also one of great opportunity.

Naumann spoke about how atheism and paganism have been on the rise while the Faith has been on the decline, reminding the pro-life leaders of Catholic teaching.

"There is a God. But not just that there's a God, but to know of a God of revelation, of a God that has pursued us, that sent his son into the world to share our humanity so that we could share in his life," he said. "That is the privilege of all of us as Catholics, but especially as Catholic leaders, to share with our world."

Naumann addressed the clerical sex abuse crisis and talked about how the scandal has affected the Church's moral voice.

"It cannot be denied that it [the clerical sex abuse scandal] has impaired the voice of the church in speaking to our culture about the great moral evils of our time," he said.

Yet, this impairment does not "absolve us of speaking boldly and strongly at the same time with humility. But, we must continue to teach the truth and speak it with love," added Naumann.

"Many saints were previously great sinners yet we do not venerate them for their sin but the transformation of their lives by God's grace," said Naumann.

Naumann reminded the pro-life leaders that the Magisterium of the Church has the authority to properly interpret the word of God.

"The magisterium is a great gift even though it's entrusted to weak individuals," he said. "But it's through this gift the Holy Spirit remains with the church and keeps us constant in our teachings."

Meanwhile, in the wake of three shooting incidents in the United States, Bp. Fabre of the diocese of Houma-Thibodaux, Louisiana ― who is also listed as a member of the USCCB's Committee on Pro-Life Activities but more known for being the chair of the USCCB's Ad Hoc Committee Against Racism ― spoke about eliminating assault weapons and overcoming racism on Thursday.

Dismissing the notion that racism only pertains to blacks and whites, Fabre said: "I think there are many, many faces to racism, so I think it resonates with the pastoral letter when we say that this evil affects everyone, and all communities are affected by racism."

He was referring to "Open Wide Our Hearts: The Enduring Call to Love - A Pastoral Letter Against Racism," which was developed by the USCCB's Committee on Cultural Diversity in the Church and approved as a formal statement by the full body of bishops at the November 2018 general meeting of the USCCB.

"Therefore, we affirm that participating in or fostering organizations that are built on racist ideology (for instance, neo-Nazi movements and the Ku Klux Klan) is also sinful — they corrupt individuals and corrode communities. None of these organizations have a place in a just society," reads one passage from the pastoral letter against racism.

The document does not reference the nation's largest abortion chain, Planned Parenthood (PP), which was founded by Margaret Sanger largely on racist and eugenic ideology.

In an article published February, Ryan Bomberger of the Radiance Foundation noted an irony between PP using black spokespersons and the organizations racism: "By the way, Planned Parenthood, trotting out black spokespeople for its billion-dollar abortion chain doesn't change its racist DNA any more than hiring female lawyers changes Harvey Weinstein's nature."

Bomberger also noted that "[f]or the past two decades in New York City, more black babies have been aborted than born alive."

In a video of phone calls to PP facilities, Live Action has also demonstrated that PP will accept donations specifically designated for the abortion of black babies.

Fabre was one of the bishops to decry President Trump's remark on Baltimore recently, signing a USCCB statement that Trump's language was "absolutely incompatible with the teaching of Jesus Christ."

There are no records to date of Fabre decrying PP or noting any connection between the nation's largest abortion chain and racism.

"If we have the kind of substantive discussions and encounters that we need to have [regarding racism], headlines that we see today will be a thing of the past," concluded Fabre on Thursday.