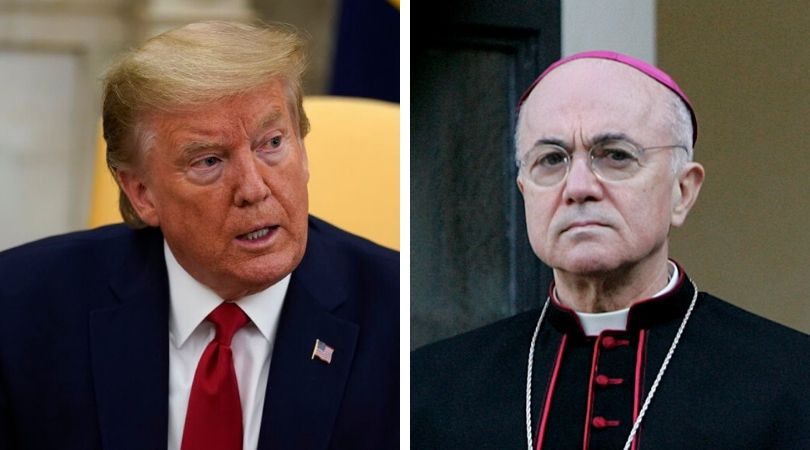 Warns that operatives are 'waging war' against president

Speaking in apocalyptic terms throughout the three-page letter, Viganò commends Trump for fighting "the deep state," which the archbishop aligns with "the children of darkness."

By contrast, he points to the "children of light," who, he says, represent the "most conspicuous part of humanity." Nevertheless, the archbishop notes, the "children of light" are "held hostage" by deep state operatives, who "often hold strategic positions in government, in politics, in the economy and in the media" — and by those who aid the deep state "either out of self-interest or fearfulness."

Viganò makes clear that the children of darkness — "who want to demolish the family and the nation, exploit workers to make themselves unduly wealthy, foment internal divisions and wars, and accumulate power and money" — are "fiercely waging war against" President Trump.

They "have decided to show their cards," he says, referring to their latest attempts to disrupt society and the will of the people, as evidenced by the COVID-19 crisis and the riots that have followed George Floyd's murder, as well as their efforts to block President Trump's re-election in November.

"It is quite clear that the use of street protests is instrumental to the purposes of those who would like to see someone elected in the upcoming presidential elections who embodies the goals of the deep state and who expresses those goals faithfully and with conviction," the archbishops says.

While it may appear "disconcerting," he says, "Just as there is a deep state, there is also a deep Church that betrays its duties and forswears its proper commitments before God."

"There are faithful shepherds who care for the flock of Christ," Viganò elaborates, "but there are also mercenary infidels who seek to scatter the flock and hand the sheep over to be devoured by ravenous wolves. It is not surprising that these mercenaries are allies of the children of darkness and hate the children of light."

Just as there is a deep state, there is also a deep church.

Viganò's warning comes amid news that Washington, D.C.'s Archbishop Wilton Gregory is ordering his priests to dress in black and protest President Trump at 11 a.m. Monday morning in Lafayette Park — a violation of civil rights, as an employer cannot order staff to particpate in a political protest.

As in his May 7 "Appeal for the Church and the World," which warned the world to beware the permanent loss of freedoms in return for adhering to COVID-19 emergency mandates, the archbishop reiterates that the battle between light and dark forces is a spiritual battle.

Viganò predicts that investigations into riots and "acts of vandalism and violence" in both the United States and in Europe following the murder of George Floyd would expose "those who hope to profit from the dissolution of the social order so as to build a world without freedom."

As to the destruction, mayhem and murder ensuing from the riots, he refers to the Masonic adage Solve et Coagula ("dissolve and coagulate" in Latin), which also appears inscribed on the arms of images of the satanic idol Baphomet.