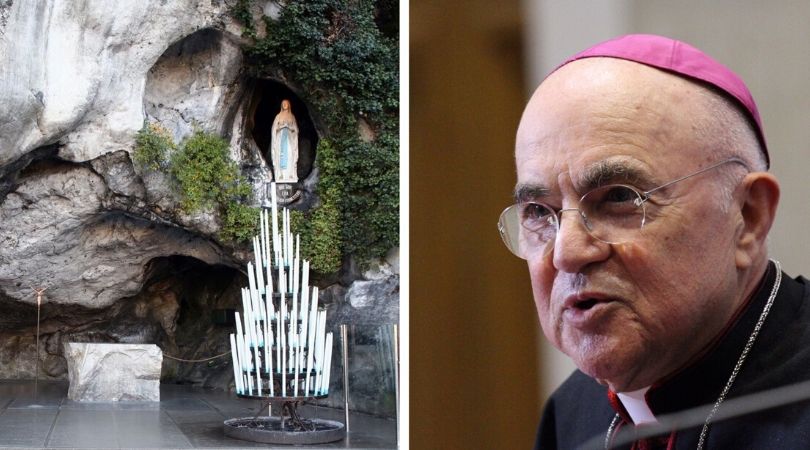 ROME (ChurchMilitant.com) - Archbishop Carlo Maria Viganò and other leading Catholic figures are denouncing the closure of the miraculous pools at the shrine of Lourdes and appealing to the Vatican's apostolic delegate to reopen the baths immediately for pilgrims seeking healing.

"The decision to close all the pools 'as a precaution' and 'until further notice,' as stated by the sanctuary, has disconcerted and aggrieved the Catholic faithful all over the world," the online petition Keep Lourdes Open states.

"Those who deny the miraculous nature of the water of Lourdes, those who fear that the pools of Lourdes may produce contagion, it is they that deny the power of God, deny the promises of Our Lady, deny the meaning of Lourdes," the petition warns.

The petitioners are calling upon Apostolic Delegate for the Sanctuary of Lourdes Bp. Antoine Hérouard and Rector of the Shrine of Our Lady of Lourdes Abp. Olivier Ribadeau Dumas to "cancel the decree closing the pools of Lourdes and to reopen them immediately for pilgrims, who upon immersing themselves in this miraculous water seek healing for the body and above all for the soul."

In a few hours, over 1,000 signatories from Italy and another 2,000 from Germany, Brazil, the United States and other parts of the world have signed the petition, distinguished historian Roberto de Mattei, who launched the petition, told Church Militant.

Professor de Mattei explained that Pope Francis had personally appointed Bp. Antoine Hérouard and created the position of Apostolic Delegate for Lourdes to ensure that the world's most famous healing sanctuary responded better to its mission at all times. "Above all, it proves that the pope wants to be involved with the shrines," Hérouard confirmed earlier in an interview with La Croix.

Closing the healing pools of Lourdes means giving up believing in the miraculous character of Lourdes.

Professor de Mattei emphasized to Church Militant that the closing of Lourdes was "the most paradoxical and contradictory provision adopted by ecclesiastical authorities."

"I can expect an atheist to resort to such an action," he said. "But when two bishops, under the direct supervision of the Holy Father resort to such a measure, it only demonstrates the most remarkable lack of faith because if there is a place that, par excellence, heals bodies and souls, that is precisely Lourdes."

Church Militant quoted words from late 19th-century French novelist Émile Zola book Lourdes and asked Professor de Mattei how he would respond to such a bitter enemy of the Catholic Church who described the water as "a horrible slop" containing "threads of blood, sloughed-off skin, scabs, bits of cloth and bandage, an abominable soup of ills ... the miracle was that anyone emerged alive from this human slime."

"Despite the pathology of pilgrims, often contagious, nobody, in 160 years, has ever been infected," Mattei replied, noting that among the healings Zola witnessed at Lourdes was that of an 18-year-old girl named Marie Lemarchand who was afflicted with three seemingly incurable diseases: an advanced stage of lupus, pulmonary tuberculosis, and leg ulcerations the size of an adult's hand.

Sixteen years later, the girl was still in perfect health and the cure was designated as official, but Zola refused to believe. "I don't want to look at her. To me she is still ugly," replied Zola, walking away.

"If I knew a coronavirus patient, I would advise him to go to Lourdes. And if I were in Lourdes and had a coronavirus patient next to me, I would be sure I would not catch the infection. Lourdes protects more than any mask or disinfectant. Closing the healing pools of Lourdes means giving up believing in the miraculous character of Lourdes," the historian commented.

The shrine's website posted a notice on Feb. 28 stating: "Our first concern will always be the safety and health of the pilgrims and the shrine's working community. As a precaution, the pools have been closed until further notice."

Meanwhile, the Vatican has announced it will postpone the "Economy of Francis" conference to Nov. 21 as a result of travel restrictions imposed by the coronavirus epidemic. The anti-capitalism conference was scheduled to be held in Assisi from March 26–28.

If I knew a coronavirus patient, I would advise him to go to Lourdes.

The Vatican is also trying to end speculation that Pope Francis might have contracted the coronavirus, after nearly a week of the pontiff canceling a number of public engagements.

Francis has never previously canceled so many official audiences or events in his papacy and has never missed the annual spiritual exercises retreat he instituted early in his pontificate. He is, however, meeting people privately at his Casa Santa Marta residence, the Vatican said.