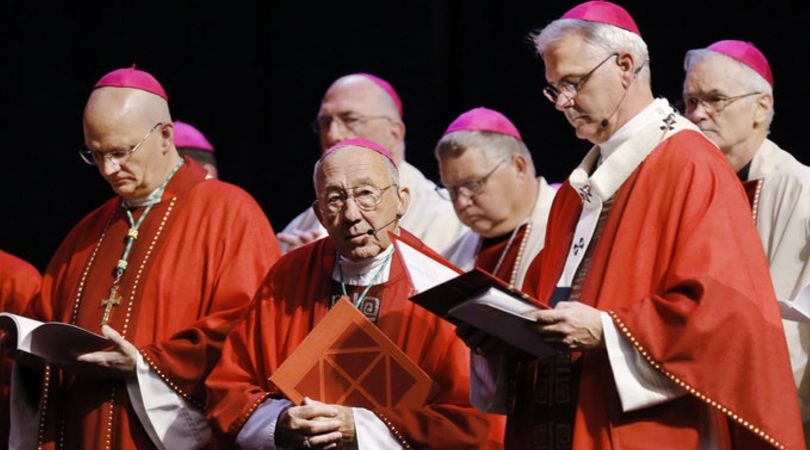 Investigators: 'We found instances in which we believe there was the actual destruction of evidence'

OKLAHOMA CITY (ChurchMilitant.com) - An independent investigation of the archdiocese of Oklahoma City found that the diocese intentionally covered up evidence of sex abuse of minors.

In August 2018, Abp. Paul Coakley of Oklahoma City hired McAfee & Taft law firm to conduct an investigation into the clergy working in the archdiocese.

Based in Oklahoma City, McAfee & Taft has worked for the archdiocese for almost 15 years. Additionally, in January 2018, the archdiocese hired Michael Scaperlanda as the chancellor for the diocese. His son, Christopher Scaperlanda, is a partner at McAfee and Taft.

The long and the short of it is you trusted us, and we failed.

McAfee and Taft said their investigation was independent and that they only accepted the engagement under circumstances that lacked conflicts of interest and assured the independence of the investigation. A statement made to Church Militant reads, in part:

We restricted access so only the investigative team could view the investigations files and the records provided by the Archdiocese. Everyone else at our firm — including the son of the Archdiocese's current chancellor — was not able to access or view investigatory materials, work product or the files produced.

The report— which only covers the time period of 1960–2018 and is not yet complete — appears to validate what victims of sex abuse have been saying for years: that the Catholic Church has been intentionally covering for abusive priests.

In response to the report, Abp. Coakley, archbishop of Oklahoma City since 2011, issued a two-page letter of apology, saying they have made significant progress since the institution of the Charter for the Protection of Children and Young People, but admitting: "The long and the short of it is you trusted us, and we failed."

Similar to the findings with the archdiocese of New York's investigation, they found that there have been no priest abusers working in the archdiocese since 2000. Overall, only 11 out of 545 priests in the archodiocese (2%) were found with substantiated allegations of abuse.

Unlike New York's findings that it is the laity that needs annual training, McAfee and Taft made several recommendations the archdiocese could implement to improve protections for minors.

The first problem McAfee & Taft ran into was the record-keeping process for the archdiocese, which is not formalized, is disorganized and isn't in one centralized location.

They encountered numerous challenges with both paper records and electronic communications and concluded the archdiocese "lacks adequate controls over its own records."

"If records can be manipulated, removed, destroyed, or simply lost due to a deficient record management system, the Archdiocese cannot make decisions with the benefit of full historical knowledge of what has been documented," the report states.

The firm also learned that it was the practice of the archdiocese to permanently purge all deleted emails after 30 days.

Even the Review Board's records were scattered. A significant amount had to be retrieved from the home of the former archdiocesan chancellor Loutitia Eason.

Eason worked for the archdiocese from 2002–2017 and apparently took a large number of files when she retired. Her husband, Doug Eason, was a lawyer for the archdicocese from 1999–2018.

Loutitia passed away in January 2018, and several attempts have been made since April 2018 to retrieve the files. In September, McAfee & Taft received 12 boxes of personnel files from the Eason home, and in October, another law firm for the archdiocese received 37 boxes. They believe there are still more files in the Eason home.

In a stunning admission, McAfee & Taft stated, "We found instances in which we believe there was the actual destruction of evidence, an intent to destroy evidence or a failure to record or document evidence relating to allegations of sexual abuse of minors."

In another admission, the report claimed the archdiocese "has inconsistently and inadequately investigated allegations of sexual abuse of minors in the past."

They found glaring inconsistencies in the way the archdiocese handled allegations of sexual abuse of minors.

Despite the archdiocese's claims that the process "evolved" over time, McAfee & Taft "found that there was little to suggest that more experience in handling these allegations necessarily resulted in a more consistent or thorough investigation."

We believe there was the actual destruction of evidence, an intent to destroy evidence or a failure to record or document evidence.

The report also claimed the archdiocese "lacked expertise to conduct its own investigations."

"We identified numerous times when the priests being interviewed would provide information that seemed relevant to the investigation, yet the three-member panel would simply move to the next question in the outline, rather than ask follow-up questions to obtain additional information," the report stated.

The archdiocese failed to act appropriately when presented with credible allegations, act on "warning signs" and failed to monitor priests placed on restricted ministry.

When approached, Abp. Eusebius Beltran, former ordinary of Oklahoma City, and Bp. Joseph Weisneberger, former vicar general, both cautioned the law firm against applying today's standards of zero tolerance to historical abuses, since for decades prior, there was a widespread belief that pedophilia could be "managed."

"I believe we followed appropriate protocols of the time," Abp. Beltran told McAfee & Taft. "To judge our actions from 20 or 30 years ago according to present protocols is not fair."

McAfee & Taft disagreed with the bishops and stands by its assertion that the archdiocese failed to take appropriate actions to prevent abuse. The firm based its assertion on the widespread understanding, dating back to the 1990s, of how devastating child sex abuse is.

The report detailed five instances where the archdiocese was aware of "warning signs" or "credible evidence" of sex abuse of minors and failed to act. Other problems noted in the report are a failure to:

In one case, in direct violation of that policy, the archdiocese paid for an accused priest's defamation lawsuit against the victim.

Not only did that action go against the policy of avoiding traumatizing the victim, the report also noted that "the defamation suit 'complicate[d] the investigation' of the allegation, by foiling the Review Board's efforts to interview the alleged victim."

Overall the investigation made 11 recommendations to the archdiocese, including better record keeping, referring abuse claims to police, hiring an independent investigator to look into abuse allegations and disciplining staff who withhold information on abuse, among other things.

Additional investigative work is ongoing. McAfee & Taft will be reviewing the information contained in the 37 boxes provided by Doug Eason the day before the report was published. The archdiocese's statement noted they are also investigating priests who worked in the diocese prior to 1960.

10/8/2019: This story has been updated to reflect McAfee & Taft's statement on the apparant conflict of interest.

Watch
The Bishops Are the Problem
By Church Militant   •   0
Watch
Albany a Predator’s Playground Under Bp. Howard Hubbard
By Stephen Wynne   •   0