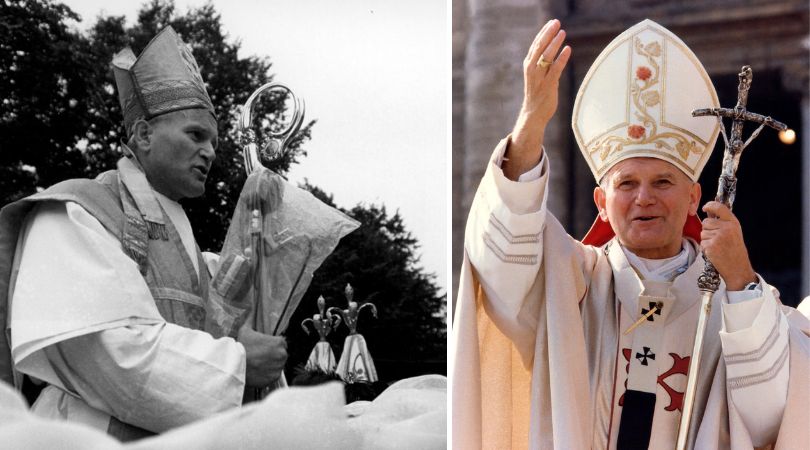 Even after abuser priests were sentenced to prison, Wojtyła allowed them to continue working in another diocese after release, as in the case of Fr. Surgent, who worked in two other dioceses after leaving prison.

Church Militant has obtained a translation of Wojtyła's letter (see picture) "lifting the suspension" imposed on another priest, Fr. Józef Loranc. The letter stated that Loranc was being transferred to Holy Family parish in Zakopane — after he was sentenced to two years in prison for sex crimes and released conditionally after serving half of his sentence.

Loranc served in the archdiocese of Kraków until his death in 1992. While teaching catechism at a parish, he "chose the prettiest girls from grades 1 to 5" and compelled them to perform oral sex on him while playing hide-n-seek, covering the child with his cassock or coat.

They were in a great hurry to canonize John Paul II.

Wojtyła withdrew only "the canonical mission to catechize children and youth" from Fr. Loranc after reinstating him, according to the then-archbishop's letter of Sept. 27, 1971. The letter survived only because it was intercepted and copied by the secret police and later preserved in the national archives.

"I found concrete cases of priests who abused children in the archdiocese of Kraków where the future pope was archbishop," Overbeek told Dutch media Nieuwsuur on Saturday. "Even convicted perpetrators were allowed to continue working in other dioceses."

"The future pope knew about it and nevertheless transferred those men. That led to new victims," Overbeek said. The explosive findings will be published in the Polish book Maxima Culpa in early 2023. Wojtyła served as archbishop of Kraków from 1964 to 1978.

Even though documents directly concerning Abp. Wojtyła's handling of sex abuse cases have "almost all been destroyed," the archbishop "is mentioned very often in other documents that have survived," the journalist explained.

"And if you put them all together, they are puzzle pieces that form the picture of how he handled that child abuse by priests," Overbeek maintained.

Cultural anthropologist and former Jesuit Dr. Stanisław Obirek, currently a humanities professor at the University of Warsaw, told Church Militant that he had seen and confirmed the documentary evidence as "authentic."

Obirek, known for his work on Jesuits in Poland and Lithuania from 1564 to 1668, explained that the archives are maintained by the Instytut Pamięci Narodowej (Institute of National Remembrance) and "largely used as an authentic material for Polish history in the communist period."

Church Militant asked Obirek why the documents recently discovered were not taken into consideration during the beatification and canonization procedures for Pope John Paul II.

"As far as I know, many materials were not used when Pope John Paul II was being considered for sainthood. It was simply impossible, given the tempo of the canonization process," Professor Obirek replied.

"They were in a great hurry to canonize John Paul II. And now, you see facts emerging from those Polish archives that are very incriminating and can, therefore, actually cast doubt on his sainthood," the professor told Nieuwsuur.

"This kind of material, the same sources, are still used in Polish politics today. Nobody rejects this kind of evidence," Obirek added.

"We now know that Wojtyła actively covered up pedophile crimes committed by priests under his jurisdiction. That's a new chapter, a first step. We'll see how the Church will react," the professor told Church Militant, reiterating his comments to Nieuwsuur.

The future pope knew about it and nevertheless transferred those men.

American canon lawyer Fr. Thomas Doyle, who, in 1985, coauthored the confidential 95-page report "The Problem of Sexual Molestation by Roman Catholic Clergy," noted that the revelations would "turn the previous image of Pope John Paul II upside down."

"What I read is explosive," Doyle told Nieuwsuur. "He wasn't part of the solution; he was part of the problem. He didn't do anything."

Polish bishops have refused to comment on the reports. When asked for his response, Pawel Rytel-Andrianik, the director of foreign communications at the Polish bishops' conference, told a Catholic media agency that "it's not my responsibility."

However, immediately after they were contacted for comment by Nieuwsuur, the conference released a defense of the Polish pontiff, claiming that it was a media "fashion" to "undermine the authority of John Paul II, and even to question his sanctity, confirmed in the process of beatification and canonization."

The bishops' statement, published on Nov. 14, offered a seven-point apologia for John Paul II's "approach to the problem of sexual abuse of minors," including a punishment for expelling predator priests laid down in the Polish pope's 1983 Code of Canon Law.

In 2001, John Paul II issued the document Sacramentorum Sanctitatis Tutela, which considers sexual harm done to a child as one of the gravest ecclesiastical crimes, the statement noted.

John Paul II was being attacked for his teaching in Redemptor Hominis and Veritatis Splendor, as well as for his Theology of the Body teaching, "which does not correspond to contemporary ideologies promoting hedonism, relativism and moral nihilism," the bishops claimed.

The bishops' statement, however, did not address the actions of Wojtyła during his tenure as archbishop of Kraków and limited itself exclusively to defending the actions of John Paul II during the 27 years of his pontificate.

Meanwhile, on Advent Sunday, special communiqués were read out in parishes in the three dioceses of Bielsko-Żywiec, Koszalin-Kołobrzeg and Pelplin, where serial predator Fr. Surgent served. After Wojtyła "pardoned" him, Surgent went on to abuse adolescent males for decades to come.

Seeking to reach out to victims, the announcement acknowledged that even though Fr. Surgent's crimes "were not a secret to the bishops," the security services had "decided that a demoralized clergyman would do the most harm to the Church if he was allowed to run wild."

"The reasoning of the Church — of the defenders of the pope — boils down to the fact that he would not have known. That he understood the seriousness of the situation very late and that he first thought it was America's problem. All those arguments can now be dropped," Overbeek observed.

In 2020, the Vatican released its 460-page report into ex-Cdl. Theodore McCarrick, noting that Pope John Paul II installed McCarrick as archbishop of Washington, D.C., even after receiving warnings about the serial homopredator from Vatican officials and from New York Cdl. John O’Connor in 1999.

The McCarrick report suggests that Wojtyła's experience with the secret police in communist Poland may have convinced him that allegations of clerical sex abuse were aimed at damaging the Catholic Church.

Following the Vatican's report, Catholic author Dawn Eden Goldstein tweeted, "A weird thing about being Catholic is that today's report doesn't change my belief that Pope John Paul II has infallibly been declared a saint. It does, however, change the way I ask his intercession."

Addressing a press conference in 2014 on the reasons for canonizing the Polish pope, Msgr. Sławomir Oder, a Polish priest and the postulator for the cause of Wojtyła's sainthood, indicated that Vatican officials do not have a clear response to questions about John Paul II's relationship with serial sex abuser Fr. Marcial Maciel Degollado.

Despite extensive reporting on Maciel's abuse as early as 1997, the founder of the Legionaries of Christ was not publicly punished until 2006. After John Paul II's death, Pope Benedict XVI ordered Maciel to a life of penance.