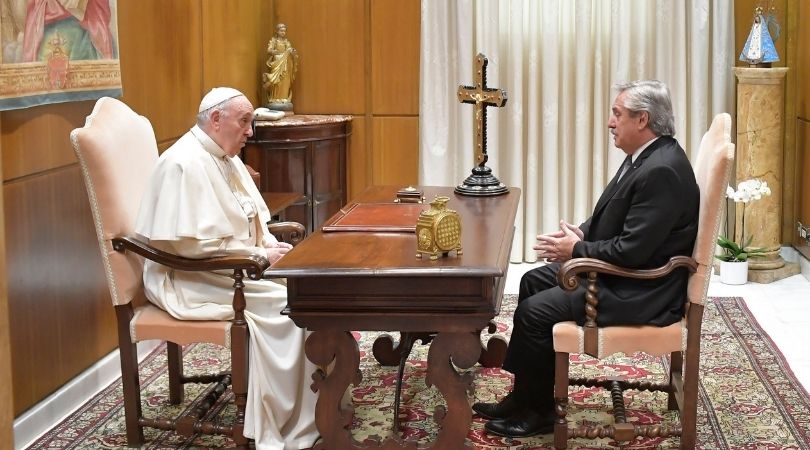 The Vatican did not disclose contents of the 35-minute private audience between the pope and president but revealed that Fernández and the Vatican secretary of state and foreign minister talked about the pandemic, Argentina's debt and the Church's war on poverty.

"It was a very nice meeting; I hadn't seen him for a while, so finding him again was very pleasant for me," Fernández told reporters. "We talk about problems that afflict the world and Argentina. As always he was greatly predisposed to helping us."

Fernández is on a tour of Europe, garnering support from Portugal, Spain and France in the debt-renegotiation process with the International Monetary Fund (IMF) and the Paris Club.

"I told the pope what we were doing, how we were progressing in the negotiations and, as he always does, he expressed his idea to me to support us in whatever way he can support us," the president said.

Francis is working his magic from Rome to keep the Peronists in power.

Speaking to Church Militant, former American diplomat Martin Barillas explained how the "Peronist government of Argentina expects native-son Pope Francis to work a miracle as the country renegotiates its debt with foreign creditors."

"Last year, just before the Vatican conference on Third World debt, Fernández told the world that Francis promised to help in reducing the interest Argentina is expected to pay on over $100 billion in sovereign debt," said Barillas, a commentator on Argentinian affairs.

"Argentine economy minister Martín Guzmán met the pontiff again in April and said that Francis continues to be a big help," Barillas observed, noting that "Francis is working his magic from Rome to keep the Peronists in power."

Barillas, who was assigned to the U.S. embassy in Argentina, elaborated:

Images take precedence in politics: Photos of the two men meeting would confirm that all is well between the Vatican and the Argentine government. This is despite the Peronists' radical abortion law and homosexualist agenda in schools. Catholics in Argentina feel not only ashamed by this pontificate, but also battered and dispirited.

Sources also told Church Militant that Francis and Fernández were "ideological bedfellows," and that "even though they may not be friends, the pope has great esteem for Guzmán since he comes highly recommended by his mentor, left-wing economist Joseph Stiglitz."

Stiglitz is economic advisor to the Pontifical Academy of Social Sciences and was hailed by Foreign Policy journal as "an icon of the Left." The socialist academic shares Francis' goal of an "inclusive capitalism" and the pontiff's support for a "new world economic order."

Catholics in Argentina feel not only ashamed by this pontificate but also battered and dispirited.

Argentinian media said that Francis and Fernández would discuss the waiver of vaccine patents so that "all citizens of the world" could receive the experimental jab.

Pfizer, a pharmaceutical giant promoted by Pope Francis both through the Vatican's use of the company's abortion-tainted jab and the Vatican's invitation to Pfizer CEO Albert Bourla to address the Vatican's global health conference, reportedly bullied Argentina in vaccine negotiations.

According to a report by the Bureau of Investigative Journalism, Argentinian officials said Pfizer's negotiators demanded additional indemnity against any civil claims citizens might file if they experienced adverse effects after being inoculated.

In Argentina and Brazil, Pfizer asked for sovereign assets to be put up as collateral for any future legal costs, the report revealed, labeling Pfizer's demands as "high-level bullying" and claiming Argentina was being "held to ransom" in order to access life-saving vaccines.

Ginés González Garcia, Argentina's former minister of health, blasted Pfizer for "misbehaving with Argentina," adding, "The company's intolerance with us was tremendous."

The Vatican has never addressed the issue of Pfizer's dealings with Latin American countries, even though Francis has repeatedly stressed the need for "vaccine justice."

Francis also maintained silence after Argentina passed its 2020 law permitting the killing of unborn babies (just hours after the Feast of the Holy Innocents).

Legal abortion in Argentina was the work of Bergoglio's friends.

The new law establishes "voluntary pregnancy interruption" as a right at any time during the first 14 weeks of growth, but largely allows the practice through all nine months of pregnancy if the "comprehensive health of the gestating person" is at stake.

Notably, "70% of the Peronist deputies and 68% of the Peronist senators voted for the bill. ... In other words, legal abortion in Argentina was the work of Bergoglio's friends," remarked Argentine writer Rubén Peretó Rivas.

"The centrist party, the very same that Pope Francis has continually disparaged and for which he has a profound class resentment, amply voted against the law in both chambers," Rivas pointed out.

At the end of the meeting, the Argentine duo exchanged gifts at Paul VI Hall, a few meters from Casa Santa Marta — Francis' residence.

Francis gave Fernández a mosaic of a human couple responding to God's invitation in Genesis to care for the earth. The mosaic bears an inscribed text: "May the fruit of the earth and work of man become for us the food of eternal life." The pope also presented the president with his encyclical Fratelli Tutti and the 2021 World Message of Peace.

In turn, Fernández gave Francis organic honey and kitchen products made by youth recovered from addictions, a stole from the Basilica of San José de Flores along with a replica statue of San José in the basilica, a picture of Luján city, Dante's Divine Comedy and a biography of Argentinian musician Enrique Santos Discépolo.

The Vatican asked the president's entourage to remove their masks and drop social distancing for a photo opportunity with the pontiff at the end of the meeting. 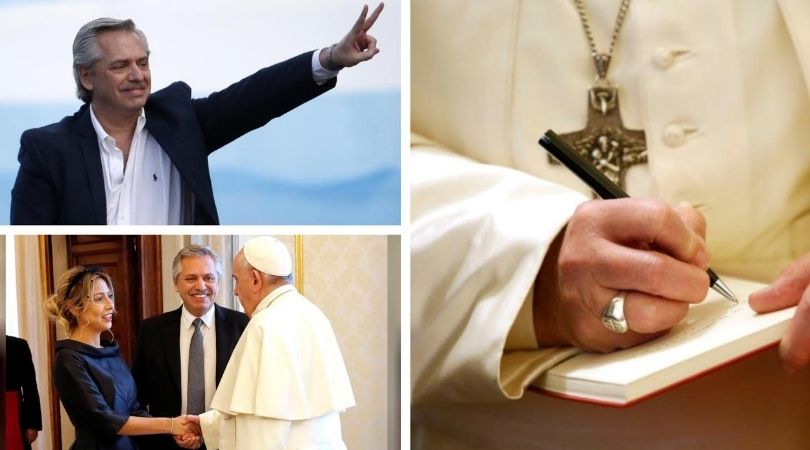 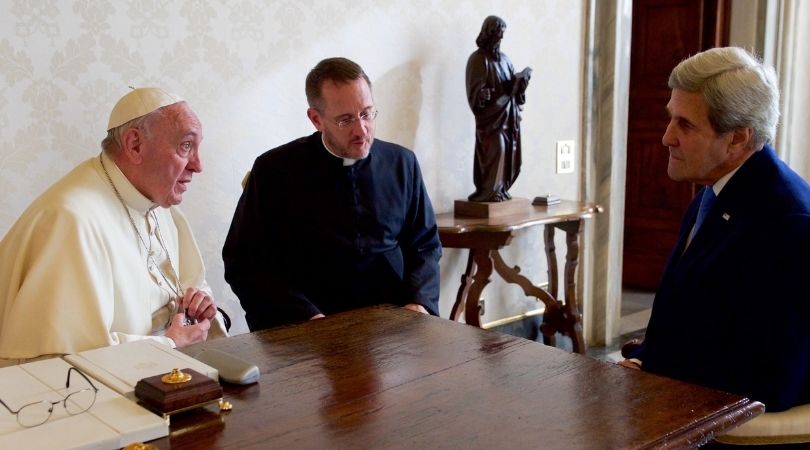 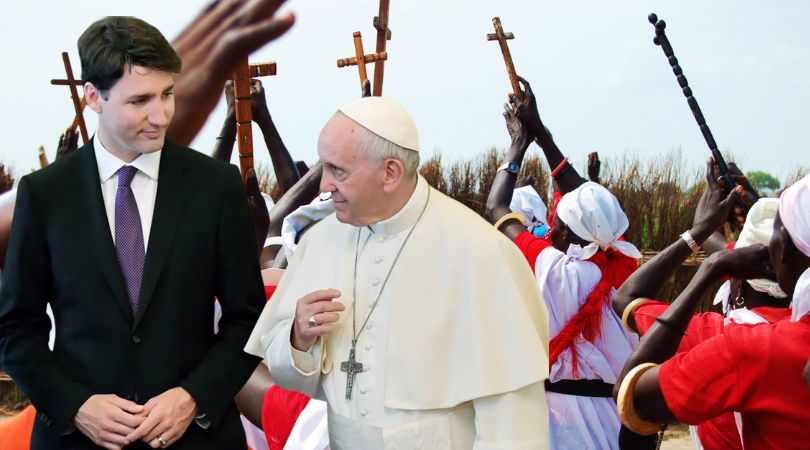