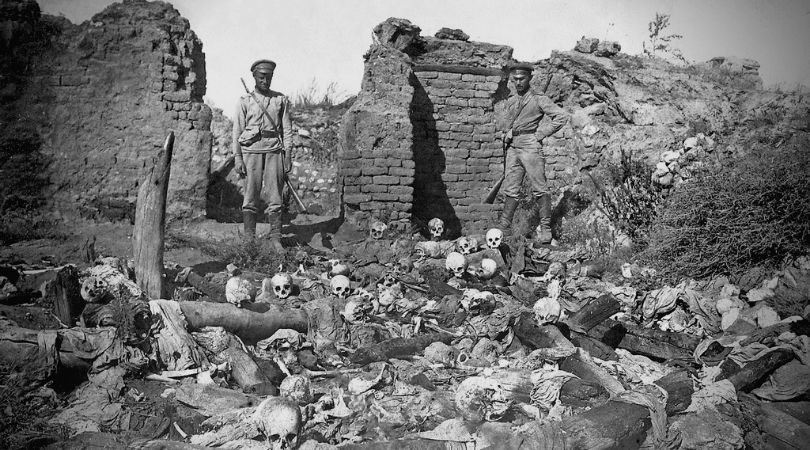 Genocide is defined as "the deliberate killing of a large number of people from a particular nation or ethnic group with the aim of destroying that nation or group." This deliberate killing is most well-known as the Holocaust, which is estimated to have exterminated around two-thirds of the Jewish population of Europe.

The Nazi's ended up killing many millions of mainly Christians and Jews based solely on what they believed. Nazi Germany deliberately killed a large number of people from each particular ethnic group (or religion) with the aim of destroying those groups.

While this genocide is widely recognized around the world and even by Germany itself, other genocides of similar degree are not.

The best example of this would be the Armenian Genocide. From 1915–1917, there was an estimated 1 million-plus Armenians killed by the Ottoman Turks during World War I. This was the first genocide of the 20th century.

In the year 301, Tiridates III, the King of Armenia, proclaimed Christianity as the state religion. This made the Armenian kingdom the first state to embrace Christianity officially.

Armenia has always been a Christian nation, and today, 97% of Armenians identify as Christian. The Ottoman Empire, on the other hand, was an Islamic State that controlled much of Southeastern Europe, Western Asia and Northern Africa from the 14th–20th centuries.

The Ottoman Empire started modernizing and also declining in the middle of the 19th century. Constitutional reforms were made, and secular law started replacing religious law. This reform hit its peak when a group of young Ottomans, led by Midhat Pasha, put together the Ottoman Constitution of 1876. This Constitution favored the State over the sultan, who at the time was Abdul Hamid II. The Constitution only lasted two years — but as the Young Ottomans' revolution, known as the Young Turk Revolution, gained traction, in 1908 the sultan was forced to restore the 1876 Constitution. This took power away from the sultan and gave more power to the State.

The Committee of Union and Progress, or the CUP, was the political party aligned with the Young Turks. The philosophy of the CUP was one of Turkish nationalism, which played an essential role in the Armenian Genocide. This philosophy can be summed up in the words of Enver Pasha, a key leader in the Young Turk revolution.

"I am prepared to gladly sacrifice the remaining years of my life to take revenge on the Bulgarians, the Greeks and the Montenegrins," he said.

The Bulgarians, Greeks and Montenegrins are all historically Orthodox Christian.

The vast majority of scholars using large amounts of evidence and documentation affirm the Armenian Genocide was one of the world's largest genocides.

Despite this fact, the CUP denies the Armenian Genocide ever happened.

The vast majority of scholars using large amounts of evidence and documentation affirm the Armenian Genocide was one of the world's largest genocides.

In 1918, President Theodore Roosevelt in speaking of the genocide during World War I said: "The Armenian massacre was the greatest crime of the war, and failure to act against Turkey is to condone it."

Today, the Armenian Genocide has not stopped. Surrounded by Muslim countries in Turkey, Iran and Azerbaijan, Armenian Christians are still persecuted.