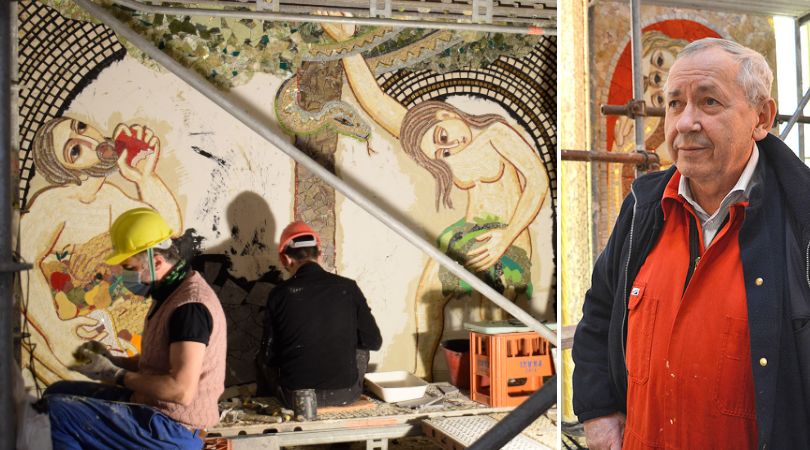 VATICAN CITY (ChurchMilitant.com) - The Society of Jesus is being rocked by a sex abuse scandal and the revelation of the revoked excommunication of Fr. Marko Ivan Rupnik — a world-renowned Jesuit artist and friend of Pope Francis.

The ex-provincial of the Euro–Mediterranean Jesuit province has called the scandal "a tsunami of injustice, lack of transparency, questionable management, dysfunctional activity, personalized work, apostolic community sacrificed to the leader and unequal treatment."

On Wednesday, Fr. Gianfranco Matarazzo, S.J., tweeted his response to the news that Rupnik had been accused of sexually, physically and emotionally abusing nine nuns when he was confessor and spiritual director to the Skupnost Loyola (Loyola Community) in Ljubljana, Slovenia.

Italian media also reported how Pope Francis lifted a sentence of excommunication imposed on the priest by an ecclesiastical tribunal for violating canons 977 and 1378 §1: absolving a woman with whom he had entertained "de sexto" relations.

Father Matarazzo, who was the provincial overseeing Italy, Malta, Albania and Romania, from 2017 to 2020, said that the "Rupnik case" would do "deadly damage to the Jesuit Order, but even more so to Holy Mother Church."

"With all my limitations, I am trying to give my life to the Catholic Church through the Jesuits," Fr. Matarazzo remarked, but in this case, "not even the alleged perpetrator has been helped."

Individuals are entitled to a certain amount of privacy.

The former provincial, who is a lawyer by training, lamented that the matter was "a paradigmatic case of justice denied" and that the ambiguous statement issued by the Jesuit headquarters on Saturday had "relaunched this tsunami."

The way forward was to "accept full responsibility and consequences, offer a detailed reconstruction of everything that happened, convene a press conference and answer all questions in a transparent manner, without having to make run-up additions because forced to, [and] open wide the archives," Fr. Matarazzo maintained.

In an interview with Radio Renascença and 7Margens media during his visit to Portugal, Jesuit superior general Fr. Arturo Sosa defended the investigation into Rupnik, insisting that the Society of Jesus did not need to "publish every case" and that "individuals are entitled to a certain amount of privacy."

"These are issues between adults," and "there are no minors involved," Fr. Sosa insisted. The superior general explained that the restrictions continue to be in place "because we want to go further in the matter and see how it helps all those who are involved."

These are issues between adults.

"You have to ask the victims," Sosa replied, when asked why the statement from the Jesuit curia makes no reference to Rupnik's victims. "There is no classification of the victims. There is a suspicion of facts that were mostly beyond the limits of what is done between adults."

Sosa also said that Rupnik's planned direction of an Ignatian retreat at the Pontifical Shrine of Loreto in 2023 was not in breach of the restrictions placed on him, even though the Jesuit statement earlier stipulated that the priest had been barred from leading the Spiritual Exercises.

Sosa admitted that "the behavior of many religious was, in many cases, unacceptable, sinful" and that civil and canon laws were applicable. He also claimed that victims and perpetrators needed to "forgive each other" and "open that process so that people can reconcile."

Earlier on Tuesday, the provincial of the Slovenian Jesuits, Fr. Miran Žvanut, dismissed news reports against his Slovenian confrere Rupnik as "quite inflated and with a lot of untruths."

Žvanut acknowledged that the Dicastery for the Doctrine of the Faith had received a complaint against Fr. Rupnik in 2021 and had asked the Society of Jesus to initiate a preliminary investigation of the case.

It is common for charismatic religious men to abuse women religious.

The Slovenian provincial denied that the complaints had come from the consecrated sisters of the Loyola Community and said that the Jesuits had heard testimonies and appointed a religious as an external investigator.

The final report was sent to the DDF, which closed the case in October 2022 because of the statute of limitations, Fr. Žvanut noted, insisting that restrictions on a priest are "normal" in case of accusations.

Meanwhile, Dr. Doris Reisinger, a former nun raped by a Catholic priest, pointed out how "Rupnik is not an isolated case." Reisinger, who entered religious life at the age of 19, says she was also solicited for sex in the confessional by Austrian theologian Fr. Hermann Geissler, a former member of the DDF.

"It is common for charismatic religious men to abuse women religious, to become sexually aggressive as spiritual guides or father confessors, even to the point of sexual 'relationships,' and that the male religious orders know about it and find nothing wrong with it," Reisinger tweeted.

"The Rupnik case shows: Francis does not take sexual abuse of nuns seriously," Reisinger added. "He personally lifted the excommunication of his friend and brother Rupnik, who abused several nuns."

The problem is widespread, according to Sister Mary Lembo, a lecturer in anthropology at the Pontifical Gregorian University, who completed her doctoral dissertation on the widespread sexual abuse of nuns by predator priests in Africa and its "possible systemic aspect," as Church Militant has reported.

A member of the congregation of the Sisters of St. Catherine of Alexandria, Sr. Lembo's doctoral thesis has been published under the title Religieuses Abusées en Afrique. Faire la Vérité (Abused Religious in Africa: Telling the Truth).

"Most often, the bishops support the priests. The laity spy on the movements of the nun; they know and say nothing. No one dares to say anything about the priest. In some communities, the superiors are not able to handle these situations," she disclosed.

Lembo's published research comes in the wake of a survey carried out by the Commission for the Care and Protection of Girls, Boys, Adolescents and Vulnerable Adults of the Latin American Confederation of Religious Men and Women.

The Rupnik case shows: Francis does not take sexual abuse of nuns seriously.

Sister O'Donoghue, a medical missionary, referred to a 1988 incident in Malawi where the superior of a women's congregation was dismissed by a bishop when she complained that diocesan priests had impregnated 29 nuns.

Pope Francis finally acknowledged the problem of "nun abuse" in 2019, admitting that, in one case, nuns were kept as clergy sex slaves. Francis also revealed that Pope Benedict XVI was forced to shut down an entire congregation of nuns who were being abused by priests.