Know the Faith: What Is Apostolic Succession?

A Biblical and Historical Perspective

The world is inundated with groups that claim to have originated with Jesus. How do we know which group actually has the historical pedigree to back up this claim?

The doctrine of apostolic succession is the doctrine that the bishops of the Catholic Church maintain ordinations that go back in succession to the Apostles of Christ. This means the Catholic Church can actually demonstrate its claim that it was established by Jesus, while the numerous Protestant sects are not able to do the same. Let's examine the biblical and historical arguments for apostolic succession.

Jesus Communicated His Authority to the Apostles.

Jesus said to His apostles:

The Authority of the Apostles Was Passed on to Successors 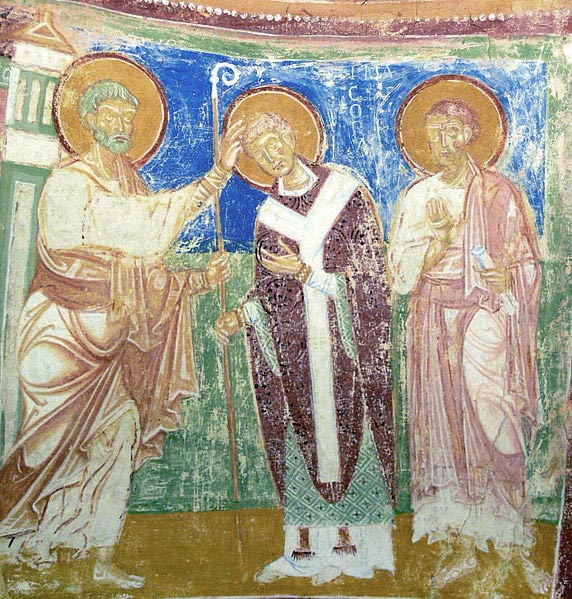 Scripture confirms this authority passed from the Apostles to their successors. Saint Paul said to St. Timothy, “And what you heard from me through many witnesses entrust to faithful people who will have the ability to teach others as well” (2 Timothy 2:2). Elsewhere, St. Paul said to St. Timothy, “For this reason I left you in Crete so that you might . . . appoint presbyters in every town, as I directed you” (Titus 1:5). We also read in Scripture, “They [the Apostles] appointed presbyters for them in each church” (Acts 14:23).

The Successors of the Apostles Appointed Further Successors

The earliest Christians, including the immediate successors of the Apostles, claimed to have had the authority of the Apostles. Saint Ignatius of Antioch, who was most likely a disciple of the Apostle John, said, “For we ought to receive every one whom the Master of the house sends to be over His household, as we would do Him that sent him. It is manifest, therefore, that we should look upon the bishop even as we would upon the Lord Himself” (St. Ignatius to the Ephesians).

Pope St. Clement of Rome, in the early second century, claimed the authority of the Apostles passed to their successors:

Through countryside and city [the Apostles] preached, and they appointed their earliest converts, testing them by the Spirit, to be the bishops and deacons of future believers. Nor was this a novelty, for bishops and deacons had been written about a long time earlier. . . . Our Apostles knew through our Lord Jesus Christ that there would be strife for the office of bishop. For this reason, therefore, having received perfect foreknowledge, they appointed those who have already been mentioned and afterwards added the further provision that, if they should die, other approved men should succeed to their ministry. (Letter to the Corinthians, 42:4″5, 44:1″3)

Tertullian, while debating the Gnostics, who claimed to have the true teachings of the Apostles, appealed to apostolic succession by stating that we can only know what Jesus and the Apostles taught by looking to the very churches they established:

From this, therefore, do we draw up our rule. Since the Lord Jesus Christ sent the apostles to preach, (our rule is) that no others ought to be received as preachers than those whom Christ appointed. . . . Now, what that was which they preached—in other words, what it was which Christ revealed to them—can, as I must here likewise prescribe, properly be proved in no other way than by those very churches which the Apostles founded in person. (Prescription against Heretics, 21)

Even Protestant scholars like JND Kelly testify to the historicity of apostolic succession:

[W]here in practice was [the] apostolic testimony or tradition to be found? . . . The most obvious answer was that the apostles had committed it orally to the Church, where it had been handed down from generation to generation. . . . Unlike the alleged secret tradition of the Gnostics, it was entirely public and open, having been entrusted by the apostles to their successors, and by these in turn to those who followed them, and was visible in the Church for all who cared to look for it. (Early Christian Doctrines, 37)

As we can see, the Apostles appointed successors, who in turn appointed further successors. These successors continue all the way to the present day within the Catholic Church. So the next time a Protestant tells you he is in accord with the teachings of the Apostles, ask him if he can demonstrate this through apostolic succession.