BRISBANE, Australia (ChurchMilitant.com) - Archbishop Mark Coleridge is asserting the decriminalization of abortion in Australia will lead to a culture of eugenics.

The archbishop spoke during March for Life Brisbane on February 11. The event hoped to create opposition for the upcoming decriminalization of abortion vote in the state of Queensland.

Under the current code, both the woman seeking an abortion and the abortionist providing the procedure can be put in jail. The proposed law, called Abortion Law Reform (Woman's Right to Choose) Amendment Act 2016, would remove certain sections of the Criminal Code which would, in fact, allow the procedure with no legal repercussion.

He commented that if abortion is struck from the Criminal Code, the value of life will degenerate and women will use abortion for the sake of convenience. He conveyed that abortion would then be used to kill disabled babies, calling it "eugenics." He said, "It is the kind of thing that went on in Nazi Germany."

He noted the use of abortion in China for population control and pointed out a new trend among Chinese women "having abortions because they are worried about their figure." He added, "At that point you have a culture in trouble."

(T)his type of legislation is very hard to reconcile with anything that resembles true Catholic faith.

The archbishop went on to say, "I think a government that is very strongly opposed to domestic violence but strongly in favor of greater access to abortion has a kind of a contradiction at its heart." He added, "It's a contradiction and probably is hypocrisy."

Two Queensland politicians, Labor Premier Annastacia Palazczuk and Deputy Premier Jackie Trad, are vocal advocates of the legislation and claim to be Catholic.

Coleridge said of them, "Whether they are both Catholic in name, I am not in a position to judge. But it would seem to me that to be a protagonist to this type of legislation is very hard to reconcile with anything that resembles true Catholic faith."

Trad and Palazczuk met with the archbishop on February 12 with the archibishop offering he to "counsel" them. They refused, and Trad commented on Facebook:

She commented the following day at a press conference, "I don't need counselling about my position on abortion. I have been pro-choice all my adult life." She continued, "I am a Catholic, but I'm also a woman, and I simply disagree with the Church's views on a woman's right to choose." She added, "It's also sad that we have reached a new low in this debate when women who have abortions are compared to Nazis."

The bill will be voted on by parliament sometime in March. 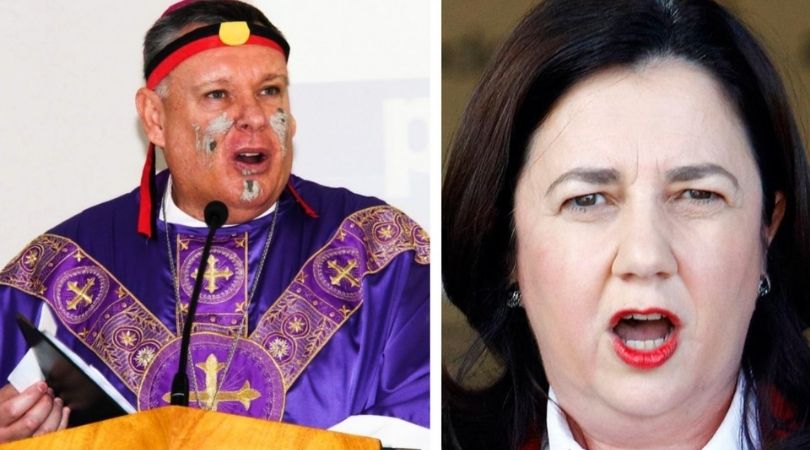