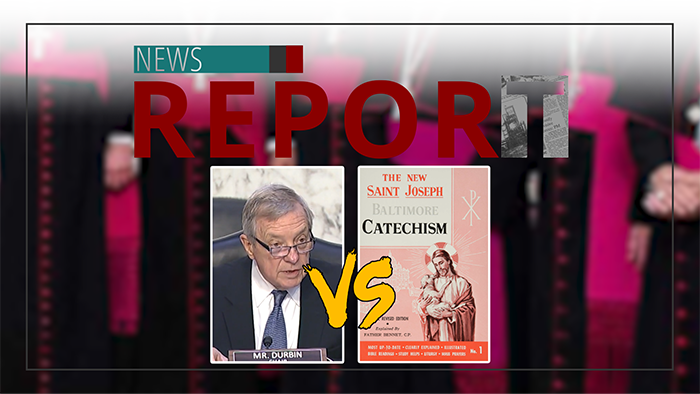 The result of poor catechesis

The U.S. bishops have a lot to answer for, including their role leading, or not leading, so-called Catholic politicians. Church Militant's Sam McCarthy corrects some of the "theology" spouted by Catholic-educated fake Catholics.

A fake Catholic is whining after his pastors decided to uphold the Church's teachings. In an interview last week, Illinois senator Dick Durbin complained his diocese has denied him Holy Communion since 2004, citing his pro-abortion voting record.

Sen. Dick Durbin, D-IL: "Listen, I am committed to women's rights under the law, reproductive rights, certainly. And our party is; we've made that part of our platform and position for a long, long time."

"It's been a long time since I took theology classes," the senator observed before launching into some particularly poor theology. Durbin explained, "I think the standard for receiving Communion is a well-formed conscience and where you come down as a result of that, and that is personal to the individual standing at the rail."

Wrong. First of all, enabling the murder of children in the womb doesn't meet the standard for a well-formed conscience: The Church tells us it's a mortal sin. Secondly, the Catechism of the Catholic Church clarifies, "He who is aware that he has committed a mortal sin must not receive Holy Communion, even if he feels great contrition, without first having received sacramental absolution" through confession.

But Durbin's bad theology didn't stop there — he proceeded to bemoan the supportive Catholic reaction to then-President Donald Trump and his use of the federal death penalty. Trump authorized the executions of 10 men in 2020, all convicted of grave crimes (while the abortion industry has been responsible, on average, for the deaths of over 900,000 children annually since 1990). There's simply no comparison, Dick.

So who's to blame for Durbin's bad theology? After all, he was educated in Catholic institutions, from Assumption High School through Jesuit-run Georgetown University. The bishops are to blame: the bishops who make illegal immigration a bigger focus than legalized child murder, the bishops who fear fake Catholic politicians like Joe Biden and Nancy Pelosi more than they fear sacrilege against the Blessed Sacrament, the bishops who don't and won't teach proper theology, when it's one of their only jobs.

Durbin's radical baby-murder legislation has earned him an 88% approval rating from abortion lobbying giant NARAL and a paltry 4.57 rating from the American Conservative Union Foundation. Cardinal Blase Cupich currently permits Durbin to desecrate the Blessed Sacrament in the archdiocese of Chicago.