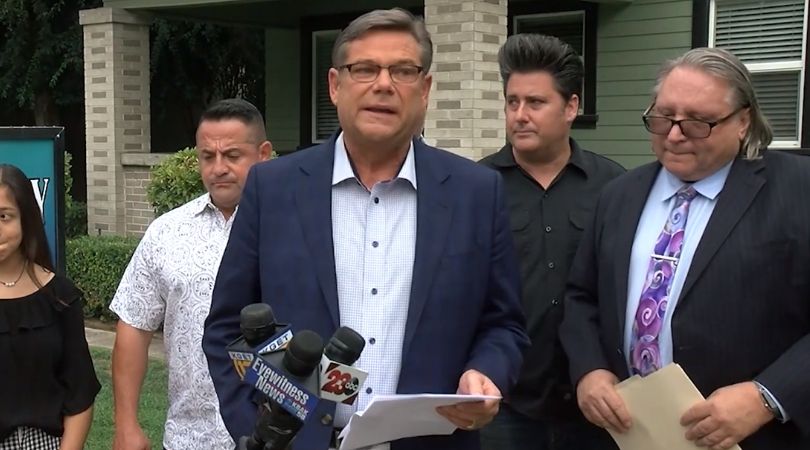 Church Militant obtained the 114-page investigative file from the Bakersfield Police Department, which announced July 25 it had closed its investigation into Harrison, accused by at least six men (although the actual number appears to be much higher) of sexual misconduct.

Harrison was placed on leave by the diocese of Fresno three months ago after allegations of abuse by multiple males. The day his investigation was closed, he gave a tearful press conference, where he claimed he was the target of "false allegations."

But a review of the file shows that Lead Investigator Randy Petris failed to interview 42 direct and indirect witnesses to Harrison's misconduct.

The stunning omissions have led critics to believe Bakersfield police — already suspected of being compromised for their longstanding friendship with Harrison, who served as their chaplain — conducted a sham investigation.

Petris conducted all the interviews, which in all totaled around 14.

One accuser, an Iraq war veteran, claims that as an adolescent altar boy, Harrison would grab his waist in the empty sacristy and grind his groin against the boy's, or engage in wrestling with him that became sexual in nature.

Petris concluded there was insufficient evidence to corroborate the claims.

Another accuser detailed his abuse at age 16 to the victims' assistance coordinator in the Fresno diocese, claiming Harrison had the boy sit on his lap while the priest touched himself under his shorts.

Initially seated across the desk from Msgr. Craig, he said, "come over here" and guided [alleged victim] to sit on his lap. Msgr. Craig started to massage his back in a manly way and then the touch got softer. ... Msgr. Craig then put his hand in his right pocket and he could hear jingling of coins and so he asked what he was doing and Msgr. Craig said he was getting money out of his pocket to give to him, he felt that he was really stroking or rubbing himself.

When the boy stood up, Harrison yelled, "You are f***ing ungrateful for what I am trying to do to help you." In his own statement to police, the alleged victim claims Harrison had an erection when he stood up.

Petris told him Harrison's conduct did not rise to the level of a crime, and even if it did, it was beyond the statute of limitations.

In the Bakersfield police investigative file is an email dated Apr. 17, 2019 from Br. Justin Gilligan, one of Harrison's accusers, writing to Teresa Dominguez, spokeswoman for the diocese of Fresno. In the email, Gilligan sets forth the names and contact information of 28 individuals with information on Harrison's alleged misconduct.

In a follow-up email, Gilligan provided two more names, including that of Stephen Brady, founder of Roman Catholic Faithful, whose own investigation in 2008 involved a former FBI agent who uncovered alleged abuse by Harrison of male teens.

Out of a total of 30 names given by Gilligan, the Bakersfield police interviewed only one.

Another monk, Br. Charles Rodriguez, offered 14 witness names to the Fresno diocese. The diocese turned over the email to Bakersfield police — who, again, only interviewed one: Roy Keenan, one of Harrison's adopted sons, who has publicly defended the priest while characterizing the accusers as liars.

Among the individuals not interviewed by Petris:

Church Militant contacted Stephen Brady, one of the names offered as a witness, who confirmed he was never interviewed.

"An officer from the Bakersfield Police Department did call me when I was in Fresno for a press conference earlier this year, asking that I drive or get a cab to the police station," Brady told Church Militant. "I asked instead that they interview me at my hotel room or send a squad car to get me. They refused."

He noted that the Firebaugh Police Department, which is conducting a separate investigation of Harrison, sent an officer to drive several hours to interview Brady at his hotel.

Although Petris had conducted a phone interview with another individual during the investigation, he chose not to interview Brady by phone.

Church Militant asked Sgt. Nathan McCauley, spokesman for the Bakersfield Police Department, why none of those individuals were interviewed, and why they decided to close the investigation without talking to any of them. He has offered no comment as of press time.

On Wednesday, Church Militant asked McCauley for his response to claims that Bakersfield police are "compromised" owing to their longstanding friendship and association with Harrison as their chaplain.

"I don't believe that's the case," said McCauley. "Feel free to look through the investigation," which he believed speaks for itself.

Church Militant asked the Fresno diocese for its reaction, but its spokeswoman said they were unable to comment while their own investigation was ongoing.

Church Militant also contacted two of Harrison's alleged victims (we have not been given permission to release their names), who expressed shock and disappointment that so many witnesses were not interviewed.

Several witnesses, including two of Harrison's adopted sons, claimed they saw no inappropriate touching or horse play with the priest, while another man who spent time with Harrison in the 1990s and who defended his character, admitted he did in fact witness the priest rough-housing and engaging in horseplay with multiple minors, both male and female.

His testimony goes against that of Harrison's own, whose statement to police categorically denies that he ever engaged in horse play. This contradiction is not addressed by Petris during his questioning of Harrison.

Only days after Bakersfield police closed its investigation into Harrison, his parish was found vandalized, the word "rape" spray-painted in multiple places around the church. Local police are still investigating the incident.

Both the Firebaugh and Merced police departments are continuing their investigations into Harrison for separate abuse allegations. The Fresno diocese continues to look into the claims to determine whether Harrison will be returned to active ministry.