DIY Mass Is ‘Catalyst for Reform’ 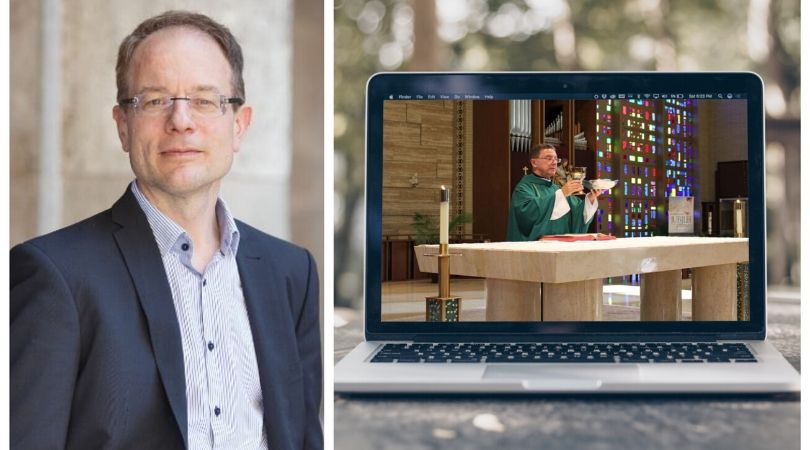 BONN, Germany (ChurchMilitant.com) - A leading Viennese dogmatist is sounding the alarm on "do-it-yourself" Masses leading to "free-floating, if not sectarian forms of Christianity," after progressive theologians claimed lay Catholics could consecrate Communion elements by placing bread and wine in front of the screen during a televised Mass.

Professor Jan-Heiner Tück is warning that the "temporary ban on assembly in the corona-crisis is being used as a catalyst for reform," to combat perceived clericalism so that the "sacramental principle of ordination will be eroded."

"Renewal of the tradition takes place through carefully considered readjustments in the interplay of continuity and discontinuity," he explains.

On March 27, the day of Pope Francis' special Urbi et Orbi blessing for the cessation of the Wuhan virus, pastoral theologian Johann Pock recommended that if the pontiff could impart a "complete indulgence" by television to the whole world, "why then can't the bishop of a diocese celebrate the Eucharist for his entire diocese — with believers in front of their screens actively participating and making this not just a spiritual, but an actual communion with bread (and wine) at the table?"

"Who can say that Jesus is present here under the different forms of word and sacrament?" Pock asked, pushing his proposal further, suggesting no priest was needed at all to consecrate the elements: "And if this house community does this without a screen — isn't Jesus present?"

Revolution is not a vehicle to advance reforms in the Catholic Church.

Pock, dean of the Faculty of Catholic Theology at the University of Vienna, argued that the Wuhan virus crisis would serve to move the laity away from a priestly focus "towards recognizing their common baptismal calling."

Thus, celebration in the home community could happen without a priest in the presence of Christ, Pock noted, using the category of "priesthood of all believers."

"Wouldn't that be a chance to say: 'Where two or three are gathered in my name, I am in the middle of them?'" he asked.

Tück rebuts the allegation of clericalism in the sacramental life of the Church: "Instead of gratefully acknowledging that priests can give laypeople what they cannot give themselves, Mass celebrations without believers are not only criticized as priest-centered but also defamed as pre-conciliar."

Meanwhile, Dortmund theologian Thomas Ruster is also claiming that the lack of a physical presence of a priest does not need "to be an absolute obstacle."

Adopting a highly Protestantized theology, Ruster privileges Word over sign: "The Word as a word of blessing and promise is the decisive factor. The Word is strengthened and underlined by the physical sign. But it is also perceptible and understandable without the sign: It is a question of the medium how to get the Word across."

Individual priests "must decide what they do on their own responsibility. I would also encourage you not to be too restricted by legal obligations," he says, as "sacramental law provisions are not set for eternity; they can be adjusted and changed."

"This shows that there is some leeway. The laying on of hands has not been considered a sign for centuries, so it would be conceivable to carry out the sacrament without direct contact — even if that is not the case at the moment," Ruster claims in an interview.

Biblical scholars note that the act of "laying on of hands" occurs 29 times in the New Testament, referring to healing, blessing, imparting the Holy Spirit and ordination to office in the Church (1 Tim 4:14, 2 Tim 1:6, Acts 13:1–3).

For confession, "there is no need for an immediate physical presence" as "in confession, people have long wondered what the bodily sign is and has not found one," he argues, proposing that "confession is thus possible as a 'remote sacrament' and does not require direct physical presence."

"Analogously," he observes, as counseling interviews in Catholic marriage counseling centers are carried on by phone, "it would also be conceivable that confessions would be carried out in other forms, for example by video conference, online or by telephone. I don't see any difficulties there."

Ruster also endorses a "media-mediated" anointing of the sick which "can also be expressed without direct physical contact ... through an anointing ceremony broadcast on television or the internet."

Asked if Jesus' healing of the centurion's servant from a distance could be interpreted as a "remote sacrament" in the Bible, Ruster replies: "Yes, it is a kind of distance healing that Jesus pronounces without facing the patient face to face."

Since the centurion does not ask for touch but only that Jesus "speak the word and my servant shall be healed" this "can certainly be used as a creative interpretation to practice sacraments in this new mode of distance," says Ruster.

What sacrament means can best be recognized from Jesus himself and from his actions, because he is the primeval sacrament, the sacrament of God par excellence: God who enters our world. Therefore, we also have the right to measure Jesus on how to deal with sacraments in practice.

Tück categorically rejects the "divisive" proposals of the progressives: "Sacraments are tied to physical presence, no baptism without water, no confirmation without chrism, no Eucharist without bread and wine. This cannot be circumvented."