Bd. Elizabeth of the Trinity on Way to Sainthood

The French Carmelite nun is considered a spiritual sister to St. Therese of Lisieux

VATICAN (ChurchMilitant.com) - A French Discalced Carmelite nun is on her way to sainthood. Blessed Elizabeth of the Trinity, who lived in a Carmelite convent in Dijon, France in the early 20th century, is among four other blesseds whose causes will be voted on at a Vatican consistory June 20. 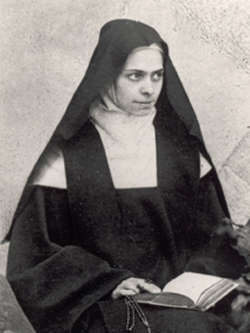 Elizabeth Catez was born in 1880 in a French military camp. She would die 26 years later from Addison's disease, her body so ravaged by the illness it would seem like a skeleton. As a girl, she was known for her strong will and fierce temperament, frequently prone to outbursts of anger. She was also a gifted classical pianist and an attractive young woman who enjoyed the latest fashions, and was even engaged to be married at one point.

In her teens she felt a strong calling to Carmel, and after years of opposition from her mother, she was able to join the convent in Dijon in 1901 at age 21 after her mother granted permission. On entry, she wrote. "I can't find words to express my happiness. Here there is no longer anything but God. He is All; He suffices and we live by Him alone."

The prioress immediately noticed a disposition for sainthood in Elizabeth, who exhibited a profound love for Our Lord, and who also felt a kinship toward fellow Discalced Carmelite St. Therese of Lisieux, whose autobiography was being circulated among Carmels in France. Elizabeth developed a deep devotion to the Holy Trinity, taking that as her religious name.

She said she hoped her name in Heaven would be "Laudem Gloriae" ("Praise of Glory"), and wrote of her heavenly mission:

I think that in Heaven my mission will be to draw souls by helping them to go out of themselves in order to cling to God by a wholly simple and loving movement, and to keep them in this great silence within that will allow God to communicate Himself to them and to transform them into Himself.

Shortly after joining Carmel, Elizabeth was diagnosed with the then-incurable Addison's Disease, which attacks the adrenal glands and eventually makes it impossible to eat or drink. Elizabeth wrote some of her most beautiful and contemplative letters during this time of suffering. Towards the end, she was able to eat less and less, until the last week, when she ate and drank nothing at all.

In the midst of this, she resigned herself to God's will, even saying she would be content for God to send her many more years of suffering if it were His will. She passed away November 9, 1906. Her last words were: "I am going to Light, to Love, to Life!"

Pope Francis officially approved a second miracle attributed to Elizabeth on March 3 involving a Belgian woman suddenly healed from an illness after visiting Elizabeth's convent. Marie Paul, a religion teacher in Belgium, noticed in 1997 that she was having trouble speaking. After undergoing medical tests, she learned she had contracted the incurable Sjogren's disease, which gradually affects various parts of the body. She was forced into early retirement, after which a number of people prayed a novena to Bd. Elizabeth of the Trinity for healing.

Marie-Paul underwent chemotherapy and corticosteroid therapy, but the situation only worsened and she seemed to approach death. She decided to make a pilgrimage to the Carmel in Flavignerot to visit Bd. Elizabeth's cell — still preserved since her death in 1906 — to thank her for sustaining her during the course of her illness. On April 2, 2002, after praying in the chapel at the Carmel, she stood up, raising her hands to Heaven, and cried out in wonder, "I have no more illness!" Marie-Paul was able to resume normal life from that moment on.

The miracle was submitted to an independent group of doctors to verify, who claimed there was no natural explanation for her healing, and the diocese ratified the supernatural nature of the event.

The other blesseds who will be voted on at the June 20 consistory include Bd. Salomone LeClercq, a martyred French priest; Bd. Manuel González García, Bishop of Palencia and founder of the Eucharistic Missionaries of Nazareth; Bd. Ludovico Pavoni, founder of the Sons of Mary Immaculate; and Bd. Alfonso Maria Fusco, founder of the Sisters of St. John the Baptist.