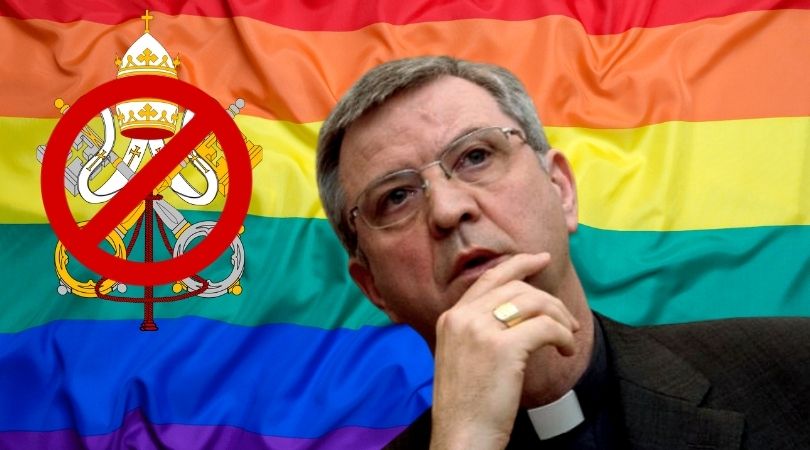 ANTWERP, Belgium (ChurchMilitant.com) - A Belgian bishop apologized to all who feel that the Vatican's recent reaffirmation of the sanctity of Christian marriage and the inadmissibility of blessing homosexual unions, saying of gay couples: "Their pain is mine today."

Writing as a "bishop and theologian," Bp. Johan Bonny of Antwerp on March 17 wrote an op-ed for the Flemish-language De Staandard in reference to the declaration by the Vatican Congregation for the Doctrine of the Faith that ruled out any blessings for same-sex couples as "illicit" and "unlawful."

In response to the directive, Bp. Bonny wrote that he apologizes to "all for whom the Vatican's position is painful and incomprehensible." He identified those possibly offended: "faithful and Catholic committed gay couples, parents and grandparents of gay couples and their children, pastoral workers and counselors of gay couples."

Bonny claimed near the end of the article that the Vatican declaration is not "substantive" and does not align with his understanding of the 2015 Synod of Bishops on marriage and the family.

He wrote: "That is unfortunate for faithful gay couples, their families and friends. They do not feel they are just and treated truthfully by the Church. The reaction is already underway." He noted that he was a participant in the Synod and wrote parts of the final report to Pope Francis. "God has never been stingy or pedantic in blessing people. He is our Father. That was the theological and moral mindset of most of the Synod fathers," he wrote.

'Sin' is one of the most difficult theological and moral categories to define, and thus one of the last to attach to persons and their way of living together.

In 2016, Pope Francis issued his apostolic exhortation, Amoris Laetitia, which affirmed Church teachings about sexuality, marriage, divorce, the Eucharist and many other issues. It also reaffirmed that the Church only recognizes as marriage the union of one man and one woman.

Nonetheless, the document has been roundly criticized by eminent Churchmen, including Cdl. Raymond Burke, who declared that it merely comprises the pontiff's "personal reflections" rather than magisterial teachings.

In his op-ed, however, Bp. Bonny wrote that the recent declaration is "unfortunate for the Church." Alluding to the pope's oft-repeated insistence that Christians should engage in the "art of accompaniment" limned in his earlier apostolic exhortation, Evangelii Gaudium, Bonny wrote: "This response is not an example of how we can travel together. The document undermines the credibility of both the 'Synodal Path' advocated by Pope Francis, and the work year announced with Amoris Laetitia. Does the real Synod want to stand up?"

The Church in Germany is adopting practices that defy Church teaching

Bonny slammed the Vatican declaration, writing that it lacks "the pastoral care, the scientific basis, the theological nuance and the ethical care" that were ostensibly present at the 2015 Synod.

Offering his exegesis of the declaration, Bonny wrote that it affirmed that in "God's plan" there is no resemblance between the sanctified marriage of one man and one woman to a same-sex union. He claimed to know "gay couples, civil married, with children, who form a warm and stable family, and who also actively participate in parish life." Moreover, he affirmed that they are "full-time as pastoral or church staff."

The Flemish bishop appeared confused about the definition of sin, writing: "'Sin' is one of the most difficult theological and moral categories to define, and thus one of the last to attach to persons and their way of living together."

Bonny wrote that it affirmed that in 'God's plan' there is no resemblance between the sanctified marriage of one man and one woman to a same-sex union.

Bonny claimed that the 2015 synod discussed "appropriate rituals and gestures to integrate gay couples, even in the liturgical domain," that somehow would respect "the theological and pastoral distinction between a sacramental marriage and the blessing of a relationship."

Writing that using the Church's Order of Blessing would be disrespectful of same-sex unions, Bonny wrote that blessings should take place within the order of service for marriage and utilize a "variation on the theme of marriage and family life" while recognizing "actual similarities and differences."

Sacred Tradition and the Catechism of the Catholic Church have long taught that homosexual relations are "intrinsically disordered" and "contrary to natural law," as well as closed to the transmission of life in the sexual act. Persons experiencing homosexual attraction, says the Catechism, are called to chastity, as are all unmarried Christians.

Nevertheless, there are clerics and prelates who find affirmation for homosexual behavior.

According to America Magazine, Fr. Bryan Massingale, who identifies as "gay," said that as all persons are born with a desire to love, it is "crushing" for those with a homosexual orientation to have it described as "inherently or innately sinful without any qualification." Fr. Massingale teaches Christian ethics at the Jesuit Fordham University.

Father James Martin, S.J., the editor of America Magazine who has long been known as an LGBTQ advocate, tweeted Bp. Bonny's reflection on Wednesday. He wrote that the support that gay marriage has found among some German prelates prompted the Vatican declaration on the issue.

The leader of the German bishops, Bp. Georg Bätzing of Limburg, said on March 15 that he was not "happy" about the declaration. According to the Catholic press in Germany, Bätzing said: "This gives the impression that the theological debate, which is currently being debated in various parts of the Universal Church, including here in Germany, is to be ended as quickly as possible."

For Bätzing, ending the discussion is not possible:

[T]he discussion is intense and with good arguments in many places, and the theological inquiries about pastoral practice today cannot simply be put out of the way with one word of power. The points of view put forward by the Congregation for the Doctrine of the Faith today must and will, of course, find their way into the discussions of the Synodal Way.

The so-called Synodal Way in Germany has not only produced documents in favor of blessing homosexual couples, but also allows non-Catholics to receive Holy Communion in Catholic liturgies. For example, in February, Bätzing said that he does not deny the Eucharist to non-Catholics.

However, some German bishops have expressed approval of the Vatican declaration, including Bp. Rudolf Voderholzer of Regensburg, and Bp. Stefan Oster of Passau, who said blessing same-sex couples is "leading to polarization," while help from the Vatican can bring "greater unanimity."