The College of St. Benedict and St. John's University of Collegeville, Minnesota is one of the oldest Catholic liberal arts colleges in the United States. According to its website, it is "nationally recognized for its promotion of character and values development."

It prides itself on its Benedictine heritage, noting that it "is shaped by the Benedictine communities that founded the colleges in the 19th century and continues to foster the academic, spiritual and social life of these institutions."

Despite its Catholic credentials, the university supports a student theater group called the Alter Boyz that uses blasphemy, obscenities and graphic sexual references and depictions in the name of comedy.

Church Militant contacted the university, which confirmed that the club is an officially approved student group and holds open auditions for their performances on campus.

These shows and skits are presented at several locations on campus, including the Stephen B. Humphrey Theater near St. John's Abbey. While the group is not advertised on the university website, they do have a Facebook page where many of their shows are posted for public viewing. Their motto is: "Forgive us, Father, for we have sinned."

This is a five-minute clip of the opening of Alter Boyz' fall 2018 show. The rest is too explicit to feature.

Throughout the shows, the students use Jesus' name in vain and curse and blaspheme God. The offensive material includes dozens of uses of the F-word, sexual jokes, gestures, situations and references, and "humorous" statements, including:

One scene introduces a character named Handy Helper who unzips a man's fly zipper in front of a urinal. At the end of the scene, Handy Helper zips it back up when the man leaves the bathroom, the story implying that the man needed "a hand," i.e., was masturbated in front of the urinal.

The sketch continues with significant innuendo in a scene with a wife and a husband who "couldn't keep it up" and needed Handy to save their relationship. The character's tagline is: "When you feel like a pansy, get a little handsy."

Another scene includes a fake tour of the campus dorms in the style of a nature show, observing students of St. John's in their "natural habitat." A student is shown walking down the stairs after having "coital relations," washing out a condom in the kitchen sink. When he fills it with water, water sprays out, showing that holes were poked in the condom. The student then uses a thumbtack to attach the condom to a board labeled "Community Condom."

Another scene depicts a member of Alter Boyz talking to God in an attempted humorous take on prayer. During the skit, the script reads:

"Did you just take your own name in vain?"

"Well technically I took Jesus' name in vain, but even more technically we're kind of the same person. It's just a lot of Catholic mumbo *indistinct* Trinity. Never mind, it's not important."

In another scene, the actors reference the fact that St. John's is an all-boys school while talking about the character's desire to pay for homosexual intimacy after breaking up with his girlfriend.

They then speak graphically about a homosexual act between two male characters, and then act it out with sound effects and moans.

The graphic homosexual content of these skits comes against the backdrop of widespread homosexual clergy abuse at St. John's Abbey, which has suffered almost 100 allegations of abuse by monks and priests since the 1930s, and is the defendant in 60 lawsuits. In 2017, the university published the names of 21 men credibly accused of sexual misconduct, ranging from inappropriate comments and advances to sodomizing male minors.

According to the abbey website, at least six men on that list may still be monks at the abbey, meaning they are still in close proximity to vulnerable students at the university. 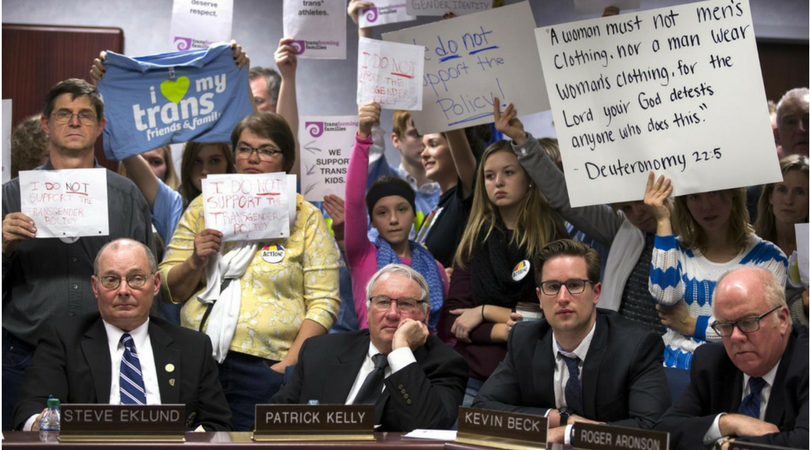