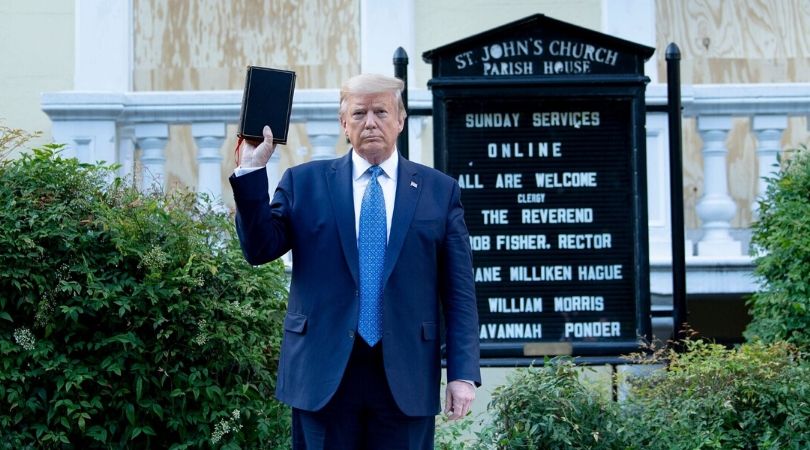 Saints Andrew Cuomo and Nancy Pelosi, shining models of Catholicism, have scolded Donald Trump for having the gall to hold up a Bible in front of St. John's Church in Washington.

The church, which had just been firebombed by "protesters," was the place Trump chose to show solidarity with Christians and symbolically uphold the soul of this nation. It was met with deep scorn and continuous attack by the progressive Left, many of whom call themselves Christian. In fact, the photo has caused much more outrage in their hearts than looters setting fire to the same church.

Cuomo, governor of New York — and son of the late Gov. Mario Cuomo, one of the "Catholic" architects of the gravely erroneous "personally opposed, but…" political stand on abortion — was one of the chorus of leftist politicians, media types and clergy that took shots at Donald Trump. Cuomo, who in 2019 fought for and rejoiced over a new law that enshrines legalized killing of innocent children up to the moment of birth and beyond, decided to school President Trump on Holy Scripture.

"The president held up the Bible the other day in Washington, D.C.," Cuomo said, beginning his attack as he held up a Bible."Here in New York we actually read the Bible, and there are some passages that I think are especially appropriate today," the pro-death governor proudly asserted. Then he went on to read certain sacred passages:

Cuomo, who in 2019 fought for and rejoiced over a new law that enshrines legalized killing of innocent children up to the moment of birth and beyond, decided to school President Trump on Holy Scripture.

"Blessed are the peacemakers, for they will be called children of God," he quoted from the Gospel of Matthew. "If a house be divided against itself, that house cannot stand," he read from Mark. "Turn away from evil and do good. Search for peace and work to maintain it," he read from the Psalms. "The seed whose fruit is righteousness is sown in peace by those who make peace," he cited from the letter of James.

"I think those words are all appropriate for where we are today," Cuomo said, before resuming a press conference.

Not to be undone, fellow anti-Catholic Catholic Nancy Pelosi also read from the Bible from her political pulpit to jab at President Trump.

"Last night when I saw the president holding up the Bible, I was thinking of so many things in the Bible that would have been appropriate in terms of the humanity of all people in our country," she said. Incoherently, she continued her observation of Trump, which included pieces of Bible passages. "The time for every event under Heaven. He talks about a time to heal — talks about embrace and time to shun embracing, how about that. ... A time for peace. Let's focus on the time to heal," she urged, citing the book of Ecclesiastes.

"We would hope that the President of the United States would follow the lead of so many other presidents before him to be a healer-in-chief and not a fanner of the flame," she said.

It seems that Cuomo and Pelosi may have been reading from the wrong book, if seeking confirmation of the progressive worldview was one of their aims. Truth serum may have led them both to an alternative rendition of the Beatitudes that more closely fits the "progressive" ideology:

It is not the kingdom of Heaven to which this ideology leads, but an alternative one.

With regard to the undying support in the name of compassion for policies that break down the family and kill innocent children, there is a Bible passage that one should always be aware of: "Woe to those who call evil good, and good evil" (Isaiah 5:20).

Along with anti-Catholic Catholic politicians like Biden, Cuomo and Pelosi — the power trio being used to take down President Trump — countless other Democrats have criticized the president's photo. This includes the female Episcopal bishop of the District of Columbia, who said the president had "used our sacred text as a symbol of division."

Woe to those who call evil good, and good evil.

Perhaps she has forgotten the critical words of Jesus Himself, recorded in the gospels of Matthew and Luke: "Do you think that I have come to establish peace on the earth? No, I tell you, but rather division. For I have come to set a man against his father, a daughter against her mother, and a daughter-in-law against her mother-in-law; and one's enemies will be those of his household" (Luke 12:51, Matthew 10:35–36).

John 14:6 says that's what truth does: It divides those who love and to submit to it against those who deny and rationalize it. As self-proclaimed Catholics Cuomo, Pelosi and Biden ought to know, peace can only be realized when life is centered on truth — objective truth, not mine or yours.

On this week of Pentecost, it would behoove everyone to ask the Holy Spirit to enlighten our minds and purify our hearts so that we may all know and submit our lives to the truth, despite the sacrifices. Regardless of one's ideological or political affiliation, this is the only way to real freedom (John 8:32) and peace.