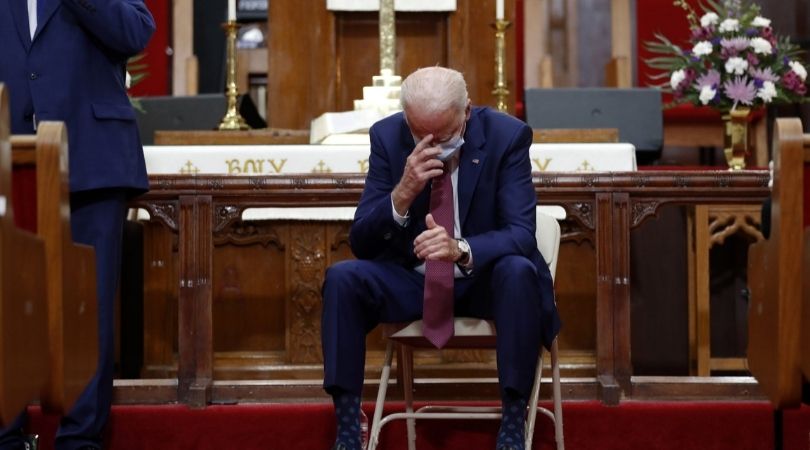 'Ate and drank his own spiritual death'

The pre-inauguration Mass at the grand Cathedral of St. Matthew in Washington, D.C. on Wednesday had many faithful questioning how Catholicism is playing out in the new political era of Joe Biden.

The homily delivered by Fr. Kevin O'Brien, a Jesuit priest and president of Santa Clara University in California, served as a case in point.

O'Brien compared John F. Kennedy, the first Catholic to become a U.S. president, with Joe Biden, who self-identifies as Catholic but publicly spurns the pre-eminent issues of the Faith.

"Sixty years ago, John F. Kennedy ... attended Mass on the morning of his inauguration, across town at Holy Trinity Church in Georgetown," the Jesuit began. "Today, our President-elect and Dr. Biden have gathered family and friends to begin this inauguration day of another Catholic president in the same spirit of prayer and thanksgiving."

The comparison of Kennedy to Biden made a dissonant sound — like scratching on a chalkboard. It unduly imbued Biden with the respect and mystique Kennedy, despite his many private sins, still holds among the public around the world.

Catholic author Austin Ruse, in his recent Crisis Magazine article, hit the proverbial nail right on the head spelling out the difference between the two men. Distinguishing "heretic" from "sinner," Ruse wrote:

I am not aware that Kennedy was a dissenter in matters of the Faith, let alone a heretic. He was a sinner, to be sure, just like all of us. But it is my firm belief that when that bullet let fly from the Texas School Book Depository and in the split second before it entered Kennedy's brain that all those millions of Aves recited for him by Catholic grandmothers reached out from the beatific vision, and he was given a moment of contrition for his sins.

Another comparison was made by O'Brien, but this one to the Son of God. He likened Biden's then-upcoming inaugural address to what he called Jesus Christ's "inaugural address" in Luke 4:14–21.

The Jesuit diminished the mission of Christ by equating it with Biden's mission to "care for the poor, free the oppressed and relieve people of their burdens."

O'Brien's selective and abbreviated social-justice version of Christianity, of course, lacked the supernatural scope of Jesus' mission. The priest itemized corporal works of mercy — "to care for the poor, free the oppressed and relieve people of their burdens" — but excluded Christ's central mission, the spiritual salvation of mankind.

The Douay-Rheims version gives the fuller picture. According to St. Luke 4:18-19, the Isaiah scroll reads:

He hath anointed me to preach the gospel to the poor, he hath sent me to heal the contrite of heart, To preach deliverance to the captives, and sight to the blind, to set at liberty them that are bruised, to preach the acceptable year of the Lord, and the day of reward.

There is something else that the homilist omitted to say, which Ruse blasted:

Joe Biden is an enemy of the Catholic faith. This fact must be repeated as often as humanly possible. Joe Biden holds himself out as a faithful Catholic, yet he does not believe in the Faith's fundamental teachings about the human person or human sexuality.

"Biden is an abortion extremist. He favors abortion through all nine months of pregnancy and beyond," attested Ruse.

Then comes another elephant in an already crowded sanctuary. Joe Biden was given — and received — Holy Eucharist.

"Joe Biden ate and drank his own spiritual death," Ruse described. "That he received the Holy Eucharist from the hands of a cardinal of the Church adds scandal upon scandal."

"One radio wag called it a Mass for Planned Parenthood. And so, it was," he added.

And if all that weren't enough — the faithful wondered what Kamala Harris and her husband Douglas Craig Emhoff were doing at this Mass. Good for Harris and Emhoff if some graces of conversion came their way from prayers recited by the faithful. But did Vice President Lyndon B. Johnson and his wife Lady Bird attend Kennedy's inauguration Mass? What did the anti-Catholic Harris' presence in the grand cathedral signify?

Harris' anti-Catholic bias is legion — she attacked Supreme Court Justice Amy Coney Barrett for her belief in the tenets of the Church, raided the home of pro-life journalist and activist David Daleiden and has stauchly advocated for Planned Parenthood as part of her various political campaigns.

Author Peter Schweizer, in Profiles in Corruption, detailed Harris' failure as district attorney of San Francisco in the early 2000s to follow through on 75 years' worth of clerical sexual abuse allegation in the archdiocese. This failure came despite urgings from multiple victims groups but after donations flowed into her election campaign from Church officials.

"Joe and Jill, you ground this day in your faith," the shepherd-priest declared.

But faithful Catholics wonder what belief — or "unbelief," as Ruse puts it — the priest was talking about. Ruse opines:

Joe Biden holds himself out as a faithful Catholic, yet he does not believe in the Faith's fundamental teachings about the human person or human sexuality. What's more, he advances this unbelief in public policy and will now have the full force of the federal government behind this unbelief.

Faithful Catholics are bound to wonder if the 78-year-old Biden is a bad sheep or the product of bad shepherding.

Ruse attributes Biden's heterodoxy and heteropraxy to the failure of the hierarchy. He told Church Militant yesterday, "Biden should have been corrected decades ago by his bishop. I honestly do not know why his bishops or others do not care about his soul and the souls of all those given scandal by his behavior."